American Conservatives have been bemoaning judicial activism since at least the 1950s, but the problem is getting worse. Today, courts mandate the release of criminal aliens into our communities even as they jail peaceful Christians for refusing to play along with “gay marriage.” Yet cowardly Conservatism Inc. apparatchiks still refuse to confront judicial tyranny, fearing negative consequences that might flow from “extreme measures,” and content themselves by vainly hoping future Republicans will appoint more strict 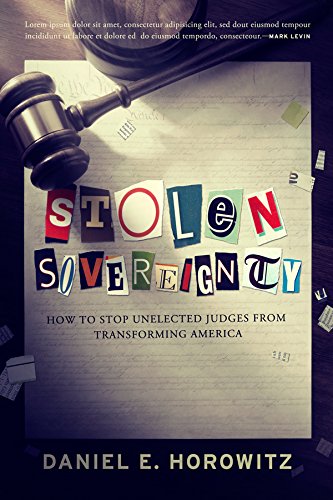 constitutionalists.  In his new book Stolen Sovereignty: How to Stop Unelected Judges from Transforming America, Conservative Review’s Daniel E. Horowitz, a long-time VDARE.com favorite, urges his fellow conservatives to abandon such vain hopes and gird up their loins for a death struggle against the out-of-control judiciary.

Horowitz points out that recent court decisions represent a new level of judicial imperialism that would have made Earl Warren blush. In its gay marriage decree, the Supreme Court mandated a social revolution in the name of a concept not only utterly absent from the Constitution, but non-existent until a generation ago. In failing to strike down Obamacare, the Supreme court endorsed government compulsion on Americans to buy a private product, viz., health insurance. As Horowitz points out, this amounts to granting the government power to regulate not merely citizens’ actions but even their non-action. Furthermore, by upholding the individual mandate as a function of Congress’s power to levy taxes, Justice Roberts in effect rewrote Obamacare from the bench, setting a precedent for the courts to act as a kind of super-legislature.

Judges have recently granted a foreign power (Mexico) standing to sue on behalf of its citizens who have entered the US illegally. They have also begun applying international law to overturn American law. None of these judicial usurpations were imaginable even twenty years ago.

Such wrongs cannot be righted simply by electing more Republicans to office. As Horowitz points out, the GOP bats about .500 at appointing “strict constructionists,” whereas Democrats have a close-to-perfect record of appointing post-constitutionalist judicial Supremacists.

Moreover, many “conservative” jurists accept a one-way understanding of stare decisis—the doctrine of precedent—that requires them to uphold unconstitutional decisions of past Leftist judges as precedent, even when those decisions themselves were reversals of long-standing settled law.

In just eight years, Obama managed to replace 40 percent of the federal judiciary. We will be stuck with many of these characters for a long time to come. It is too late to play catch up.

Horowitz is particularly acerbic about conservatives who cling to the illusion that their enemies care about consistency. The same courts that think the government can force citizens to buy insurance do not believe the government is authorized to deny citizenship to the children of illegal aliens. The same courts which grant standing to legal standing to foreign governments and illegal aliens refuse such standing to Immigration and Customs Enforcement personnel and elected American sheriffs.

In a word, American courts have no legally consistent jurisprudence at all. As Horowitz says, they are only consistent in

[S]iding with the preferred left-wing political outcome and backfilling it with incomprehensible and appallingly hypocritical legal analysis. When its suits their preferred outcome, they will side with the states over the federal government and vice-versa, even when the legal rationale is internally conflicting.

Chain migration, besides the sheer numbers it brings in, removes the authority to decide who can become American from Congress and gives it to immigrants themselves.

Voting by illegal aliens and the counting of illegal aliens for purposes of congressional reapportionment dilute the votes of American citizens and unfairly increases the political clout of urban areas heavily settled by illegals.

Recently, there was a case before the Supreme Court in which two Texans from rural counties sued the state for debasing their franchise by empowering citizen voters in large immigrant districts. A majority of justices signed onto an opinion indicating that states not only had the right to include illegal aliens in drawing the maps, they had a constitutional mandate to do so.

But perhaps the most outrageous example of immigration-related judicial usurpation:  Birthright Citizenship. No statute has ever granted citizenship to the children of foreigners, let alone the children of illegal aliens. The practice, as Horowitz writes

[L]ikely evolved from sheer laziness… The relevant agencies never bothered to enforce verification and give the hospitals forms that required one parent to show their Social Security card. It was only after the problem became pervasive and conservatives began calling attention to it in the early 90s that liberals retroactively created a convoluted legal rationale… to defeat popular and common-sense efforts to end the practice.

The heart of Horowitz’s book is the ninth chapter, which advocates specific measures for reigning in the judiciary. He thinks impeachment is a non-starter, for it would require a two-thirds majority of the US Senate, and votes can be counted to split along party lines. Constitutional amendments would require similar supermajorities.

But neither of these more drastic remedies is even necessary. The Constitution gives Congress very broad powers to regulate the judicial branch.

Article I, Section 8 and the Judicial Vesting clause of Article III, Section 1 give the legislative branch full authority over the creation of the “inferior courts and tribunals,” i.e., all courts except the Supreme Court. The Supreme Court itself ruled in 1812 that lower courts “possess no jurisdiction but what is given them by the power that creates them, and can be vested with none but what the power ceded to the general government will authorize them to confer.”

As for the Supreme Court itself, the Constitution grants it just three spheres of original jurisdiction which cannot be removed from it without a constitutional amendment:

Horowitz quotes many founders and justices of the early Republic in support of Congress’s power to regulate the judiciary: Alexander Hamilton, John Marshall, Edmund Randolph, Joseph Story and Roger Sherman.

A famous precedent for jurisdiction-stripping: an act of the Radical Republican-led Congress of 1867. This Congress had previously passed a Military Reconstruction Act, under the provisions of which a Southern newspaper editor was arrested. He appealed his case all the way to the Supreme Court—and, to prevent the Court from letting him out of prison, Congress quickly repealed the section of the Military Reconstruction Act which granted the Supreme Court appellate jurisdiction on the matter.

We are not at liberty to inquire into the motives of the legislature. We can only examine into its power under the Constitution, and the power to make exceptions to the appellate jurisdiction of this court is given by express words.

Most recent attempts at jurisdiction-stripping have gotten nowhere. But one significant exception was the Prison Litigation Reform Act of 1996. Horowitz says:

Following decades of federal intrusion in criminal justice in which the courts would grant all sorts of rights to prisoners and invalidate different forms of incarceration, Congress passed a law regulating the court’s ability to strike down such arrangements. The bill was signed into law by Bill Clinton and upheld by the Supreme Court.

In response to the Court’s homosexual marriage decision, Sen. Ted Cruz has introduced legislation stripping the Supreme Court of jurisdiction over marriage. Horowitz advocates similar measures to strip the court of its ability to overturn federal immigration enforcement laws.

Under such legislation, immigration-related cases could still be heard by state courts, but at least state court judges are answerable to the voters.

A second, possibly politically easier, way of constraining the federal judiciary: require the Supreme Court to garner a supermajority in support of any opinion that strikes down legislation as unconstitutional.

This need not be done once and for all, but can be required in relation to individual pieces of legislation. For example, Horowitz says

If Congress passes a law to remove illegal aliens from the census or deny their American-born children citizenship… they can attach a provision defining the quorum needed by the courts to invalidate the law.

Such a provision could even require unanimity, though Horowitz suggests a seven-vote majority would be effective in most cases.

This is not a new idea. One constitutional scholar identified over sixty congressional proposals between 1823 and 1981 that have sought to impose a supermajority requirement. North Dakota and Nebraska already impose such a requirement on their state supreme courts. It would also be possible to strip jurisdiction from, or require supermajorities in, lower courts.

Jurisdiction could also be limited geographically. Some conservatives have suggested shrinking the jurisdiction of the ninth circuit—the single worst offender—to a small part of California, thereby freeing eight entire states from its tyrannical control.

Daniel Horowitz’s book went to press last year, before Donald Trump had secured even the Republican nomination. Its message has, however, been given greater urgency by recent judicial decrees blocking implementation of President Trump’s executive orders.

A decisive showdown with the federal judiciary will probably be necessary before the president can even begin to govern the country effectively.

If President Trump is serious about wanting to “win,” Horowitz’s book is a good place to start.