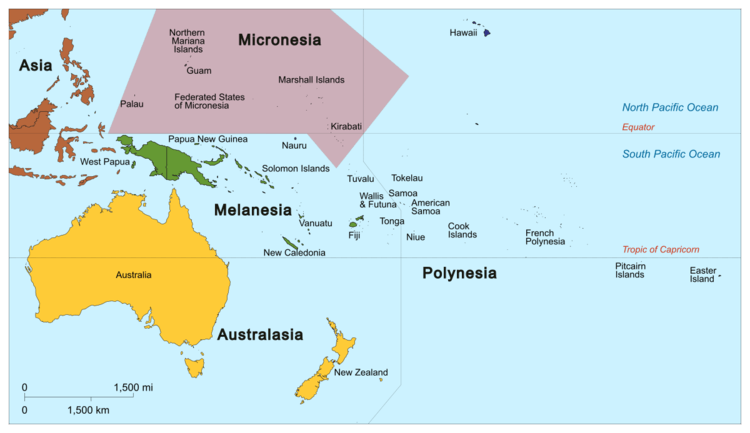 This is from Micronesians Abroad By Francis X. Hezel, SJ and Eugenia Samuel Micronesian Counselor #64 (December 2006) It gives a couple of explanations for the Micronesian colony effect. One is that colonies tend to grow up around wherever groups of foreign students go to college, an extreme case of chain migration. Another is that the new immigrants seem to have low-level jobs in factories and meat-packing plants, the same kind that could be done by unemployed Americans.

Tri-State Border Area in the Southern Midwest Our team intended to visit Kansas City, home of a growing Micronesian community, largely Pohnpeian, that sprang from students who attended Park College during the 1970s and 1980s. Small colleges, once well attended by Micronesian students, have frequently served as the seedbeds for migrant communities in the US, accounting in part for the seemingly odd locations of Micronesian strongholds. Kansas City is said to have been constituted a kousap by a Pohnpeian chief not long ago when he paid a visit to his compatriots who had settled in that city. [VDARE.COM note: Kousap seems to mean something like fiefdom—this is another example of symbolic reverse colonization. ] He was feted with sakau-the type made from powder rather than pounded-and left a week or two later with several thousand dollars, which had been collected as tribute from Pohnpeians who are now living 8,000 miles from their own island. Since we arrived the day before Pohnpeians were scheduled to celebrate the July Fourth holiday with baseball games in the southern part of Missouri, we drove off in the same direction everyone else was heading-to Neosho, Missouri, a town of about 10,000.

Neosho lies just a bit north of the Missouri-Arkansas border, no more than eighty miles from Springdale, Arkansas, the site of the large Tyson Chicken Factory and home to thousands of Marshallese immigrants. Another fifty miles west of Neosho, just across the state border, is Miami, Oklahoma, a town slightly larger than Neosho that has an island community of its own. We joined the 300 or so Micronesians to watch the baseball games and enjoy the mixed buffet, featuring island delicacies like banana pihlohlo along with such American standards as spareribs and chicken. Micronesians came from all over Missouri, some from northern Arkansas and Wichita, and even from as far away as Cincinnati and Corsicana, to attend. Most were Pohnpeians, but there were also a few Chuukese and Marshallese on hand. We were told that Cincinnati would, in turn, host the next Pohnpeian games, scheduled for September 11-a day celebrated on their home island as Liberation Day.

The person who organized the games-and who oversees most other activities that take place in Neosho-is a Pingelapese businessman by the name of Kernel Rehobson. [VDARE.COM note: The murder victim.]Kernel owns a retail store that is a gathering place for Micronesians from dozens of miles around since he stocks his store with the type of down-home items that are so difficult to find in the US: the large plastic combs that women wear in their hair, zoris, dawasi and brushes for showers, and island-style skirts with embroidered hems. Kernel says that he had his troubles when he first settled in Neosho; people mistook him for a Mexican and kept asking for his papers when he tried to enroll his kids in school or gain access to any social services.[VDARE.COM note: Good for them. And of course, he did have such papers, because he was a legal immigrant—you can't wade to the US from Micronesia.] He started out working for K-Mart as a warehouseman, worked his way up to manager, and later quit to begin his own business. Kernel also serves as pastor to the Pingelapese community in the church that they share with the Neosho Protestant congregation.

Anyone from the islands who needs help of any sort-a social security number, a driver's license, a job-always comes to Kernel first. Micronesians from Neosho and its environs depend heavily on two large factories for employment-La-Z-Boy, which makes chairs, and Twin Rivers Chicken, a factory similar to the well-known Tyson's plant in nearby Springdale-with an estimated 70 or 80 Pohnpeians working at each place. The rest of the Micronesian community in the area work in fast-food places, or as cashiers, drivers or stockboys at Wal-Mart

By the way, if you're wondering what "Pingelapese" means, it means from the island of Pingelap.