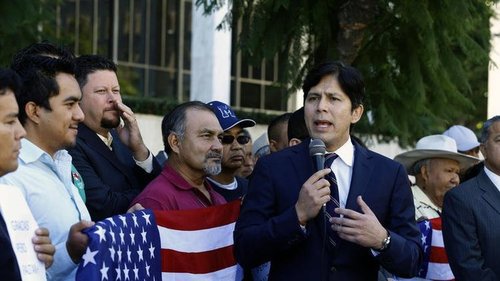 A Reader Reports The LA TIMES Is Supporting Rotten Boroughs

Above, Latino politician Kevin De Leon addresses supporters who may not be eligible to vote.

The LA Times 's Cathleen Decker is a reporter at the LA Times who is hysterical that the rule of law may prevail in California for a change. I am sure she would agree that if someone invades her house, he should be counted as a resident.

Notice that she offers no reasons for the side of the argument she obviously opposes. The LA Times is a repulsive leftwing propaganda rag.

The U.S. Supreme Court’s unexpected decision to take up a Texas voting case poses perhaps the most acute threat in a generation to Latino political strength in California. But how much of the threat actually materializes is decidedly less known.

In a situation rife with questions, one of the most ironic is this: Have Latino politicians, whose success was helped along by supportive court actions decades ago, become so ubiquitous that they can succeed regardless of new court decisions that might otherwise lessen their strength?

The Texas case was brought by plaintiffs who want only citizens to be counted in the crafting of voting districts; currently, all residents are counted, which boosts the number of districts in places like Southern California. Were the plaintiffs to succeed, many urban districts would not retain enough viable constituents to exist on their own. The court’s decision, which covers state and local elections but could be expanded to include congressional districts, will not be announced until early next year.

Once aided by courts, can Latino politicians survive Supreme Court act?, By Cathleen Decker , May 27, 2015

James Fulford writes: I described the situation in Los Angeles in an article years ago, quoting Fred Siegel’s 1997 book The Future Once Happened Here, p. 147

Most Latino pols in L.A. are classic ethnic operatives – with a twist.  What's different is most represent “rotten boroughs,” districts where, because of recent immigration and the youth of the average Latino, the percentage of voters in the total population is tiny.

This means that the real voting base is that small fraction of the population already eligible to vote and sometimes directly dependent on government employment programs.

This not only increases power to Latino pols, it affects who represents Americans in the Congress–see my  Obama, Immigration’s Rotten Borough Effect, And The Small White States, June 6, 2014.