Trump Is Right to Say Illegal Aliens Are Voting 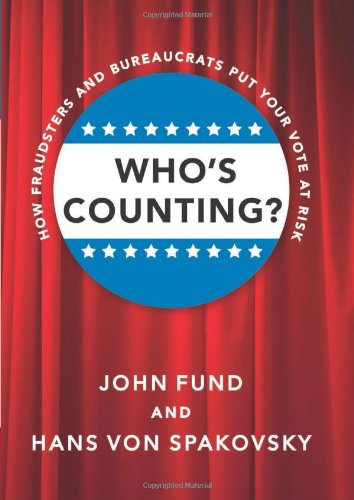 It’s obvious Green Party candidate Jill Stein is running a scam when she complains about voter machine hacking by the Russians, which is impossible on a widespread basis, while she doesn’t care about illegal alien voting, which could in fact be quite large.

Hans van Spakovsky co-wrote a book about vote fraud, ”Who’s counting? How fraudsters and bureaucrats put your vote at risk” and he recently explained details of the issue on Fox News.

Van Spakovsky mentioned the necessity to institute voter ID because US voting is based upon an honor system and that is not satisfactory. The public continues to support voter ID as a common sense requirement even though liberals complain that it is racist and black people couldn’t possibly manage to have proper identification. A Gallup poll from August found that 80 percent of Americans support voter ID laws.

PAUL GIGOT: A vote recount got underway in Wisconsin Thursday, part of a push initiated by Green Party candidate Jill Stein that includes Michigan and Pennsylvania as well it claims of voting irregularities in these battleground states. President-elect Donald Trump took to Twitter to blast the recount effort as a scam while alleging serious voter fraud in Virginia New Hampshire and California tweeting last Sunday quote “In addition to winning the electoral college in a landslide, I won the popular vote if you deduct the millions of people who voted illegally.”

Hans von Spakovsky is a former member of the Federal Election Commission and a senior legal fellow at the Heritage Foundation. He is also co-author of the book “Who’s counting? How fraudsters and bureaucrats put your vote at risk.” So welcome to the program. Let’s start with the recount: is there any evidence of enough voter fraud in these states to overturn the election outcome?

HANS VAN SPAKOVSKY: Well remember, Jill Stein is not claiming voter fraud; she’s claiming hacking of the voting machines. She has absolutely no evidence of any kind to do that and in fact the way that those machines work, they are not tied into a central computer system, they are not networked, that is, the machines for example that scan ballots. So that the ability of hackers to get into is just about nil. This is a complete and total waste of time by Jill Stein.

GIGOT: Just to just to take her suggestion of a hacking seriously for a second, what would a hacker have to do in our decentralized electoral system to be able to influence the outcome of the result? How would they have penetrated so many different sites?

VAN SPAKOVSKY: They could for example — most electronic voting machines again — they’re not networked, so you’d have to get physical access to each electronic voting machine. Similarly in precincts that use paper ballots, the kind that are optically scanned by a computer, you’s have to get somehow physical access to the computer scanner and that is almost impossible. So the chances of this being hacked, it’s just about nil.

GIGOT: Okay, so just in a normal recount, have you ever seen a recount that overturned more than 10,000 votes in any kind of election?

VAN SPAKOVSKY: No, look, in the last two decades there have been a little more than two dozen statewide recounts; only in three of those was the race overturned. One of those was the Coleman-Franken race in 2008 in Minnesota. In every single case the margin of victory was less than a thousand votes. You simply are not going to get a bigger movement than that, even in a statewide recount,

GIGOT: Let’s talk about Donald Trump’s claims of fraud in the election, what do you make of his claim that they were they were up to millions of fraudulent voters?

VAN SPAKOVSKY: I would say he’s more right than his critics. We’d actually don’t know the answer to that, and the problem is is that our whole voter registration process is pretty much based on an honor system. I will tell you, we know for certain that non-citizens are illegally registering and voting. There have been cases all across the country and people being prosecuted for that, but there’s no systematic way of verifying citizenship. A number of surveys have looked at this, and non-US citizens themselves admit that they are registered to vote. It could be anywhere from 10 to 15 percent of non-citizens being registered.

GIGOT: If you’re an illegal immigrant here, you can go out and get a fake ID, fake social security card, fake driver’s license and then walk in and register to vote. Even with those fake documents, nobody’s going to check those, as you say it’s the honor system. So that’s the basis for the ability of people to register even if they’re not citizens, correct?

VAN SPAKOVSKY: Yes but also non-citizens who are here legally, many of them go and get driver’s licenses and they are asked whether they want to register to vote, and they’re allowed to register to vote. A case in Virginia just before the election — more than a thousand non-citizens were found registered in just eight counties in the state, all of them here legally but illegally registered, and many of them had voted in prior elections.

GIGOT: Okay but there’s a question of magnitude here. Do we have any sense of what that magnitude is? I mean you mention anecdotes, and anecdotes are worth mentioning, but statistically we really don’t know how many people might be fraudulent voters, do we?

GIGOT: What should states do to limit this kind of voter fraud?

VAN SPAKOVSKY: Every state should have a law like Kansas that says when you register to vote you have to provide proof of citizenship and frankly the Trump administration needs to start a new project whereby the Department of Homeland Security starts checking state voter registration lists to verify citizenship of people who are registered to vote.

GIGOT: But this is typically done on a state basis, this is not something that you would do nationally in terms of voter ID laws.

GIGOT: Okay, Hans von Spakovsky, thanks for being with us.