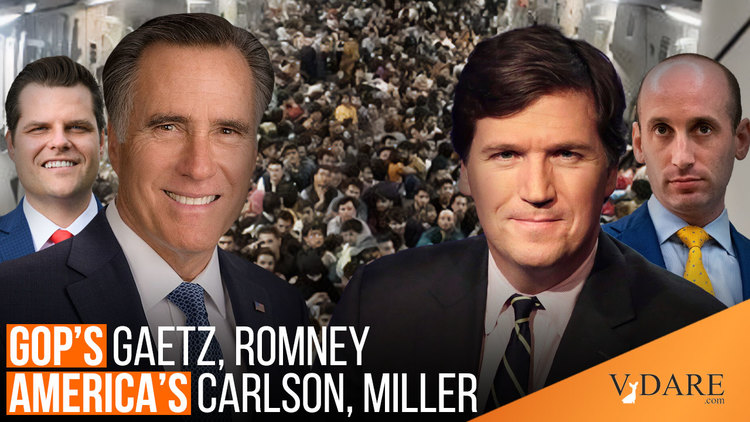 The Afghan War is over—and we lost. We gave trillions of dollars and thousands of American lives in the conflict, and all we’re getting back is a deluge of Afghan “refugees.” These are the people who lost their country to the Taliban and are completely alien to the Historic American Nation. Yet, the political Establishment wants them all to come here. It’s the consensus now on Capitol Hill among both Democrats and Republicans. A few brave voices oppose it—but not enough, if America (to say nothing of the GOP/GAP) is to survive

The refugees are already starting to come here and to other countries throughout the West. Both Canada and the UK have promised to take in 20,000. The number for the U.S.is still being determined. The Pentagon plans to resettle at least 22,000 Afghans with the Special Immigrant Visa. Two thousand have been flown to the U.S. since July. Prior to the collapse of the Afghan government, there was discussion of taking in anywhere from 20,000 to 100,000 Afghans.

Interestingly, President Biden is surprisingly reluctant to take in a massive amount of refugees. According to Reuters, he fears there will be political blowback and would prefer they be resettled in other countries [Biden's vow to airlift Afghan allies meets ticking clock, risky rescue, by Idrees Ali et al., Reuters, August 17, 2021].

But sources tell the Watcher that transferring the refugees to other countries is not likely to happen. Muslim countries such as Kuwait don’t want them. Instead, sources say that the plan is to get to the point where thousands of migrants can be processed per day. The White House realizes this is a bad idea politically, but it’s powerless to resist the demands of its Leftist base and the media.

In a massive irony, however, Biden’s prudence is not shared by many Republican elected officials.  Instead of making a principled stand against unvetted refugees, they’re exploiting the moment for silly debating points. In effect, they’re becoming neocons again.

Many of the arguments they’re using are no different from the Open Borders crowd. Thus one of the new heroes to conservative fans of Afghan resettlement is former CIA analyst Matt Zeller. He became a hit with conservatives after he attacked Biden over the withdrawal on MSNBC. He has since become one of the leading voices for letting in tens of thousands of Afghans. In this viral clip, he said we need to take in at least 86,000 Afghan “allies” [CIA analyst bashes MSNBC for supporting Biden's Afghanistan speech, by Lindsay Kornick, Fox News, August 17, 2021]. He even told CNN, incredibly, that former Trump adviser Stephen Miller should be charged with war crimes for opposing refugee resettlement [Afghanistan War vet says Stephen Miller is 'complicit' in the deaths of Afghan interpreters, by Grace Panetta, Insider, August 18, 2021].

Most Republicans and conservative publicists who support the migrant flood don’t go as far as Zeller in calling for legal sanctions against dissidents, but they do offer similarly asinine arguments.

Thus cuckservative Never Trumper Erick Erickson said that the Bible calls on us to take in legions of refugees and to refuse that leads to civilizational decline.

In scripture, one of the signs of a fallen land is its rejection of refugees. People who say we are in Romans 1 territory who also say we shouldn’t take in real refugees are complicit in getting us to Romans 1 territory.

Seeing America’s decline in the wake of mass immigration should disabuse anyone of such notions.

Other Republicans used similar appeals to the divine. Mitt Romney issued a statement saying he “struggled to hold sobs” over how America has abandoned God’s children in Afghanistan.

Others simply said we owe some sort of debt to the Afghans. Michigan Rep. Peter Meijer claims the Afghans we’re set to welcome risked their lives to aid Americans and that they believe in this nation. The implication is that they will be better Americans than us.

This is a photo of a plane load of Afghan allies who risked their lives to help protect American troops. Who braved assassination threats by the Taliban because they believed in America and trusted us to look out for their safety. I would be honored to welcome them.

We are DUTY bound to get every American citizen out of Afghanistan.

We are HONOR bound to get those Afghans who bravely fought by our side out.

Some Republicans are doing more than just striking poses At least six Republican governors say they want to resettle Afghans in their states:

Georgia Gov. Brian Kemp, who governs a state turning blue via immigration-driven demographic change, says it’s “vitally important to keep those who partnered with American armed forces over the last 20 years safe from harm." Utah Gov. Spencer Cox said we “must stand by America’s allies” and wants to welcome thousands of refugees to his state, partly, he said in a letter to Joe Biden, because Utah was “settled by refugees fleeing religious persecution” (i.e., white Mormons) 170 years ago.

These six governors are embracing the demographic threat to the Historic American Nation all for the sake of “compassion” and scoring cheap political points against Joe Biden [These Republican Governors Want to Take in Afghan Refugees Fleeing Taliban, by Darragh Roche, Newsweek, August 18, 2021].

Several Republican senators urge Biden to “damn the red tape” and set no limit on the number of Afghans admitted. Thus three Republican senators (Lisa Murkowski, Bill Cassidy, and Jim Inhofe) signed a letter with 46 Democrats that called on Biden to give the refugees “humanitarian paroles,” so that there would be no cap on the number of admissions. Other Republicans, such as Ben Sasse and Mitt Romney, demand the president slice through the bureaucracy to take in as many Afghans as possible. Dozens of House Republicans issued a letter that demanded Biden prioritize the resettlement of Afghans in America [Lawmakers In Both Parties Call To Axe Hurdles For Trapped Afghan Refugees, by Andrew Sollender, Forbes, August 17, 2021].

Last month, the vast majority of Republicans voted for a bill to expand the number of Special Immigrant visas awarded to Afghans. Only 16 House Republicans voted against this measure, and it appears it will sail through the Senate.

Otherwise solid Republicans such as Matt Gaetz voted for the bill. The Florida congressman said he supported this bill because these “allies” saved his constituents’ lives (Gaetz’ district includes a military base). Vets groups are one of the most active forces pushing this idea right now, with all of them claiming tens of thousands of Afghans love America and saved American lives.

Even Donald Trump seemed to endorse Afghan refugee resettlement. In his first statement on the issue, he criticized Biden for failing to evacuate our “allies.” He appeared to change that with subsequent statements, arguing that no Afghan should be evacuated until every American citizen is flown out. It’s not the most inspiring message for Americans who desperately need a patriot leader right now [Afghan refugee debate fractures GOP, by Marc Caputo, Politico, August 18, 2021].

Indeed, most of the opposition to Afghan refugee resettlement comes from non-lawmakers. Stephen Miller, Tucker Carlson, and Michelle Malkin are arguably the strongest patriot voices.

Miller argued we cannot vet these migrants as the whole apparatus to do so collapsed with the onslaught of the Taliban. He told Laura Ingraham:

Resettling in America is not about solving a humanitarian crisis, it's about accomplishing an ideological objective to change America and if we really want to help people in the region, we'll be working with our partners to find a safe place for people to go…but that's not America.

[Stephen Miller: Those Arguing For Afghan Resettlement In U.S. Are Doing It For Political, Not Humanitarian Reasons, by Ian Schwartz, RealClearPolitics, August 18, 2021

Tucker has dedicated segments throughout this week to denounce Afghan resettlement.

He points out that they’ve brought a lot of crime wherever they settle in Europe and they share little in common with average Americans.

This is unquestionably true. Afghanistan is a primitive society where the average IQ is 84. Many Afghans, including our noble allies, engage in a host of practices we would find despicable. American soldiers were ordered to ignore Afghan officers engaging in child rape [Afghan Pedophiles Get Free Pass From U.S. Military, Report Says, by Rod Nordland, New York Times, January 23, 2018]. This practice was so common among our allies that the Taliban used child sex slaves as a way to catch and kill officials of the last regime [Taliban use boy sex slaves to assassinate lusty officials, by Simon Tomlinson, Daily Mail, June 16, 2016]. Many of these allies also stole billions of dollars from their people and were involved in the drug trade [How the heroin trade explains the US-UK failure in Afghanistan, by Alfred McCoy, The Guardian, January 9, 2018]. The Politically Incorrect fact is that the vast majority of Afghans also support the stoning of adulterers and Sharia Law. But our pundits and politicians promise us that they can become true Americans.

The current situation is completely different from the massive pushback against Syrian refugees in 2015. Afghans are much like Syrians. They’re Muslims who come from a hotbed of terrorism, have nothing in common with Americans, and there was no real way to vet them. These were all arguments Republicans made against Syrian resettlement. Pretty much every Republican governor opposed taking them in. Now, these arguments are ignored in favor of selective readings of the Bible and delusions that these are great Americans in waiting.

The most shocking thing of all is that Biden now appears more sensible than the majority of the Republican Party. He knows there’s a border crisis that his administration can’t contain. He knows that America doesn’t have the resources to house the refugees and illegals we’ve already committed to. He knows that his party is being killed over the immigration issue. That’s why he frets over the consequences of being responsible for a massive influx of Afghans into Middle America.

We have countless examples of the ruin brought by refugees to American communities. Just look at the example of Somalis. They’ve wrecked Lewiston ME and Minneapolis MN. Their chief contributions are crime and being a burden on taxpayers. And when they grow up, they don’t become patriotic Americans. Turning Point USA chief Charlie Kirk (of all people) nailed it when he said: “Biden wants a couple hundred thousand more Ilhan Omars to come into America to change the body politic permanently.”

That’s the whole purpose of Afghan resettlement. Not to defend American “honor,” not to uphold Biblical principles, and not to fortify America’s position in the world. It’s to fundamentally change the nation and dispossess the founding stock.

If even Charlie Kirk can understand this, the rest of the party should follow suit and stand for America First.