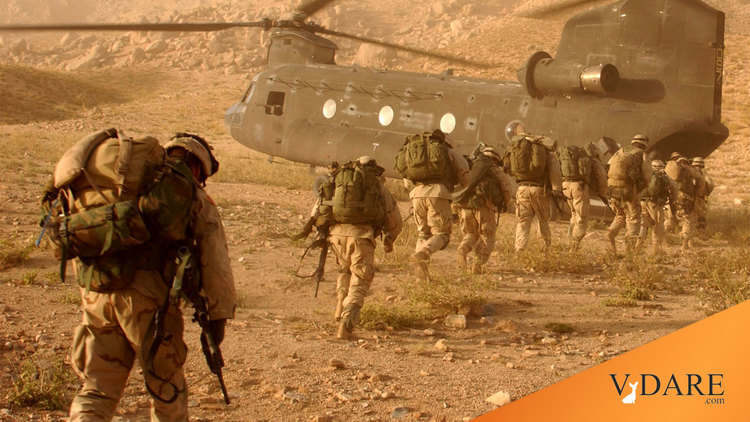 The trillion-dollar project to plant Western democracy in a Muslim nation historically fabled for driving out imperial intruders has crashed and burned after 20 years, and the Taliban are suddenly back in power.

After investing scores of billions in training and arming a force of 350,000 Afghani troops, the U.S. could not stand up an army and a government that could survive our departure.

And the final U.S. departure from Hamid Karzai International Airport may become, like JFK's Bay of Pigs, a synonym for American debacle.

Nor is the failure ours alone. Many of our principal allies were heavily invested. The British are now attempting to bring their people out of Kabul under the same conditions as ours.

The leader of Chancellor Angela Merkel's party and possibly the next chancellor of Germany, Armin Laschet, calls the withdrawal "the biggest debacle that NATO has suffered since its founding."

Three decades ago, after the breakup of the USSR and the end of the Cold War, Republican Sen. Richard Lugar said that NATO, having lost the rationale for its existence—containment of the Soviet Union—would now have "to go out of area or go out of business."

Cynics might say that, in Afghanistan, NATO did both.

After 9/11, "the most successful alliance in history" invoked Article 5 and backed the U.S. war to oust the Taliban and annihilate the Al Qaeda terrorists who had carried out 9/11. Many sent troops.

But there could be worse to come.

While there are about 4,000 U.S. troops at the Kabul airport, U.S. control does not extend beyond the airport perimeter.

When asked if U.S. troops could enter Kabul and extract American citizens, Defense Secretary Lloyd Austin replied, "I don't have the capability to go out and extend operations currently into Kabul." Americans in Kabul and other cities must make their own way to the Kabul airport.

The U.S. thus depends today upon the sufferance of the Taliban to let the Americans through the gridlocked highway. Many Afghan allies are being impeded and turned back. Having aided our troops during the war, these Afghan allies face murderous reprisals and retribution.

There are other present perils.

A few mortar shells landing on the tarmac of the lone runway at HKIA, and no plane can fly in or out until the runway is repaired. The arrival of troops and supplies, and any daily departure of 5,000 to 9,000 people, would be halted.

If fighting is renewed, the Americans left in Kabul and other cities become hostages to the Taliban. And there are many more out there than the 52 Americans held by Iran in the hostage crisis that ended the presidency of Jimmy Carter.

The U.S. does, however, retain leverage. U.S. airpower can still do damage to the Taliban, and the U.S. can veto any International Monetary Fund money and cut the Taliban's access to Afghanistan's financial reserves in U.S. banks.

Without cash, the Taliban will have a hellish time providing for the necessities the country needs to stay viable.

Thus, the Taliban are putting on a moderate face at the top level.

Yet, given the character of the Taliban, as revealed in its previous tenure, and the desire for revenge against those who have been killing Taliban comrades, the future looks grim for those left behind.

When Saigon fell in 1975, its armed forces went into re-education camps—concentration camps. Hundreds of thousands of civilians fled on rafts, many to their deaths in the South China Sea. The Cambodians who backed us underwent a genocide, with a fraction of the entire population annihilated by the Khmer Rouge of Pol Pot.

As for the damage done to Joe Biden's presidency, it is significant and permanent. The collapse of the regime, and the botched withdrawal of U.S. troops, U.S. citizens and Afghan friends and allies, have tarnished any reputation for competence Biden had.

As for Chairman of the Joint Chiefs Gen. Mark Milley and Austin, it is hard to see either surviving long in their positions after learning they did not see coming the imminent and worst foreign policy debacle since the fall of Saigon.

Did the U.S. intelligence agencies see it coming? Did they fail to inform the Pentagon or White House?

After the Bay of Pigs in April 1961, former CIA Director Allen Dulles, who had a role in the failed invasion, was, after a decent interval of six months, cashiered.

One imagines that senior Biden officials' heads will roll well before that date in the Biden administration. For in this disaster, it seems, no one saw it coming so soon, or becoming so sweeping.