OF COURSE Harvard Discriminates Against Asians. But Maybe That’s Good For Americans? 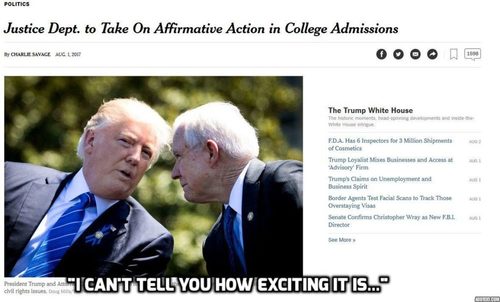 There hasn't been a whole lot of news about the Department of Justice investigation of Harvard University since I last mentioned the issue back in August.

To refresh your memory: the DOJ was responding to a complaint from a coalition of Asian-American groups that their people, Asian-Americans, are discriminated against by Harvard admissions officers.

Back then in August, the DOJ was just staffing up for an investigation. It seems that now they're getting ahead with it. So at least I infer from this column by Betsy McCaughey [Email her] in Wednesday's New York Post: Ending Ivy-League Bigotry . [November 28, 2017]

According to Betsy, Jeff Sessions' DOJ has advanced to the point of demanding admissions records from Harvard.

Harvard, she says, is stonewalling like crazy. They haven't delivered a single document. DOJ imposed a deadline of December 1st —which Harvard has apparently just (grudgingly) accepted (it’s trying to add a condition that “allowed government lawyers to look at the records only in the offices of Harvard’s lawyers, according to people close to the case”. [Harvard Agrees to Turn Over Records Amid Discrimination Inquiry,  By Anemona Hartocollis, NYT, December 1, 2017] 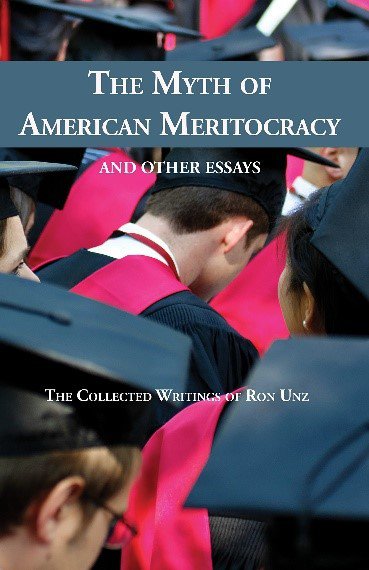 This is nothing new. Harvard got sued in 2014 by a mainly Asian-American group on the same grounds—that Harvard runs a quota system on admissions to keep the numbers of Asians down. It has been stonewalling on that, Betsy reports:

Harvard has spent millions of dollars on legal maneuvers and court filings, trying unsuccessfully to get the lawsuit dismissed and to shield the college's "holistic" admissions process from scrutiny. But a federal judge is compelling the college to hand over six years of admissions records … This lawsuit is expected to be tried in Boston late in 2018, but no doubt will end up at the US Supreme Court.

The first thing to be said about this is that of course Harvard does discriminate against Asian-Americans. Ron Unz crunched the numbers just five years ago over at The American Conservative in a brilliant piece titled "The Myth of American Meritocracy" [November 28, 2012] You can also find the essay in Ron's book of that title.

The centerpiece of Ron's essay: a killer graph comparing the steady rise from 1990 to 2011 of the Asian-American college-age population with the dead-flat proportions of Asian-American admittances to Ivy League schools, held down firmly in a tight band between thirteen and eighteen percent. 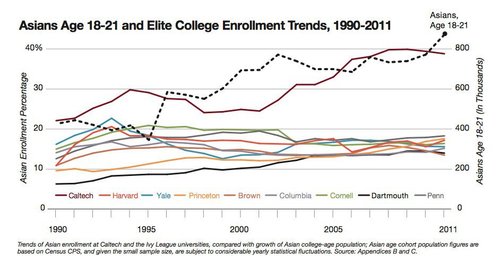 Of course they are discriminating. Who doesn't know it?

Betsy McCaughey is upbeat about the situation. Here's her closing paragraph:

Harvard's racial-quota system is indefensible. Fortunately, its days are numbered, because finally we have a Justice Department willing to fight for colorblind fairness in college admissions.

Needless to say, I'm going to take a much darker view. East Asians have higher mean IQ than whites, and of course far higher than mestizos and blacks. They especially excel at disciplines needing visuo-spatial skills. IQ aside, it seems likely they also have higher proportions of the personality characteristics that suit a person to high intellectual endeavor.

Asian-American students now win nearly half the places at California Institute of Technology, up from only a quarter in 1992.

Okay, Betsy, but here's my question: Is this actually good for America?

Think of the kind of resentment, anger, and bitterness that blacks feel when they see other races succeeding more than they do. Wouldn't color-blind admissions just add a new layer of resentment in American society—with whites (known as “Americans” until the 1965 Immigration Act) watching Asians flood into the Ivies, displacing them?

Immigration patriots in the early 20th century strove to keep out East Asian immigrants, not because they "hated" them, as the infantile language of our current discourse would tell you, or because they thought them an inferior race, but because they feared mass immigration of East Asians would produce an overclass, generating discontent and resentment among legacy Americans.

As Kevin Macdonald wrote here at VDARE.com in 2004:

Many restrictionists, far from feeling they were members of a superior ethnic group, worried that their people could not compete with Japanese and Chinese.

I think that worry was reasonable. What would Betsy McCaughey say if I confronted her with it?

I'm sure she would respond with a stream of race-denialist blather. "There are no innate differences between the races," she'd protest. "That's a horrible thing to suggest! We just need the right social policies. Fix the schools! Save the black family! …"

We've heard it all a thousand times. Race denialism is state dogma in the 21st-century West. No one with a gig writing op-eds for the New York Post is going to turn race-realist.

Unfortunately, race-realism is true and race-denialism is a lie. That being the case, we have to choose between two evils: unfairness in college admissions, or higher levels of social discord.

To date we have chosen Door Number One. Are we quite sure that wasn't the better choice—the lesser of two evils?

If you go to a doctor with a bacterial infection—an infected blister perhaps—he can give you an antibiotic, and you'll be cured. If you go to him with a broken leg, he'll get it set for you, and soon you'll be playing tennis again. Doctors can fix things and cure things.

If, however, you go to the doctor with arthritis, or diabetes, or a leukemia like the one I have, he can't fix it, he can't cure it. What he can do is manage it: set you up so that the pain and inconvenience are the least possible. We can't cure those conditions, but we can manage them, minimizing the trouble they cause us.

America's race problem is like that. There's no cure, although the race denialists breezily assure us there is. We can't fix the schools to produce equal racial outcomes. God knows, we've been trying for decades, with essentially zero results. We can't make whites as smart as East Asians; Mother Nature's standing in the way.

What we can do—what we do do—is manage the situation, to keep social discord at a minimum. Race quotas in college admissions is one aspect of that management. It works pretty well.

As I said back in August, though:

This is one of the holes we have dug for ourselves this past half century with mass immigration and multiculturalism.

Do I know how to get out of the hole? No.

I do know, though, that if we adopt Derbian Minimalism as our immigration policy with 1) no further settlement of foreigners from anywhere and 2) severe restrictions on numbers of foreign students, we might at least stabilize the situation.

There: I just said it again. We've foolishly, heedlessly made a mess for ourselves with these decades of mass immigration.

Now there are two things we have to do: