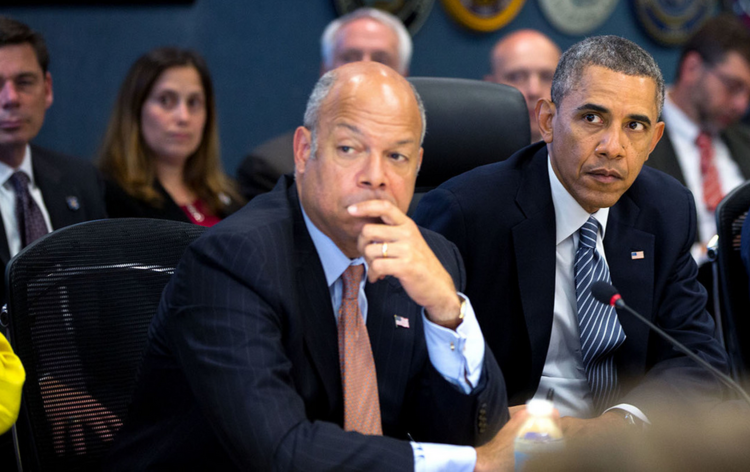 The Obama Regime’s Administrative Amnesty isn’t just about importing undocumented Democrats—it’s about deliberately destroying morale at the Department of Homeland Security. An agency can survive incompetent leadership or budget shortfalls if its people believe in what they are doing. But an agency stripped of a mission becomes a bureaucracy with no purpose but to perpetuate itself, filled with employees looking forward only to their own retirement.

That is precisely what has happened to our Department of Homeland Security. In fact, the DHS is now the worst place to work in the entire federal government:

As Department of Homeland Security (DHS) Secretary Jeh Johnson grapples with numerous threats facing the US, including implementing enhanced screening measures to curb the spread of Ebola and fears of lone-wolf terrorist attacks, DHS continues to suffer from debilitating morale problems — a problem that's been stewing for years.

Employee satisfaction at DHS plummeted to a historic low this year, with the department falling dead last in the annual Best Places to Work in the Federal Government rankings.

The survey, conducted by the Partnership of Public Service, found DHS in last place for the third consecutive year. Rep. Michael McCaul (R-Texas), chairman of the House Committee on Homeland Security, called the ranking “unacceptable.”

“It is entirely unacceptable that DHS ranks lowest on the list of large federal agencies on the 2014 Best Places to Work survey,” McCaul said. “This once again underscores the concerning challenges the department and its components continue to face with morale.” [Links added]

Secretary Jeh Johnson has claimed that he and the DHS leadership have been working to improve morale:

“Since Secretary Jeh Johnson and Deputy Secretary Alejandro Mayorkas assumed office this past year, they have been committed to making our workforce’s professional fulfillment one of their highest priorities,” [Catherine] Emerson [DHS chief human capital officer, whatever that means] said. “A great deal of work is ongoing and there is much more to be done.”

But these efforts have had the opposite effect.

Coincidence? As failed leaders always do, Johnson and his cronies are trying to find a scapegoat to detract from their own incompetence. In this case, Johnson and other Democrats are claiming that the real problem is “numerous senior vacancies” that need to be filled.

But the problem isn’t the “vacancies”—it’s the people who are there now. Besides Johnson, there’s Deputy Secretary Alejandro Mayorkas, a Berkeley grad who was director of United States Citizenship and Immigration Services during Obama’s first term. Citizenship and Immigration Services is a component of Department of Homeland Security. Mayorkas became Deputy Secretary of DHS in 2013. He can hardly say he is surprised by low morale in the agency he’s served as a senior official throughout Obama’s entire Administration. Yet it’s Mayorkas, along with Secretary Johnson, who created a “steering committee” to solve the mystery of why DHS employees are unhappy.

In fact, of course, there is no mystery. The Obama Administration is preventing DHS employees, especially those in immigration law enforcement, from doing their job. Not surprisingly, employees are unhappy that their existence has been rendered meaningless.

The most important of the DHS components involved in interior immigration law enforcement: Immigration and Customs Enforcement, better known as ICE. ICE itself has two major components, Homeland Security Investigations and ICE Enforcement and Removal Operations. The Obama Regime has essentially prohibited both of them from enforcing immigration law.

The other ICE component: ICE Enforcement and Removal Operations (ICE ERO), which is charged with finding and removing illegal aliens. ERO is responsible for far more arrests of illegal aliens in the United States than Homeland Security Investigations.

Yet the dramatic decline in deportations parallels the collapse of morale within ICE. Interior enforcement by ICE has declined from a high of 236,000 deportations in Fiscal Year 2009 to 100,000 deportations in Fiscal Year 2014. And almost a million illegals who have received a final order of removal remain within the United States without suffering any consequences. [ICE Enforcement Collapses Further in 2014, by Jessica Vaughan, Center for Immigration Studies, October 2014]

Not surprisingly, surveys show the morale began its decline in 2010, right when Obama’s various Administrative Amnesties began to bite. ICE is now seen as an agency in decline by all employees, regardless of their ethnicity, gender, or age. [Immigration and Customs Enforcement Agency Report, Partnership for Public Service, 2014 Report] The decline in enforcement activity directly mirrors the decline in ICE morale over those years.

This is a feature, not a bug. Like the old FedEx commercial making fun of the post office, Barack Obama is trying to turn DHS into a bureaucracy of time servers where employees sit around doing nothing.

My observations of and conversations with DHS employees show that’s precisely what is happening. But it isn’t the fault of the workers. Under Obama’s destruction by design, wasting time and money is the only thing the Department of Homeland Security is even allowed to do.