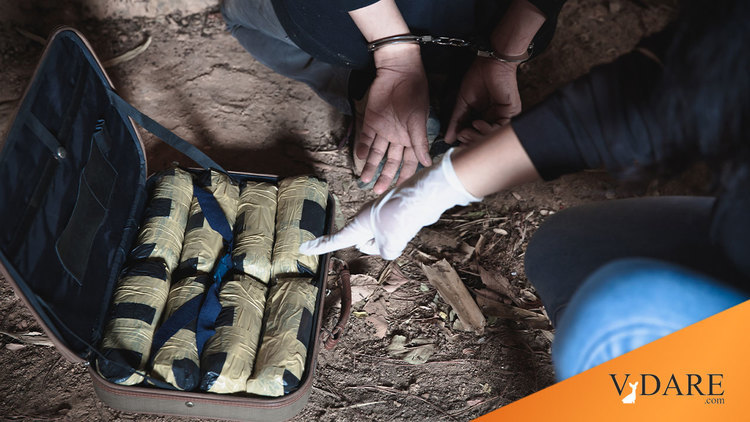 Drug Smugglers As American As Apple Pie? More Like As Mexican As Tequila

Are drug smugglers as American as apple pie? Not quite, but as Mexican as tacos. Comrade Spencer Ackerman's Danger Room blog at Wired recently posted that drug smugglers on the border with Mexico are 80% American, and with the apple pie comment implying that white people are the primary drug threat to America. Never mind that drug gangs are predominantly black and Hispanic in the United States, and  overwhelmingly Hispanic in the border counties with Mexico.

Mexico’s drug cartels depend on smugglers to move their illicit wares. But to listen to the U.S. Border Patrol, you’d get the impression that most of the smugglers are Mexicans. In fact, most are born-in-the-USA Americans, as the cartels prefer that their mules look like Walter White. And the Border Patrol knows it.

According to the Center for Investigative Reporting (CIR), U.S. citizens comprise the overwhelming amount of drug-related arrests in recent years by the Border Patrol. They’re about 80 percent of the total, according to arrest data acquired by the group.

Authors Andrew Becker, George Schultz and Tia Ghose don’t dispute that Mexican drug cartels are in control of the drug smuggling trade. “But the public message that the Border Patrol has trumpeted for much of the last decade, mainly through press releases about its seizures, has emphasized Mexican drug couriers, or mules, as those largely responsible for transporting drugs,” they write.

And besides Border Patrol, Customs and Border Protection's Office of Field Operations also claims that most smugglers are Mexican citizens.

This impression was reinforced by Customs and Border Protection spokesman William Brooks, who told the CIR that the “majority of people involved in smuggling drugs are citizens of Mexico.” Thirty-eight percent of the time, press releases from the agency announcing an arrest notes a Mexican nationality, according to the authors. When it’s a U.S. citizen, the number drops to 30 percent.

But we have to go to the original study that Beckhusen refers to in order to get the truth.

The public’s view of a typical Mexican drug smuggler might not include U.S. Naval Academy grad Todd Britton-Harr, who was caught at a Border Patrol checkpoint in south Texas in December 2010 hauling a trailer with 1,100 pounds of marijuana.

Nor would someone like Laura Lynn Farris leap to mind. Border Patrol agents stopped the 52-year-old woman at a border checkpoint 15 miles south of the west Texas town of Alpine in February 2011 with 162 pounds of marijuana hidden under dirty blankets in laundry baskets...

Three out of four people found with drugs by the border agency are U.S. citizens, the data show. Looked at another way, when the immigration status is known, 4 out of 5 busts – which may include multiple people – involve a U.S. citizen.

So, there is the issue. Of all arrests by the Border Patrol at checkpoints, which are well into the interior of the United States, at least one of any group of people arrested, are Americans. "Involved" is a far cry from 80% of smugglers are American. A whole world away. And some tortured language as well as tortured statistics.

Then the qualification, "involve a U.S. citizen." That means that if you count the arrest of 10 people in a single investigation, such as ten people in a big rig carrying drugs and illegal aliens in the trailer and, for instance, say the driver is American, and the remaining 9 are Mexican illegals who carried the drugs over the border and are hiding out in the back of the big rig, then that arrest "involves" a U.S. citizen. However, the actual smugglers were the Mexican illegals in the back of the big rig with the drugs as, and will compose 90% of those arrested.

Alien and drug smuggling go together. And you aren't going to get an American to carry a 50 pound pack of marijuana over the border. And only slightly more likely to run a car with concealed drug compartments through a Port-of-Entry. Which is not unusual, to pass through a Border Patrol interior checkpoint one must present or make an oral declaration of citizenship, or present immigration documents. This encourages the cartels to recruit Americans for this leg of the drugs journey. But this is, again, not smuggling. The smuggling is done when the drugs cross the border. Watch an episode of Border Wars to see if you can find a white person brings drugs across the border. It just ain't happening in the numbers compared to Mexican citizens.

And CBP is correct. The overwhelming number of person arrested by the Border Patrol and CBP Office of Field Operations, are Mexican. Successfully smuggled drugs are then dropped at stash houses, then distributed, and can quite frequently be transported by American citizens.

However, in their rush to Americanize, or just blame whitey first, both Danger Room and CIR seek to put a white face on drug smuggling in order to normalize it and deflect blame from Mexicans who actually bring the drugs over the border. This is part of the ongoing leftist cause to stigmatize whites and sanctify minorities.

Neither outlet mentions that American can also mean anchor baby, naturalized citizen, or citizen of Mexican ancestry. And that is an important distinction, as just as corruption on the border is a brown problem, so is drug smuggling.

Whitewashing drug smuggling is just an Alinskyite tactic of lies, damn lies, and statistics. The real problem remains one of color, this time brown.