NYT's Kristof Wrong, Of Course—Democracy Threatened, Not By Trump, But By Totalitarian Left #Resistance. And He's Part Of It. 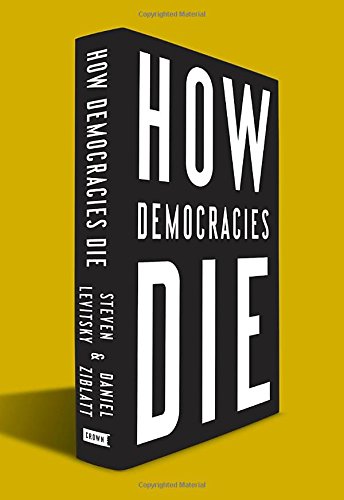 Democracy is decaying and it’s President Trump’s fault, according to the consistently hysterical Nicholas Kristof in America’s Paper of Record. Shilling for a new book, How Democracies Die, Kristof tells us Donald Trump has met every single criterion for an aspiring authoritarian. But if Kristof [Email him] was serious about who is the real threat to what’s left of Americans’ traditional liberties, he should just look in the mirror.

For all my confidence that our institutions will trump Trump, the chipping away at the integrity of our institutions and norms does worry me…This unraveling was underway long before Trump (Newt Gingrich nudged it along in the 1990s), but Trump accelerated it.

It matters when Trump denounces the ‘deep state Justice Department,’ calls Hillary Clinton a ‘criminal’ and urges ‘jail’ for Huma Abedin, denounces journalists as the ‘enemy of the American people’ and promises to pay the legal fees of supporters who ‘beat the crap’ out of protesters. With such bombast, Trump is beating the crap out of American norms.

Similarly, President Trump was recently identified as the greatest threat in the world to the freedom of the press [Trump Named The World’s No. 1 Oppressor Of Press Freedom, by Willa Frej, Huffington Post, January 9, 2018].

Meanwhile, back in what the Left used to call the “reality-based community,” it was only last Tuesday that yet again a Federal judge, based on nothing except his political opposition to the president, decided the unliteral liberalization of immigration law must remain in place forever and that the Commander-in-Chief had no authority to reverse DACA. Even the toothless Respectables at National Review found themselves aghast at “rhetoric in a judicial decision [which] would have been unthinkable barely a year ago… but now it passes for the new normal” [A Ludicrous Ruling That Trump Can’t End DACA, by Josh Blackman, January 10, 2018]. Letting a random Federal judge dictate immigration policy seems like something even Thomas Jefferson wouldn’t tolerate, let alone a Vladimir Putin.

And when it comes to beating “the crap” out of protesters, the Main Stream Media has been fairly explicit in its support of the Democrat Party’s paramilitary wing, otherwise known as Antifa. Kristof’s own publication gleefully promoted the idea of “punching Nazis”—with “Nazis” meaning anyone who agrees with an immigration policy an American of any other generation would have taken for granted.

This is the context in which Congressman Keith Ellison, a Black Muslim and Deputy Chairthing of the Democratic National Committee, has just explicitly endorsed Antifa, praising a book authored by an admitted Communist that calls for attacks on Trump supporters. 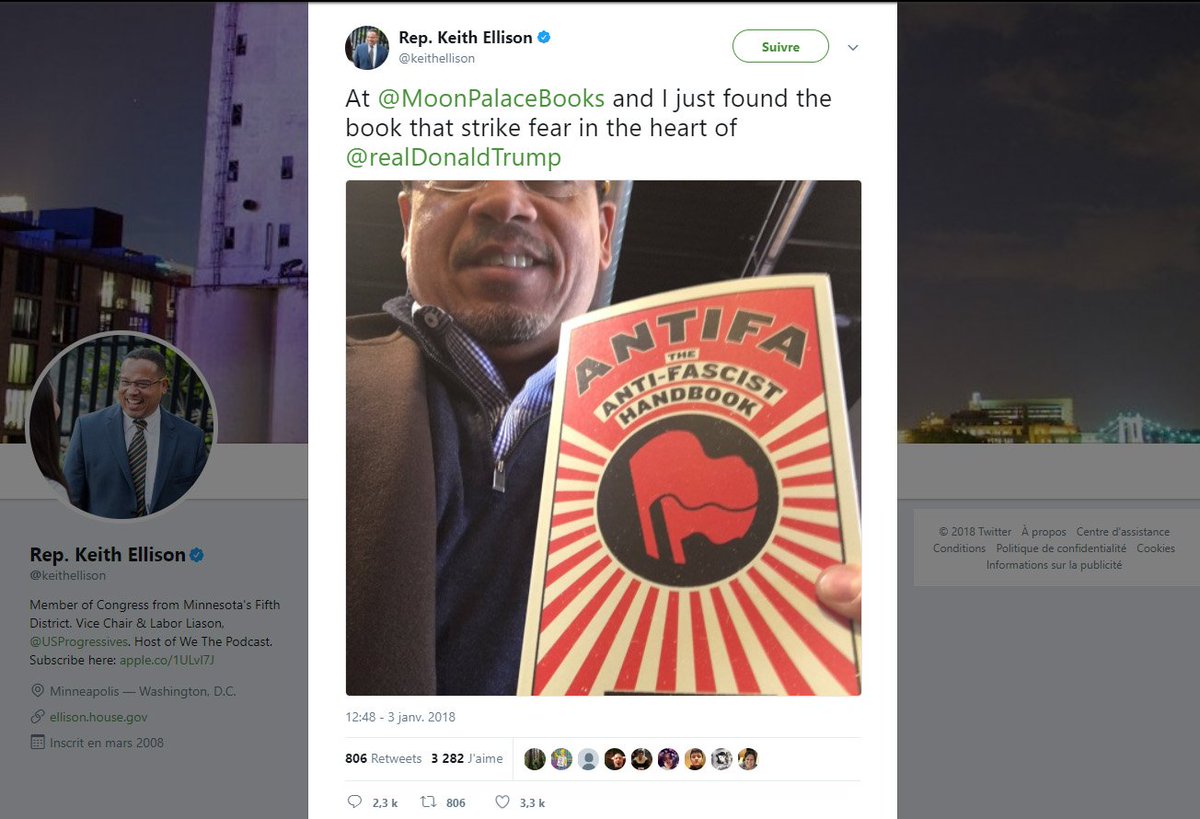 Author Mark Bray [Tweet him] a lecturer at Dartmouth College—is absolutely open about his totalitarian ambitions:

“Our goal should be that in twenty years those who voted for Trump are too uncomfortable to share that fact in public. We may not always be able to change someone’s beliefs, but we sure as hell can make it politically, socially, economically, and sometimes physically costly to articulate them.”

But what does Ellison care? It is not a slur, but a statement of fact to point out that he is a black nationalist who has openly called for the breakup of the U.S. and the creation of a black ethnostate. At least some blacks serving in Congress today seem to believe this is a good idea.

Needless to say, not only did Leftists not disavow Ellison’s statements, but even Republicans remained utterly silent.

Still, there is a point somewhere lost amidst Kristof’s nonsensical rhetoric. Liberty is indeed a fragile thing, dependent on certain cultural and institutional norms being perpetuated. When every institution becomes delegitimized, the result is either tyranny or civil war.

But who is delegitimizing these institutions? President Trump is not the one who is spying on journalists: President Obama was, as even The New York Times admitted [If Donald Trump Targets Journalists, Thank Obama, by James Risen, December 30, 2016]. It’s not President Trump who is using organs of the state to target political opponents: that was President Obama and his use of the IRS [Trump DOJ settles lawsuits over Tea Party targeting by Obama IRS, by Brooke Singman, Fox News, October 26, 2017]. And it’s the Left which is now using the courts for blatantly political ends.

Even law enforcement is now entirely a question of “Who, Whom?” rather than any kind of objective standard. The book has been thrown at those Unite The Right attendees in Charlottesville, Virginia who simply wanted to peacefully go to a legally sanctioned rally. Meanwhile, violent Antifa who openly declare their intention to use violence against political opponents are released by gleeful judges who agree with their political ends and are given adoring press by Leftist journalists.

The case should not be overstated. The American system still provides many legal protections to patriots—protections they should take advantage of. But even being ensnared in the legal system imposes a horrible cost on defendants. Witness the recent case of the Bundy family, who, although the case against them was dismissed, were caught in a nightmare because the federal agents withheld evidence, destroyed documents, and even lied about their activities.

Yet what the judge called “outrageous” conduct by the federal government did not inspire righteous indignation among the Great and the Good, but instead fury that the evil white men were not convicted. This from the same people who decry “police brutality”. [Bundy Case Dismissed In Staggering Blow To Federal Government, WND, January 8, 2018].

This tells us what journalists really consider “authoritarian.” However inelegantly, President Donald Trump has opened up the public debate, breaking the monopoly the MSM once held on what issues are allowed to be broached in public discourse. The entire history of President Trump’s first year is less about policy and more about the MSM/ Left’s struggle to reestablish control over the Narrative. And this is being done not in the “marketplace of ideas” but with increasingly blunt and crude instruments.

As James O’Keefe’s remarkable Project Veritas investigation  shows, Twitter’s nonwhite staff is gleefully censoring conservative perspectives on Twitter. The James Damore lawsuit against Google shows an overt environment of anti-white hatred at the world’s most powerful corporation. And even the leaders of America’s major political parties feel comfortable using “white” as an insult.

Meanwhile, what has the allegedly authoritarian Trump done against his political opponents? He occasionally insults them on Twitter, and gave them a tax cut. Some Fourth Reich.

Contra Kristof, it’s not President Trump or the conservatives who are creating an authoritarian climate in the United States, but the #Resistance. The #Resistance is a misnomer because it’s less an uprising against power than a counter-insurgency, an effort seeking to crush the patriotic and nationalist forces President Trump has inspired and so turn into America into something resembling the post-modern police state that now exists on most American college campuses.

Of course, like everything else, this ultimately revolves around immigration. As an ever greater percentage of the country’s population becomes, shall we say, “Sh*thole-Americans,” support for free speech continues to decline. As a cultural norm, it has all but vanished. All that remains is the strictly legal protection, which is only one Cultural Marxist judge away from being disapparated.

Kristof is posing as some great champion of democratic liberties, resisting the dark night of tyranny. But he has it backwards. There is no greater threat to the life, liberty, or safety of everyday Americans today than the typical MSM journalist. And our liberties are far safer in the hands of President Trump than trusted to the care of Kristof, his fellow journalists, or the rest of the post-American Leftists who are becoming increasingly overt about their desire to simply suppress those who disagree with them.