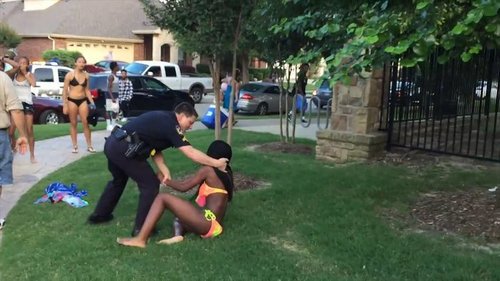 The NYT Obsesses Over Police "Brutality", And Ignores The Black Crime That Necessitates It

The New York Times recently compiled its police brutality/shooting videos, posting a link on the front page of its website.  See The Videos That Are Putting Race And Policing Into Sharp Relief, By Damien Cave And Rochelle Oliver    July 30, 2015,  and Police on Video: When the Camera Turns, July 30, 2015.

They also have an archive stories about “Police Brutality, Misconduct and Shootings”, including video.

We await the Times compilation of Flash Mob or Knock-Out game videos, or even one story about the black gangs in Los Angeles who have promised to kill 100 people, including innocents, in the next 100 days.

After the death of a Rollin 100 gang member, Los Angeles gangs have issued a challenge to kill 100 people as fast as possible. One of the first victims appears to be a 4-year-old boy.

Googling for "black gangs vow to kill 100 people new york times" returns a list of police brutality stories, the top one about man police shot to death in Madison, Wis.