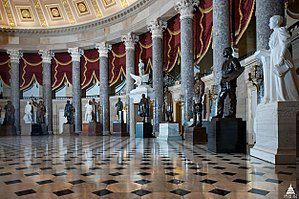 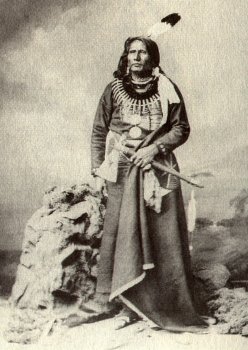 A note for your "Abolishing America" department

A few days ago Senator Ben Sasse (Cuck-Nebraska) led a delegation to commemorate placing a statue of Chief Standing Bear in the Capitol in Washington DC, replacing William Jennings Bryan's. [The civil rights leader ‘almost nobody knows about’ gets a statue in the U.S. Capitol, Washington Post, September 20, 2019 ]

Each state gets two monuments in the National Statuary Hall Collection  to showcase its state's leaders. A few years ago Congress permitted states to change the statues they would have represent them in the statuary hall.

Last year the Nebraska Legislature approved replacing both with statues of Chief Standing Bear, a chief of the Ponca Tribe and Willa Cather, novelist from the 20th Century.

The legislative action to replace the two men's statues sailed through the unicameral legislature with only one dissenting vote and an abstention from the state Senator representing J. Sterling Morton's home museum and park.

William Jennings Bryan led the populists in the late 19th and early 20th centuries, served in the cabinet of the Wilson Administration and ran for President.

Morton (right) was a leading Bourbon Democrat, journalist (!) and cabinet secretary during the Cleveland administration. He founded Arbor Day to promote trees to conserve natural resources.

Worst of all he opposed all-out war with the Confederacy during the Civil War and favored a negotiated end to the war.