There they go again. A study by researchers from the University of Chicago and Stanford business schools claims that racist and sexist discrimination on the part of U.S. employers is reducing worker productivity and economic growth. By eliminating biased hiring decisions, worker productivity and economic output could increase by 10% or more….they claim. [The Allocation of Talent and U.S. Economic Growth, by Chang-Tai Hsieh, Erik Hurst, Charles I. Jones, and Peter J. Klenow]

In classical economic theory worker productivity, as measured by output per hour, is determined by the amount of capital the average worker has to work with. Capital is broadly defined to include “physical capital” such as plant, equipment, computers, public infrastructure like highways and the electric grid that support workers, as well as the “human capital” embodied in individual workers, which includes education, skills, and experience.

Productivity was being hurt, according to the University of Chicago and Stanford team, by racist and sexist discrimination on the part of U.S. employers. Employers simply do not pay women and minorities as much as less qualified white males, resulting in a mismatch of workers and occupations.

The study was acclaimed credulously in the fashionable Leftist webzine Vox: 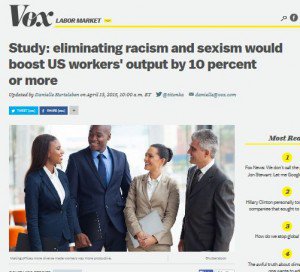 The researchers started from the assumption that different people's unique, innate abilities shouldn't differ by demographic group. [VDARE.com emphasis added] So when women and minorities were dissuaded from taking high-skill jobs in the 1960s, that meant the economy wasn't growing as fast as it could because its workers weren't fulfilling their full potential. (The researchers point to Sandra Day O'Connor, the first woman appointed to the US Supreme Court, as one example — even after graduating third in her Stanford law school class, she could only find work as a legal secretary at first.) [VDARE.com note: This happened 63 years ago.]

So the researchers assumed that removing occupational barriers like discrimination naturally makes the workforce more productive, by putting people into occupations to which they are better suited — if Sandra Day O'Connor has a comparative advantage at being a lawyer, then it makes sense for her to pursue that.

Study: eliminating racism and sexism would boost US workers' output by 10 percent or more, by Danielle Kurtzleben,[Email her] April 13, 2015

The late Gary Becker, a 1992 Nobel laureate, wrote the standard analysis, The Economics of Discrimination, as long ago as 1957. In a free market, Becker argued, there is an inevitable tendency for everyone to be paid the marginal value of his or her labor. This means that ultimately, you are likely to be paid something like what your work is worth. If you are in an unpopular group—a racial minority, for example—employers may pay you less. But that means they will make more money off you. Because you will be such a profitable hire, your services will be demanded by other employers, and your wages will be bid up.

Employers who continue to pay minority workers less than their “marginal product” will lose those workers to competitors. They will not survive. This process can be forestalled only by monopoly or government intervention—both of which occurred, for example, in South Africa under apartheid. And now in the U.S. under Affirmative Action.

If you believe that racism is pervasive and that only the Federal government can keep it in check, you won’t like what Becker is saying. But the evidence clearly supports him.

"Once adjustments are made for factors like age, education and experience, 70% to 85% of the observed differences in income and employment between the various groups in America disappears," said economist Howard R. Bloch of George Mason University. "That's been shown by studies dating back to the mid-1960s. And you can't even be sure that the residual gap is due to discrimination. It could be due to factors we haven't controlled for."

All of which exposes the fraud underlying claims of discrimination and that programs like Affirmative Action could improve productivity.

Note also the Chicago-Stanford teams’ assumption that “different people's unique, innate abilities shouldn't differ by demographic group.” This is, of course, the Standard Social Science Model, but its application to economics is particularly tricky because there are objective empirical differences between groups, irrespective of whether they are innate.

Thus worker productivity languished (although absolute output increased) when women and the young Baby Boomers flooded the U.S. workforce in the sixties and seventies. The employment of any unskilled, poorly educated group, whether composed of minorities, immigrants, or the native-born, will inevitably lower worker productivity below what it would have been in their absence.

Thus, because minority and immigrant workers generally have lower levels of human capital than native-born, they will depress productivity more than equal numbers of native-born workers.

Plus, of course, we can’t expect the Chicago-Stanford team to consider the possibility that “demographic groups” actually do differ in “unique, innate abilities,” although the evidence for this is now overwhelming .

They have to get tenure, after all. Did you think universities were about free inquiry?