Did Intel Stand Up for White Males on Thursday? 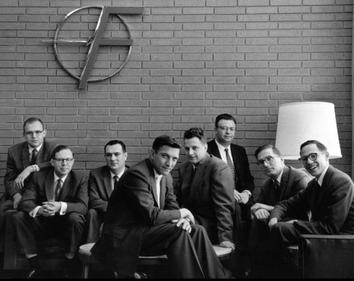 Shockley’s “traitorous eight:” What have white males ever done for the world?

Did Intel stand up for white males on Thursday? Sort of, but, unsurprisingly, on Friday Intel started apologizing for their boycott of advertising on the website of a female journalist of dubious ethics who tries to distract from her corruption by denouncing white male gamers.

Intel is usually given pride of place in histories of who put the silicon in Silicon Valley. In one telling, William Shockley recruited the best electronic hardware minds like Gordon Moore (of Moore’s Law) and Robert Noyce (here’s Tom Wolfe’s 1983 article on Noyce’s background), but eventually the Traitorous Eight (pictured above) defected to Fairchild. In 1968 some of them started Intel, which has more or less been the flagship for silicon chips ever since.

(An alternative theory of Silicon Valley history is that Shockley’s friend, Fred Terman, son of the inventor of the first American IQ test, the Stanford-Binet, and a mentor to Hewlett and Packard, was the true father of Silicon Valley. In either case, Shockley and Terman were ardent eugenicists, and what’s now Silicon Valley was central to the eugenics movement in America going back to the first president of Stanford.)

As I’ve been pointing out for awhile, the really big money in today’s Silicon Valley attracts a certain type of woman that earlier generations called “adventuresses.” For example, the pillow talk secrets of CEO Hector Ruiz of AMD, the second most important offspring of the Traitorous Eight, were betrayed to Galleon’s notorious inside trader Raj Rajaratnam by his mistress Danielle Chiesi.

Adventuresses can add interest to life. But, the easy money these days is in being an anti-white male scold, no matter how transparently hypocritical. So Silicon Valley’s latest generation of adventuresses have added feminist and racist scolding to their repertoires.