National Data | As I Pointed Out Ten (!) Years Ago, Mass Deportation Would Pay For Itself

The New York Times thinks that deporting the estimated 11 million illegals will be financially impossible, and they have interviews with defeatists like Michael Chertoff (who managed to deport some illegals as head of Homeland Security under George W. Bush) and former Border Patrol Chief David Aguilar to prove it. (A 2004 Border Patrol Hispanic Heritage Month presentation said Chief Aguilar was considered a “trusted spokesperson within the Hispanic community, communicating border-crossing policies that have a profound impact on Hispanic communities along the border.” No doubt the “Hispanic community” still feels that.)  The NYT insists that

“Mr. Trump has suggested he will flesh out his ideas in a forthcoming speech. But experts across many fields who have analyzed his plans so far warn that they would come at astronomical costs — whoever paid — and would in many ways defy the logic of science, engineering and law.”

What Would It Take for Donald Trump to Deport 11 Million and Build a Wall? By Julia Preston, Alan Rappeport and Matt Richtel, NYT, May 19, 2016

Where do they get these ideas? From bought and paid for think tanks.

One group   questioning whether deporting illegal aliens is worth the cost: The American Action Forum (AAF)

One AAF report put the total cost of removing all 11.3 million illegals living in the U.S. at between $420 billion and $619 billion. That is based on the assumption that 20% of the aliens would leave voluntarily [The Budgetary and Economic Costs of Addressing Unauthorized Immigration: Alternative Strategies, By Ben Gitis and Laura Collins, March 6, 2015]

But let’s do the math. Deducting those who would self-deport we are left with 8.96 million illegals that the U.S. government would have to forcibly deport. Dividing AAF’s low and high cost estimates by these involuntary deportees, we arrive at a per deportee cost ranging from $45,000 to $67,000. By comparison, ICE—the government agency in charge of deportations, estimates that it costs $12,500 to deport an illegal alien. [ ICE reveals cost for deporting each illegal immigrant, By Mizanur Rahman, San Francisco Chronicle,  January 27, 2011]

The AAF study assumes that it would take 20 years—20 years!—to remove all illegals from the U.S. So the (admittedly) scary headline cost estimates—$400 billion and $600 billion—translate to $20 billion and $30 billion per year over the twenty-year deportation period.

This absurdly long farewell is required, AAF says, because ICE currently has the capacity to eject only 400,000 illegals per year. In other words, even given a determined deportation policy, AFF does not envision the federal government making any effort to increase the capacity of the federal agency responsible for deportations. 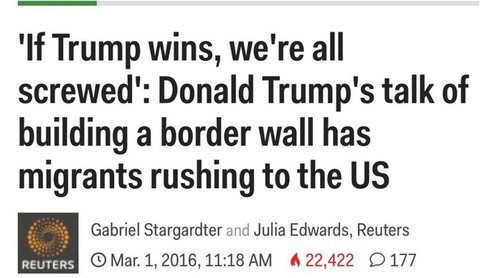 Moreover, more than half of AAF’s “deportation” cost estimates are monies needed to keep new illegals out during the 20-year period we would be ejecting the illegals already here. In effect, AAF adds border control costs to deportation costs, as if the former would cease once the deportation process is over.

The Columbus Dispatch writes that “Donald Trump says he would deport all illegals, including their children who are citizens” within two years. [Booting all undocumented immigrants could cost at least $400 billion, conservative group says, By Encarnacion Doyle, March 20, 2016]

To do it over that time span would require a massive mobilization of resources. AAF is reported to have said that a 2-year deportation blitz will require to require 90,682 apprehension personnel, 348,831 detention beds, 1316 immigration courts, 32,445 federal attorneys to process the immigrants, and 17,296 chartered flights to return them to their countries of origin. It is not clear how much Trump’s plan would cost, but surely a 2-year deportation program, by processing millions annually, will achieve economies of scale unavailable to a 20-year program processing only 400,000 annually.

To understand why AAF inflates its deportation cost estimates, just follow the money. Not the Federal tax money: the donor money. The Koch brothers given millions to the forum as part of the now-familiar quid pro quo: our money for your “research” supporting open borders [The newest dark money power player: American Action Network, By Zachary Roth, MSNBC, March 18, 2014]. The Kochs see illegal aliens as a profit center rather than a problem. 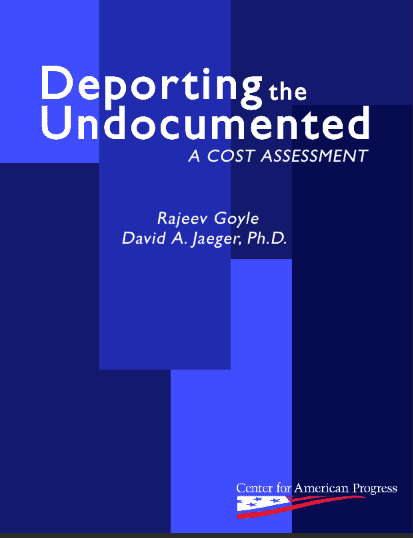 Liberals play the same game. A decade ago (!), I looked into Deporting the Undocumented: A Cost Assessment published by the Center for American Progress (CAP), a liberal think-tank. [No-one's Suggesting Mass Deportation—But It Would Pay For Itself, VDARE.com, January 26, 2006] Touted as the first-ever estimate of costs associated with apprehending, detaining, prosecuting, and removing immigrants who entered illegally or overstayed their visas, the study put the cost of mass deportation at $206 billion over five years- $41 billion per year. The CAP study assumed that about 10 million illegals would be subject to deportation and 2 million would leave voluntarily if a mass deportation program was announced.

That $206 billion figure seemed absurdly large. The largest chunk of it, apprehension costs, was put at $141 billion. In arriving at this figure, researchers blithely assumed that the historical, abysmally low, deportee apprehension rates would continue under a mass deportation regime:

We extrapolate from the available evidence to provide an estimate of the per-apprehension cost. In 1999, 240 agents apprehended 2,849 unauthorized workers, and, as noted above, 90 agents apprehended 445 unauthorized workers in 2003. Assuming a typical annual cost of $175,714 per agent, and after summing the number of apprehensions (3,294) and agents (330), the average apprehension cost comes to $17,603. Assuming a 20% voluntary departure rate, the total costs for apprehending 8,000,000 undocumented immigrants would be $141 billion over five years.

Ten deportees per agent per year is the apprehension rate the researchers used in estimating the cost of apprehending 8 million illegals. Ten per year! You can find more illegals in front of Walmart in a single afternoon.

Mass deportation cost estimates have been inflated beyond reason. The deportation process will not be cheap, but once done, it is done. The benefits, in terms of reduced fiscal deficits, higher incomes, jobs created for displaced workers (native-born and legal immigrants alike) will, hopefully, go on forever.