The Sound Of Europe: So Long, Farewell, Political Center.

A striking feature of last weekend's AmRen conference—other than its youthfulness, I mean—was its international flavor.

There were ten speakers. Subtracting out Jared Taylor's address and Sam Dickson's traditional benediction, the other eight broke out by nationality as: a Mexican, a South African, an Estonian, two Belgians, and three Americans. (I’m counting VDARE.com Editor Peter Brimelow as an American).(Videos of James Edwards, Peter Brimelow, Fernando Cortés, Filip Dewinter, and Jared Taylor are now available at Amren.com)

That’s appropriate, because there have been some National Question developments particularly in Europe that are worth noting.

There's an Austrian presidential election every six years, on a straight popular vote.

They just had that election. [Austria far right thwarted, Van der Bellen elected president, BBC, May 23, 2016] The winner was a chap named Alexander Van der Bellen, who ran as an independent. That was surprising enough in itself, as political power in Austria tends to belong to one or other of the two biggest parties, one center-right and one center-left.

In this presidential election, both of those parties were eliminated in the first round of voting a month ago. The center-left placed fourth, the center-right placed fifth. The two leading candidates went to a run-off election, and that's the one we had last week.

The winner, and so the new president, ran as an independent. But in practice he's a Left-liberal environmentalist. Austria's a very pretty country—think mountains, lakes, edelweiss, lederhosen, and so on. Naturally environmentalism is strong there.

It's surprising enough by itself for an independent to win the presidency. What's even more surprising is that Mr. Van der Bellen won by just a whisker over his runoff opponent, Norbert Hofer of the Freedom Party. The actual size of the whisker: 0.7 percent, or about one vote out of 150.

The Freedom Party is the one you see tagged with the epithet "Far Right" in the Main Stream Media.

But since they just got 49.7 percent of the popular vote against Mr. Van der Bellen's 50.3 percent, it seems a bit odd to call them "far" anything. There were seventeen American presidential elections in which the winning candidate got less of the popular vote than did Mr. Hofer. The list includes, for example, Harry Truman in 1948, Bill Clinton in both '92 and '96, Woodrow Wilson in both 1912 and 1916, and of course Abraham Lincoln in 1860. Do those presidents get an epithet beginning with the word "far"? If not, why not?

Mr. Hofer's Freedom Party gets called "Far Right" because they're National Conservatives who want to stop the Third World invasion of their country. The Left of course will tell you that, no, it's because among their supporters are fans of the 20th century's most famous Austrian—and I'm not talking about Maria von Trapp.

I'm sure they're right. I have worked in politics at the ground level, attending constituency meetings for my local chapter of the Conservative Party back in the Margaret Thatcher years. Let me tell you, in case you don't know: Politics at the base level attracts a fair number of lunatics.

Most people, however, even most constituency activists, are not lunatics. Should Austria's Freedom Party win the next parliamentary election two years from now, Austria will not invade Poland or start erecting gas chambers. Trust me on this.

Austria of course, with no offense to anyone, is not a very important place. What happened there this election, though, is happening all over. The Center Left and Center Right are losing market share. They're losing to, on the one hand, tree-hugging anti-capitalists like Mr. Van der Bellen and Bernie Sanders—another politician from a small, pretty, mountainous place—and on the other hand to secure-borders nationalists like Mr. Hofer and Donald Trump.

The pattern is unmistakable. Manual workers in Austria went 86 percent for Mr. Hofer; he only got 40 percent of white-collar workers.

Over to the U.S.A., where analyst Thomas Edsall just reported in the New York Times that Mrs. Clinton's support among white men without college degrees is at fourteen percent.

That is a simply sensational figure. This is the Democratic Party, remember—the lunch-pail party, the party of the little guy. White men without college degrees, fourteen percent for the party's presumptive nominee. That's pretty much a lunatic fringe. Fourteen percent.

I note in passing, by the way, that Edsall's column I just quoted bears the title: How Do You Solve a Problem Like Trump? [May 25, 2016]

Looks like Edsall has Austria on his mind, too.

That's the eastern bit of what we Cold War survivors recall as . Before it was Czechoslovakia it belonged to the Dual Monarchy of Austria-Hungary.

Radio Derb devotees will recall us covering Slovakia back in February as one of the Visegrad Four nations: Poland, Hungary, Czechia, and Slovakia, all of them robustly nationalist. I swooned over Slovakian Prime Minister Robert Fico’s saying back then that:

We will never make a voluntary decision that would lead to the formation of a unified Muslim community in Slovakia … Multi-culturalism is a fiction.

I mentioned that Slovakia had an election coming up in March. They duly had it. Mr. Fico is still Prime Minister, though now as head of a four-party coalition. [President Kiska will authorise Fico to form government, Slovak Spectator March 7, 2016

He's still nationalist, too. Last week, in an interview with a local newswire service, the Prime Minister said: "It may look strange but sorry … Islam has no place in Slovakia.”

The European Union is trying to force quotas of so-called "asylum seekers" on all the countries of Europe. Prime Minister Fico is firmly against those quotas.

This small and inconsequential country is giving a big lesson. Mr. Fico's party actually is center-left. It's a Social Democratic party. He himself was once a Communist Party member.

So here's an alternative for the Center Left and Center Right: Instead of watching your working-class support drain away to nationalists, steal some of the nationalists' clothes.

Slovakia actually does have a strongly nationalist party: Marian Kotleba's People's Party. In those March elections they got eight percent of the vote, up from less than two percent last time around. They now have seats in parliament for the first time ever.

That's why Center Left Prime Minister Fico is stealing their nationalist clothes. It's roughly like Hillary Clinton calling for strict enforcement of our immigration laws, if you can imagine that.

Message to the centrist parties re nationalism: If you can't beat 'em, join 'em.

But generally, it’s not happening.

The new party on the block: Alternative for Germany, AfD for short. AfD is a National Conservative party, and they are racking up double-digit percentages in local elections.

Earlier this month the AfD, at its annual conference, inserted the sentence "Islam does not belong to Germany" into its official policy platform.

That of course got the globalists gasping and sputtering. Here for example is German pundit Anna Sauerbrey [Email her] sputtering in English for the New York Times:

[AfD] refers to German culture as the "einheimische Kultur"—native culture—and describes the German nation as "a cultural unit" under threat from immigrant cultures. Its program for the state election in Baden-Württemberg in March stated: "Germany's cultural foundation is being smashed by immigration." …

It follows, at least for the new German right, that cultures can be compared and ranked—some are worth preserving, while others are invasive and inferior. German culture is under constant risk of losing its purity, and its defense is a core role of the state. It is a thinly veiled update of the old racist ideologies: culturism as the new racism. 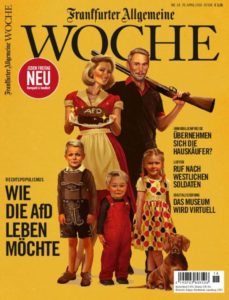 See how far the Left has traveled here? Time was they would scream and sputter at you for saying that some races are better than others. "It's nothing to do with biology," they'd shriek, "it's just culture!" Now they scream and sputter if you say that some cultures are better than others.(Pictured right, the German MSM's satirical picture of"einheimische Kultur"—and below that, the AfD's reply.)

What people like Ms. Sauerbrey seem unable to grasp is that it is possible—in fact it's rather 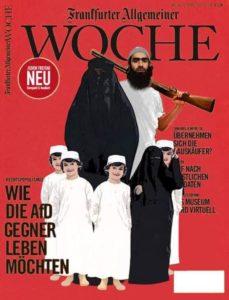 common—to be against mass immigration without holding any opinion at all about whether one culture is better or worse than another.

I for example am fine with Islam. If people want to be Muslims, that's absolutely OK with me. I don't mind a bit. Jolly good luck to them. There are fifty-odd majority-Muslim nations where they can live out their lives in Islamic culture. Far as I'm concerned, they're welcome to do so. I wish them joy.

If you want to be a Muslim, or a Zoroastrian, or an anarcho-syndicalist, or a blood-drinking head-hunter—go ahead. I wouldn't dream of trying to interfere.

Just please stay in your own countries and be those things. Leave me in my country to enjoy the culture I grew up in and am familiar with: Modern, Western, not-very-religious, sexually egalitarian, easy-going, English-speaking social-democratic culture.

Is my culture better than yours? Pass. Is Islam a stupid, cruel, and wrong-headed religion? No idea. Does Sharia law entail a shackling, an enslavement of the human spirit? Beats my pair of jacks. Just, please, leave me the heck alone with the culture I know and am happy in; and I'll return the favor.

Again, the German Center parties show no sign of adapting to the National Conservative challenge and recognizing this point.

But we have a saying here on the Alt Right (Dissident Right): That's what separate countries are for.