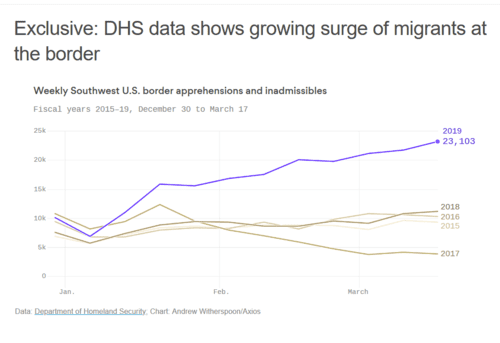 More Dead Americans—What The Collapse Of The Southern Border Means 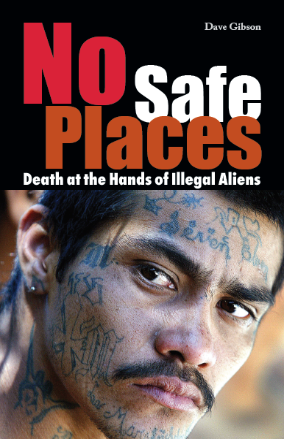 Quietly, with almost no attention from the media and ominously little from the Trump Administration, the U.S. southern border with Mexico has collapsed. The implications of this will be profound, for example in accelerating the Democrat drive to Elect A New People. It also means more Americans will fall be killed by illegal aliens.

Eight years ago, a Government Accountability Office report [PDF] counted nearly three million crimes already committed by illegal aliens in the United States, including nearly 70,000 sex crimes and over 25,000 homicides. The numbers have obviously risen since then.

ICE Director Sarah Saldana testified before Congress that 66,565 previously convicted illegals were released onto American streets under the Obama administration’s permissive rules during fiscal year 2013-14 alone. These criminals went on to account for about 30,000 DUIs, 800 sexual assaults and 300 murders.

Dave Gibson is a writer who specializes on the subject of illegal alien crime. He maintains a website, IllegalAlienCrimeReport.com, which features daily updates. As he likes to emphasize, all such crime is preventable, since only lax enforcement of our laws against illegal entry gives the perpetrators an opportunity to commit it.

Mr. Gibson recently published a book through The Social Contract Press entitled No Safe Places: Death at the Hands of Illegal Aliens. Drawing on his own extensive reporting, he takes the reader beyond the statistics to confront the human reality of death and bereavement. Each of his fifty chapters tells the story of a fatal incident involving one or more illegal aliens. A few are well-known; most were only local news items, quickly forgotten except by friends and relatives of the deceased.

Some of the stories nearly defy belief. A roofer in the country for just two months was angry after leaving a party where his sexual advances had been rejected by a number of women. He broke into a home at random and raped a 93-year-old woman [Murder charge filed after 93-year-old rape victim dies,AP, JournalStar.com, July 25, 2013 ] Police found him naked and unconscious on top of the victim in her bedroom. There was blood on the walls, floor, ceiling and bed. The victim’s cheekbones, nose and several teeth were broken during the ordeal.

Some stories highlight the fecklessness and unreliability of the authorities. In October 2011 Honduran national Luis Alberto Rodriguez sped through a flashing red light in the small town of Kill Devil Hills on North Carolina’s outer banks. He crashed so hard into a pickup truck that it flipped over, killing 51-year-old Joe Storie and seriously injuring his wife and sister. Rodriguez and the two women were taken to Norfolk General Hospital.

The Kill Devil Hills Police Department requested aid from the Norfolk Police Department to ensure Rodriguez did not leave the hospital. Although Norfolk police officers were already stationed at the hospital, the department claimed they could not spare the manpower. So the Kill Devil Hills police merely called the hospital every day to check on Rodriguez’s recovery. Each day they were told “he is in no condition to walk out of here”—right up to the day he did walk out.

Rodriguez made his way to the Sanctuary City of Raleigh, where he was arrested. He was charged with one count of felony death by vehicle, two counts of serious injury by vehicle, and one count of driving while impaired. Rodriguez was then released on bond by a black judge, J. Carlton Cole, whose wife was an attorney defending illegal aliens. Rodriguez disappeared, and remains a fugitive.

Gibson interviewed Joe Storie’s surviving sister Chris, who had the following to say:

After I got home from Norfolk Hospital, the Kill Devil Police Department called and told me that Luis Rodriguez was under 24-hour watch to make sure he did not leave the hospital. Later we learned he was never under any kind of watch. I was told lie after lie. Chief Britt stood my sisters up for a meeting we had scheduled with him after we had driven seven hours to meet with him. Then he would not take my calls. After I gave a fake name he came right to the phone and was not very nice at all when he found out it was me.

The police later explained to her that drunk driving is part of Honduran culture.

Some stories demonstrate just how long a rap sheet an illegal can run up without danger of deportation—until Americans are killed. In September 2008 Guatemalan national Francis Hernandez sped through an intersection in Aurora, a suburb of Denver, Colorado, and slammed into a pickup truck, killing two women. The pickup was hit with such force that it crashed through the window of a Baskin-Robbins ice cream shop, killing a three-year-old child as well. 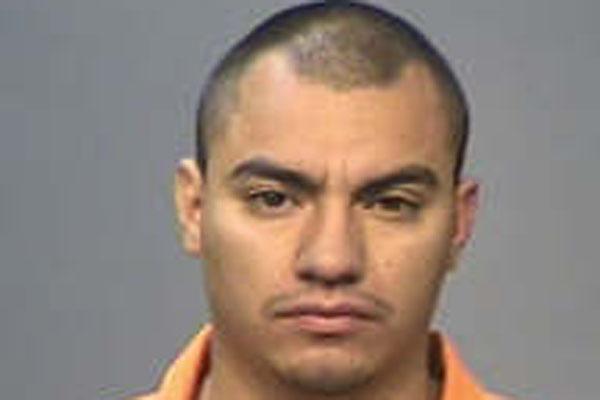 Hernandez fled the scene, but was later apprehended. He was discovered to have no fewer than 12 aliases and two dates of birth. [Driver in Aurora triple fatal is Guatemalan national,by Tom McGhee, Denver Post, September 8, 2008]  Although he had been arrested 19 times by nine different police departments over the previous five years, no deportation proceedings had ever been started against him. At the time of the incident, Hernandez had no driver’s license and no insurance.

Some of the stories are, as they say, hard to read. Eighteen-year-old Joshua Wilkerson gave an illegal a ride home. He was later found tied up, with multiple fractures in his face and nasal cavity, his throat and voice box crushed. He was kicked so hard in the stomach that it sent his spleen into his spine, slicing it in two. The medical examiner said it was torture. His remains were left in a field and set ablaze. 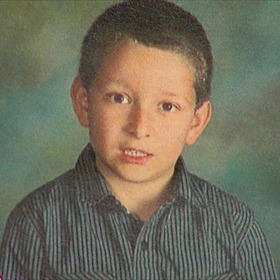 Some of the stories involve outrageous miscarriages of justice. Luis Enrique Landin was texting while driving. He dropped his phone; as he reached down to retrieve it, his Ford ranger jumped the curb and fatally struck six-year-old Brandon Abrams  (left) who was waiting for the ice cream truck. The impact knocked the little boy out of his shoes and sent him flying through the air. A grand jury failed to indict Landin, and he walked free.

Little better was the nine-month sentence handed down to Jose Rodriguez, a previously-deported Mexican national with multiple convictions, including one for DUI. Despite being in the US illegally and having no driver’s license, he was able to secure a job with a waterproofing business. Rodriguez was driving a company truck when he sped through an intersection and took the life of six-year-old Mackenzie Maddox.(Pictured right.) [Driver may face federal charges | Man accused of illegal U.S. re-entry, by Annysa Johnson, journalsentinel.com, June 11, 2008]

Some of the incidents recounted by Gibson provided a political education for survivors-turned-activists. Angie Morfin is an Hispanic American woman from Salinas, California. Her thirteen-year-old son Ruben was shot point-blank in the head by a Mexican gang member for no particular reason. The man fled to Mexico and was only arrested four years later.

Mrs. Morfin was stunned to learn that the Salinas Border Patrol station employed just one agent for a three-county area. She became an activist against illegal immigration and has testified before a US House Subcommittee. She recounts:

We had been raised to be good Democrats, but as I made the rounds, I noticed that it was only some Republicans who really cared and wanted to take action to stop the madness. The liberals who love to sing “Kumbaya” simply wanted to keep things the same.

Mrs. Morfin has been vilified and called a traitor by others in the Latino community for her outspoken stance against illegal immigration.

There are some recurring themes among the fifty incidents recounted. Many involved drunk driving or driving without a license. Many of those killed were officers of the law.  All but one of the illegal alien killers were Latin American: mostly Mexican, Guatemalan or Honduran. Only one killer got the death penalty. A number are still fugitives or have escaped punishment by returning to their home countries. Many newspaper reports of the crimes recorded here make no reference to the perpetrators’ illegal status.

Readers of Dave Gibson’s No Safe Places will come to know the reality of illegal alien crime. They will also know just what to make of recent Democratic denials that any “border crisis” exists—and how serious the current collapse