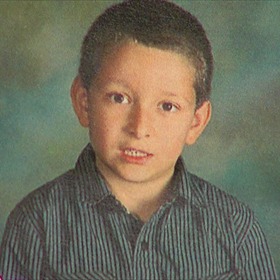 In San Antonio, a six-year-old boy was hit by a drunk-driving illegal alien on Thursday evening and died en route to the hospital. First-grader Brandon Abrams (pictured) was struck as he rode his bike on the sidewalk while waiting for an ice-cream truck.

The driver, 17-year-old Luis Enrique Landin, reportedly lost control of his pick-up when he reached for the cell phone he had dropped.

Landin faces the charge of intoxication manslaughter and was driving without a license. Authorities placed an immigration hold on him, yet bail was set at $100,000. Go figure. Plenty of illegal alien criminals have used bail to depart for the dear homeland.

A day after watching a 6-year-old neighborhood boy fly through the air when he was fatally struck by a teenage driver suspected of being intoxicated, Jane Withers refused to leave the spot where the boy’s mother tried in vain to save him.

Overcome by the magnitude of the tragedy that left Brandon Abrams’ family grieving and a 17-year-old jailed on intoxication manslaughter charges, Withers helped set up a makeshift memorial soon after the incident at 6 p.m. Thursday in her Northwest Side neighborhood.

Brandon was waiting on the sidewalk for an ice cream truck when he was struck. According to a police report, the driver involved, Luis Enrique Landin, told officers he’d dropped a cellphone and was reaching to pick it up when he lost control of his Ford Ranger in the 9300 block of Autumn Sunrise.

Withers saw it all from her garage.

“I saw (Brandon) fly in the air and hit the ground,” she said, pausing to hold back tears. “I’ve never seen anyone fly through the air so much. … He was doing the right thing, riding on the sidewalk.”

She said Landin told her he had just looked down to get his phone when he hit the boy.

As she spoke, Brandon’s bright red bike lay crumpled on the grass. The impact had knocked him out of his little black shoes, marked as evidence on the roadside.

She maintained a constant vigil at the site throughout the day Friday, as friends, family and neighbors dropped off stuffed animals, candles and flowers for Brandon.

By Friday evening, about 100 mourners gathered at the site to remember the Nichols Elementary school student who had just won first place at his Cub Scout pack’s Pinewood Derby.

Landin was arrested on a charge of intoxication manslaughter Thursday and bail was set at $100,000. Police said he was driving without a license.

On Friday, U.S. Immigration and Customs Enforcement had placed a hold on his release, meaning the agency intends to take custody of him because it believes he’s is in the country illegally.

“He was just a really bright light,” Edwards said. “He was really energetic. We’re all really going to miss him.”

Brandon’s grandfather Steve Abrams spoke angrily about the boy’s admission to police that he was distracted while driving.

“That stuff has to stop. The cellphone is ridiculous, the drinking,” he said, in reference to the intoxication manslaughter charges. He questioned why a 17-year-old would be “drinking at 5 o’clock in the afternoon.”

Police said Brandon’s mother was among the first on the scene and attempted CPR. Withers said the boy faded in and out of consciousness as she and others tried first aid.

The boy was taken by helicopter to University Hospital, where he was pronounced dead.

Friday evening, at a vigil at the site of the crash, friends and family members spoke fondly of the boy who most said loved to smile. Members of his Cub Scout Pack 352 turned out as a unit to light candles in memory of their fallen friend.

Pictures and written words of condolences were tacked to a fence. Donations were dropped in a bucket beside the memorial to help the family defray the cost of burying the child.

Briana Linstad, 7, and her 10-year-old brother, Ricky, who live next door to the Abramses, would ride their bikes with Brandon according to their mother, Adriana Linstad.

Derek Sweet, 19, said he drove to the neighborhood because Brandon’s death made him think about his own little brother.

“There are people coming from all over,” Sweet said Friday afternoon.

When neighbors urged Withers, who maintained a constant vigil at the memorial she helped create, to go home to rest and eat, she declined.