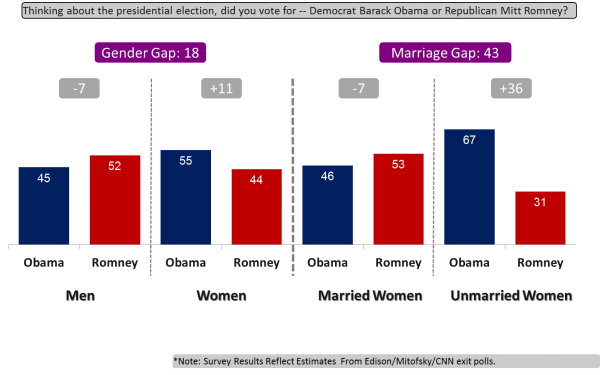 Greenberg is double counting the gaps, while I present them as just the difference between Romney's percent among one group and his percent among another. But the message is similar. The marriage gap has been bigger than the gender gap for a half dozen consecutive elections (at least): This marriage gap is not new.  Marital status has been driving how voters vote—and, whether they vote—for several election cycles.   What is different about this cycle is that the Obama campaign was the first national campaign to recognize the importance of unmarried women and target advertising and messaging explicitly to these voters.   This proved a smart investment.

The key for Obama in 2012, thus, was to agitate the fringiest element: single women who didn't bother to vote in the unglamorous 2010 election.