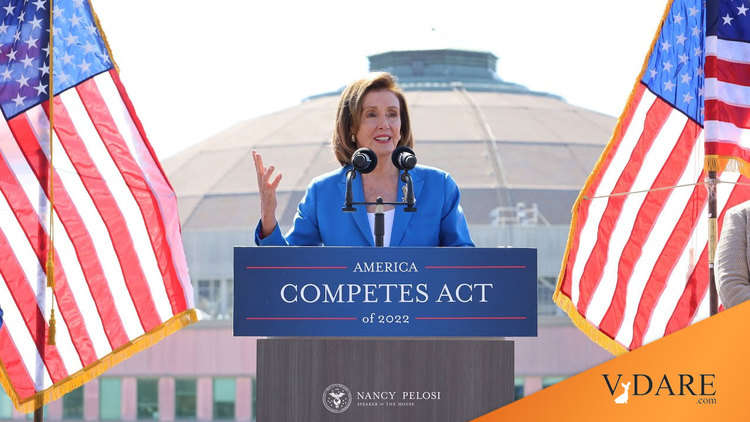 Our overlords in the Beltway Swamp depend on you not paying attention. COVID-19 was a weapon of mass distraction for the past two years. Ukraine is the new shiny toy.

Put down their bread. Take your eyes off their circuses. Pay attention.

In the bought-off halls of Congress right now, Senate and House collaborators are preparing to send legislation to President Joe Biden that will open the floodgates to more foreign tech workers, wealthy foreign investors and foreign students—while our own homegrown American tech workforce, American business owners and American STEM graduates are still reeling from pandemic disruptions and displacements. The Senate passed the $250 billion U.S. Innovation and Competition Act last June. The House passed a similar measure, the $350 billion America Competes Act, last month. Biden wielded his State of the Union address to push for reconciliation of the two bills so he can commence another massive giveaway to foreign and domestic special interests.

The just-approved House bill would create a new visa category on top of the dozens of alphabet-soup visas already in existence. According to the open-borders, big business-backed American Action Forum, the "W" visa program will benefit three groups of foreign nationals: "W-1, entrepreneurs with ownership interest in a start-up; W-2, essential employees of a start-up; and W-3, W-1 and W-2 holders' spouses and children." Based on dubious "job creation" criteria similar to the fraud-riddled EB-5 investor visa program, if the foreigners' startups are "successful," the W visa holders could soon join the already overwhelming annual tide of 1 million green card winners who take up jobs in the U.S. and are then eligible for citizenship.

Only in the Swamp can a bill handing out citizenship for sale to the highest bidders be marketed as a way to help America "compete."

Then there's the poison pill for Americans studying in science, technology, engineering or mathematics (STEM). The House bill would lift the cap on immigrant visas for foreign nationals and their entire immediate families if they have doctoral degrees in STEM fields. Silicon Valley lobbyists will claim (as they have disingenuously argued for the past three decades) that there is a catastrophic shortage of high-skilled, high-tech labor.

Here are the facts, straight from the U.S. government: "Among the 50 million employed college graduates ages 25 to 64 in 2019, 37% reported a bachelor's degree in science or engineering but only 14% worked in a STEM occupation," according to the U.S. Census Bureau's 2019 American Community Survey one-year estimates. "This translates into less than a third (28%) of STEM-educated workers actually working in a STEM job."

Other provisions of the House bill would grant amnesty and work permits to illegal aliens and refugees from Hong Kong, and "special immigrant visas" to 5,000 "high-skilled" Hong Kong residents for up to five fiscal years for a total of 25,000 new green card holders flooding the American tech workforce.

Only in the Swamp can legislation that busts open the cheap foreign labor pipeline and undermines native American STEM graduates be sold as a vehicle for increasing American competitiveness.

And that's just the tip of the iceberg. Buried in the America Competes Act is a side bill snuck in as a last-minute amendment called the College Transparency Act, which will radically expand the federal government's ability to conduct surveillance, tracking and profiling, of every college student in this country. According to The Federalist, the bill opens the door to collection of "student-related surveys, race or ethnicity, age, sex, attendance, program of study, military or veteran benefit status, enrollment and credential status, distance education enrollment status, and federal Pell Grant status." In addition, "economic status, participation in remedial coursework, status as a parent of dependent children, incarceration or confinement status, disability status, and 'other' undefined data" will be collected "as the government later deems necessary."

There would be no means to opt out of this national student database, and the bill "specifically allows third parties to sell student data." The potential for abuse and exploitation of highly personal student data that could be used for racial, psychological and ideological profiling is terrifying.

Put on your shocked faces: Bill Gates and the Gates Foundation enthusiastically champion this American social credit system penetration into college student data—just as they have lobbied for years for the other America Competes Act provisions sabotaging American workers through relentless mass migration.

Any American politician who calls himself "America First" and shills for this traitorous monstrosity should be kicked out of office. Pay attention. Raise hell. Do something.