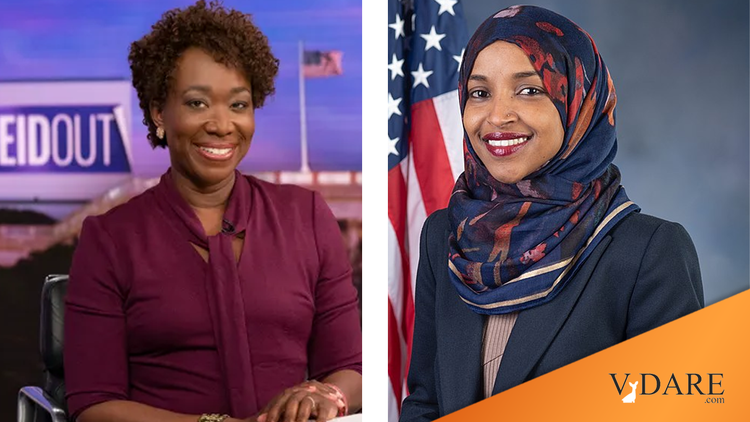 Joy Reid, Islamophobe: It's Almost as if the Democrats' Coalition of the Fringes Tends to Turn Into a Circular Firing Squad

This is from Seattle in June: pic.twitter.com/5vQbVsqR5N

Reid made the remarks on her new 7pm show ReidOut on Monday night
She compared Trump supporters to ‘radicalized’ Muslims in panel remarks
Reid was referencing Kyle Rittenhouse in Kenosha and clashes in Portland
Said Trump’s rhetoric was encouraging his supporters to violence
Rep. Ilhan Omar joined the critics in denouncing the remarks as anti-Muslim
Reid says she is victim of ‘willful distortion of the points I tried to make’

By KEITH GRIFFITH FOR DAILYMAIL.COM

MSNBC host Joy Reid has been accused of Islamophobia after comparing radicalized supporters of President Donald Trump to ‘the way Muslims act’.

Reid’s comments came on Monday during her new 7pm show, ReidOut, as she discussed the murder charges against Kyle Rittenhouse in Kenosha and political violence in Portland.

‘When leaders, let’s say in the Muslim world, talk a lot of violent talk and encourage their supporters to be willing to commit violence including on their own bodies in order to win against whoever they decide is the enemy, we in the U.S. media describe that as they are ‘radicalizing’ these people, particularly when they’re radicalizing young people,’ Reid said.

‘That’s how we talk about the way Muslims act,’ she added. ‘When you see what Donald Trump is doing, is that any different from what we describe as radicalizing people?’

Rep. Ilhan Omar, a Minnesota Democrat, led the criticism against Reid, saying in a tweet: ‘Honestly, this kinda of casual Islamophobia is hurtful and dangerous.’

How exactly is poor Joe Biden going to manage this coalition? Coming together over “White Man Bad” has worked fairly well for the Democrats during the Trump Administration, but how is this anti-white ploy going to work when the extremely white Biden is President?