Writing at Newsbusters.org, Spencer Raley takes racist black professor Brittney Cooper [email her]to task for her Salon.com column that says all whites must consider themselves the "face of the oppressor."[I could have been Sandra Bland: Black America’s terrifying truth, July 23, 2015] 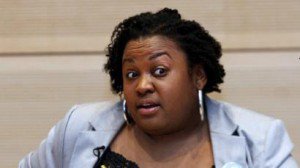 There's no need to dissect Cooper's race hatred here, except to say that if a white had written what she did, his career would be over. He would hounded from his university teaching post.(Raley actually doesn’t mention that Cooper is black, but runs her picture, right.) Rutgers allows Cooper to pretend she is a professor at Rutgers in something called "Africana Studies."

The more interesting thing is Raley. He dissects Cooper's piece, walks right up to the line, then chickens out before drawing the obvious conclusion.

Throughout this anti-white tirade from a Big Ten professor, Cooper never once suggests that other races or creeds should look in mirror for comparable actions. That would go against the creed of liberalism. The Muslim community need not answer for the killings of 5 service members in Chattanooga, or the Tsarnaev's Boston bombing. But the white community must answer for crimes committed by terrorists like Dylan Roof, or the alleged misconduct of a white police officer. This type of one-sided logic is simply standard procedure for liberals like Cooper, and liberal organizations like Salon.[ Rutgers Professor: All White People Must Consider Themselves "The Face Of The Oppressor", July 23, 2015]

Wait a minute. What do Muslims have to do with it? This is anti-white racism from a black radical who works at a major university. Islam—bad as it is—has nothing to do with it.

Here is what Raley should have written (replacing the bolded sentence):

The black community need not answer for the Pearcy or Wichita massacres, the Knoxville Horror, the knock-out game, polar bear hunting or flash-mob attacks.