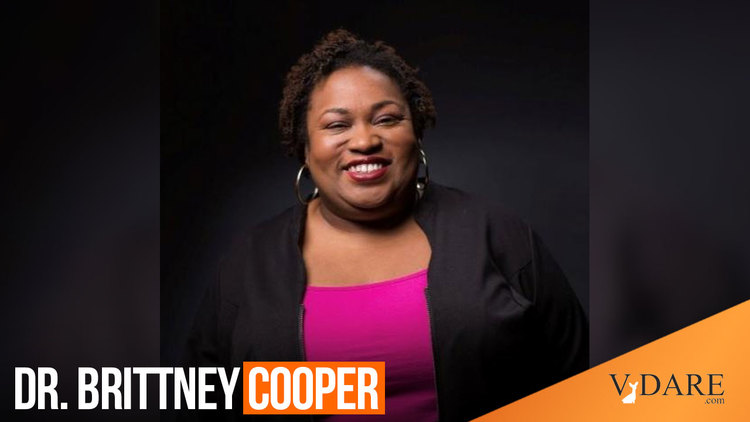 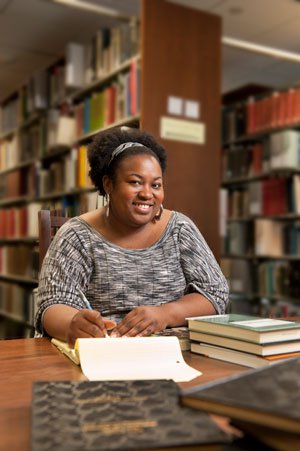 Meet Dr. Brittney Cooper, a vast shapeless mass of diabetic tissue who is an associate professor at Rutgers University, teaching Women's and Gender Studies and Africana Studies. Prof. Cooper [Email her/Tweet her] has opinions about us white people.

Here are some of them:

White human beings thought: "There's a world here and we own it." Prior to them black and brown people had been sailing across oceans, interacting with each other, for centuries without total subjugation, domination, and colonialism …

The thing I want to say to you is, we gotta take these motherfuckers out. But I know … But like … We can't say that, right? We can't say … Like … I don't believe in a project of violence, I truly don't, because I think in the end our souls suffer from that.

Those are just some random clips. There are five minutes and change altogether, if you want to hear the whole thing. It's on YouTube below:

Rutgers is a respectable public university, supported by New Jersey taxpayers; a seat of knowledge and inquiry, ranked 63 in the nation by U.S. News & World Report, fees 25 to 30 thousand dollars a year for in-state undergraduates, current endowment 1.6 billion dollars.

How on earth does an illiterate windbag like Dr. Cooper, who plainly knows nothing about human history, get to be an associate professor at Rutgers? Have we really sunk so deep into the mud?

Although come to think of it, mud would be a suitable habitat for Dr. Cooper. She'd be right at home there, wallowing in the mud along the Limpopo River with all the other hippos.

Earlier on Dr. Cooper on VDARE.com:

That last one quotes Dr. Cooper's rant (or screed) on the subject of the Ferguson fiasco:

Peaceful protests have been happening for over 100 days. But white folks only really pay attention if they fear they have something to lose. Smoke flares in their nostrils, because then they are confronted with the possibility of charred, burning, white flesh. No more water. The fire next time. [Emphasis added]

I am utterly undone: My struggle with black rage and fear after Ferguson, November 25, 2014.