Disparate Impact And Voting Rights For The Ignorant

When The Federalist's David Harsanyi wrote a Washington Post  Op Ed  entitled, “We must weed out ignorant Americans from the electorate.” , Washington Watcher blogged that David Harsanyi’s Civics Test For Voting Is Aimed At Trump Voters, But Minorities Would Be “Hardest Hit”.

Any attempt at a literacy or civic knowledge test for voting will hit blacks much harder because of their lower levels of literacy and civic knowledge. In the The Troll Booth, WSJ, May 23, 2016, James Taranto makes sort of  the same point.

Harsanyi does acknowledge one potential infirmity, nodding in his conclusion to “the ugly history of poll taxes and other prejudicial methods that Americans used to deny black citizens their equal right to vote.” He therefore allows that “any effort to improve the quality of the voting public should ensure that all races, creeds, genders and sexual orientations and people of every socioeconomic background are similarly inhibited from voting when ignorant.”

Even assuming that very large problem could somehow be solved, the idea almost certainly would not pass constitutional muster. The Constitution authorizes the disqualification from voting of only two classes of citizen: minors and felons. Such restrictions as exist today—registration, residency, identification—are ministerial or logistical in character.

In his acknowledgment of “the ugly history,” Harsanyi doesn’t mention literacy tests, to which his idea bears at least a superficial resemblance. And it is true that in Lassiter v. Northampton County (1959), the Supreme Court upheld a North Carolina literacy test “applicable to members of all races.” Justice William O. Douglas wrote: “Certainly we cannot condemn it on its face as a device unrelated to the desire of North Carolina to raise the standards for people of all races who cast the ballot.”

But Lassiter was supplanted by the Voting Rights Act of 1965, which includes a near-categorical ban on literacy tests, and it almost certainly wouldn’t be good law today. In the intervening decades the Supreme Court has evaluated restrictions on voting—including ministerial or logistical ones—under the demanding doctrine of “strict scrutiny.”

The problem is that all such restrictions hit blacks harder because of their lower IQs, the same as employment testing, and so on, and the Supreme Court has consistently held that if blacks do worse on a test, it's the test that's wrong. But Taranto doesn't mention blacks lower average IQ, and  Harsanyi simply refused to believe it, Tweeting 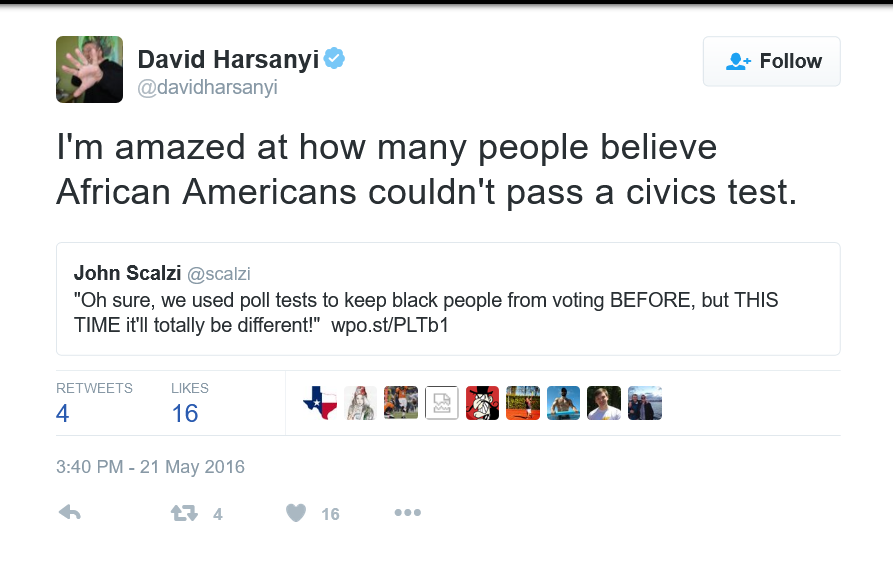 The WSJ's Taranto noted that at least one black commentator can see where it would hit hardest:

“In about 15 years we’ll be far enough away from Jim Crow that I guarantee this becomes a mainstream opinion again,” Jamelle Bouie of Slate and CBS tweeted yesterday. But the Washington Post published it. It’s mainstream opinion now. Say what you will about Donald Trump, he’s certainly succeeded in widening the range of permissible debate.

But Jamelle Bouie doesn't believe that blacks have a lower average IQ, either, as seen during the controversy over geneticist Razib Khan's getting a blogging slot at the NYT:

Wow, nice to know the New York Times is bringing on a “maybe blacks are born dumb” guy. http://t.co/sN5NEs2owL pic.twitter.com/y4CyHIyRnV

One of Khan's alleged sins—in the year 2000, he wrote us a letter disagreeing (politely) with something Steve Sailer had written.

In any event, we can absolve Harsanyi  [Email him] of "racism." Taranto says "Say what you will about Donald Trump, he’s certainly succeeded in widening the range of permissible debate" but Washington Watcher put it differently: "the Washington Post would never have dared published such an op-ed a year ago, and doing so now shows the pundit class’s growing disdain for the average American voter after defying them to vote for Trump."