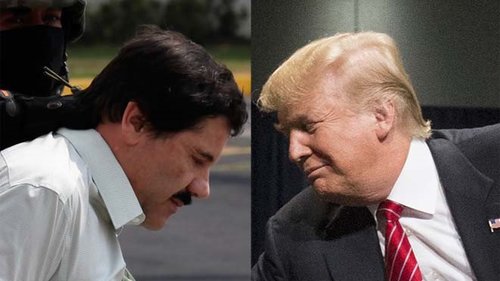 Memo From Mexico: Trump Right Again— Mexican Drug Lord “Chapo” May Be On That Path To U.S. Citizenship

It’s not just the Mexican media that’s in a tizzy about Donald Trump—so is the entire American Ruling Class, which is why the latter is so desperate to exploit Trump’s angry reaction to John McCain’s arrogant dismissal of GOP immigration patriots as “crazies” to stop him publicizing any more hatefacts about immigration. One such Trumpeted hatefact has gone unnoticed: it’s not at all impossible that Mexican drug lord Joaquin “Chapo” Guzman may finish up with American citizenship—it’s happened before.

Guzman escaped from a Mexican “maximum security” prison July 11th, via a mile-long tunnel, constructed with the collusion of at least some prison officials. By July 12th, Chapo, or somebody using his name, was already firing off tweets, including a threat against Donald Trump. Trump responded:

Outrageous? Sure, but the way our entire immigration/nationality system is currently being run is an outrage to American sovereignty.

In fact, Donald Trump’s statement not at all outside the realm of possibility. 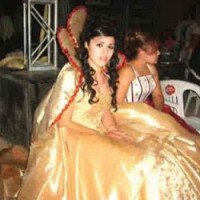 Already, Guzman’s current wife, twenty-five year old beauty queen Emma Coronel (right, with wings) is a dual citizen of Mexico and the U.S. She was born in the U.S. and is also the daughter of a U.S. citizen mother [Who Is Emma Coronel? 5 Things To Know About 'El Chapo' Guzman's Beauty Queen Wife, By Oscar Lopez, LatinTimes.com, Feb 24 2014]

queen (Laura Zuniga, right) are sometimes confused with hers, but this website straightens out the confusion).

Emma herself hails from a drug trafficking family: she is the niece of Ignacio “Nacho” Coronel, responsible for the introduction of Mexican meth to the U.S. Uncle Nacho was killed in 2010 in a shootout with the Mexican Army [Escaped Mexican drug lord’s beauty queen wife may be key to tracking him down, By Andrew O’Reilly, Fox News Latino, July 14, 2015

Chapo and Emma have twin daughters born in 2011. And get this, the twin girls were born at Antelope Valley Hospital in Lancaster, California. The space on the birth certificates designating the twins’ father was left blank, presumably not to attract much attention. Reportedly, U.S. authorities were aware of the whole process [Beauty queen wife of Mexico's most wanted drugs lord crosses border to give birth to twins in California, Daily Mail, September 28, 2011]

Chapo is said to have insisted the twins be born in the U.S. Of course, they would be considered U.S. citizens anyway, by dint of being children of a U.S. citizen. But maybe registering them at a U.S. consulate in Mexico would have attracted more attention than just having them delivered in California.

Not only are Chapo’s wife and daughters U.S. citizens—Chapo himself obtained a California driver’s license in 1988, while residing in Southern California. Guzman’s license is under the pseudonym of “Max Aragon”, and he used it to register two Corvette automobiles which were later given to public security officials (as bribes, presumably) in Mexico. [EU dio a “El Chapo” licencia de conducir, El Universal, Nov. 4, 2013]: 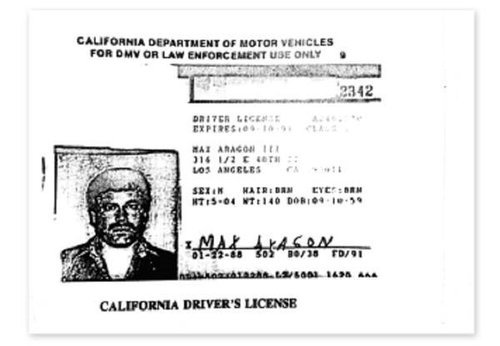 Guzman was already a wanted criminal (by the DEA) when he obtained the license [El Chapo Guzman Has California Driver's License; How Did He Obtain It? By Armando Tinoco, LatinTimes.com, November 4 2013.]

So now it’s even easier for future Chapo Guzmans to register for driver’s licenses. Out of the quarter million illegals who’ve registered thus far, how many are gang members?

It just makes you proud to be an American, doesn’t it?

And when you consider that the Obama Regime releases tens of thousands of criminal aliens on U.S. territory every year, then the Chapo thing doesn’t seem so unbelievable. Chapo might actually be preferable to some of the others on the loose.

Really, how much of a background check is any sort of Amnesty going to include?

For one thing, Spanish-speaking countries have a different surname system. There are two, one from the father (the apellido paterno) and the other from the mother (the apellido materno). Obviously, this permits all sorts of fraud, especially because most Americans are clueless about it.

The Mexican elite wants to unload these people on us—they’re not going to disqualify anybody!

Maybe it’s a stretch to think that someone as notorious as Chapo Guzman could become a citizen. (Wanna bet?).

But there is nothing in today’s immigration law enforcement to stop others of his ilk from entering the U.S. and slipping past whatever Amnesties the Democrats (and John McCain) can fix up.

Plus, with all the dual citizens, anchor babies, etc., there have to be plenty of family members here already who can bring in their drug lord relatives via the “family reunification” racket.

Donald Trump is right (again): our leaders just can’t say no to the demands of illegal aliens—and their American enablers.