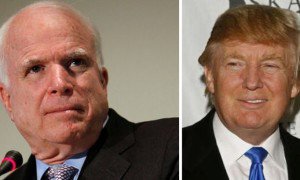 Is Donald Trump Surfacing The Long-Rumored HateFact That John McCain Was Not A Hero, But A Collaborator?

It should by now be clear to the dimmest member of America's Ruling Class that, when attacked,  Donald Trump defends himself. John McCain is not exempt.  Currently there's much MSM, and therefore Establishment GOP, harrumphing because Trump is uncowed by McCain's much-touted war record:

"He's not a war hero," Trump said. Sarcastically, Trump quipped, "He's a war hero because he was captured." Then, he added, "I like people that weren't captured"

...Republican leaders and other candidates have been careful in how they respond to his immigration remarks, but his condemnation of McCain opened the floodgates, drawing swift and sharp criticism from other Republicans.

Former Texas governor Rick Perry, himself a subject of recent attacks from Trump, said Trump was "unfit" to serve as president and should "immediately withdraw" from the race...Jeb Bush, the former Florida governor, also chimed in with a Twitter post calling or an end to such "slanderous attacks"...

Wisconsin Gov. Scott Walker, campaigning in Western Iowa, denounced Trump's remarks and said McCain is "undoubtedly an American hero." This is a change in tune for Walker, who on Friday refused to speak ill of Trump over his immigration comments...

Sen. Ted Cruz (R-Tex.), who has been perhaps the loudest defender of Trump's remarks about immigrants and met privately with Trump a few days ago in New York, has been silent, so far, about Trump's comments on McCain's war service.

Trump slams McCain for being ‘captured’ in Vietnam; other Republicans quickly condemn him, by Philip Rucker, Washington Post, July 18 2015

In fact, however, it has long been common gossip in Washington DC that there is something suspect about McCain's record as a POW in North Vietnam. I wrote about this back in 2008 (see also here) and in 2010 we cross-posted (with VDARE. com's trademark supporting hyperlinks) Ron Unz's long discussion in The American Conservative, which drew heavily on former New York Times' reporter Sydney Schanberg's expose in The Nation.

Briefly, the allegation is that McCain was not a hero, but a collaborator.

Is this, like immigrant crime, another "Hatefact" that Donald Trump is forcing a reluctant Ruling Class to notice?