McDaniel vs. Cochran In Mississippi: Who Is The Better Immigration Patriot? 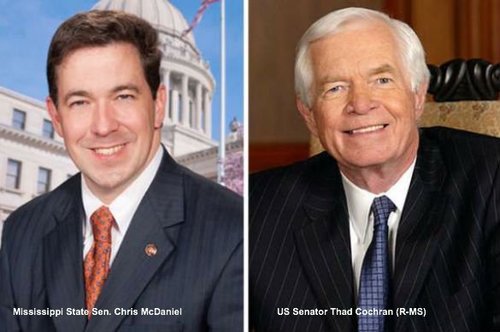 Chris McDaniel, a Mississippi State Senator, is challenging incumbent U.S. Senator Thad Cochran  (R-MS) in a June 3 primary election that will determine who’ll occupy that seat in the next three Congresses. (The Democrats have a negligible chance of winning the seat in the fall election.)

McDaniel was elected to Mississippi’s state senate in November, 2007 and cosponsored SB 2988 [PDF], a strong E-Verify bill [PDF; see pp. 4 - 5] which was introduced on February 4, 2008, quickly passed by huge margins in both chambers, and signed into law by their governor that March 17.

Now in his second term, the 41-year-old McDaniel was heartily endorsed for the U.S. Senate by the redoubtable Laura Ingraham, when she interviewed him on her radio show in late April. You can listen here—the entire-10-minute clip focuses on immigration policy, and Ingraham introduces McDaniel at about five minutes in, saying, “He is probably the closest thing to [Senator] Jeff Sessions that I’ve come across.”

What about the 77-year-old Cochran? He was first elected to Congress in 1973, then was elected to the Senate in 1978, and is now finishing his sixth term there. Judging by his record (going back to 1989, the limit of NumbersUSA’s compilation), Cochran hasn’t paid consistent attention to immigration policy, although his campaign website says, in part:

Thad has consistently voted against inadequate immigration legislation. He even voted against his friend Ronald Reagan’s amnesty bill in 1986. In fact, he is one of three Senators in history to vote against every comprehensive immigration reform bill that sought to provide amnesty to those who have entered our country illegally (1986, 2006, 2007, 2013). Thad has voted against all legislation that would allow a process to grant legal status to illegal immigrants now in the United States.

But Cochran’s “career” grade (i.e. from 1989 to now) with NumbersUSA is C-plus, which is below the career grades of 63% of all Republican U.S. senators, past and current, who have served since 1989.

The characters on each side of this battle are perfect for the political theater showdown: Tea Party-backed state Sen. Chris McDaniel is a conservative underdog in the mold of [Texas’s Senator Ted] Cruz, [Utah’s Senator Mike] Lee, or [Kentucky’s Senator Rand] Paul, who has similarly embraced the grassroots with a tinge of his own southern brand of political flare. Thad Cochran, the longtime GOP senator from Mississippi, is seeking a seventh term in the U.S. Senate after 42 years in Congress, proudly feeding taxpayer dollars back to Mississippi throughout most of it.

[T]he millions pouring in from both sides of the national GOP war—the Chamber of Commerce and Haley Barbour’s clients for Cochran, and the Club For Growth, Citizens United and Tea Party groups for McDaniel—and no lack of national political talent on the ground, seem to suggest this is not just a 2014 battlefield. It’s the 2014 battlefield.

So … who’s on first? Well, at VDARE.com, we don’t make endorsements. But we know how to think about immigration in the national interest, so I’ll lay out the comparison between these two candidates.

In its grading of Congress’s members, one NumbersUSA category is ‘challenging the status quo,’ as explained at its site:

The "Challenge Status Quo" grade is based on whether a Member attempts to challenge the status quo of each key immigration policy problem or chooses to ignore one or more of them. In most Congresses, it is possible for Members to just avoid doing anything about several immigration problems. Those who run Congress tend to 'protect' Members from having to cast a vote on immigration bills and amendments.

Thus, Members who do act in all the key immigration categories—and do so positively—are showing excellent overall leadership and get a high grade in this Leadership Subject. Members also earn positive points in this category by authoring (not simply co-sponsoring) reduction bills and by providing special leadership on committees and caucuses. … This grade recognizes that simply avoiding taking negative actions is not enough because doing nothing at all is a support for the status quo. And status quo immigration policies monthly are adding large numbers of foreign competitors to unemployed Americans who are searching for jobs. The status quo policies also are adding millions of people each decade to the overloaded physical, social and environmental infrastructures of American communities. …

To examine Senator Cochran’s performance from several years before NumbersUSA’s scoring begins, I went back to the Congressional Record for October 17, 1986, the day the Senate passed the final version of the completely disastrous IRCA amnesty, the seed for many of our current immigration woes. (That’s volume 132, part 23 of the Congressional Record. Debate on the IRCA bill, S. 1200, takes up most of pp. 33,208 - 33,245; votes are on pp. 33,181 and 33,245.)

Just as his campaign website says, Cochran voted against IRCA both times. But what did he contribute to the extensive debate? Not a peep. He’s been mentioned 4 times on VDARE.com in 14 years.

In contrast, several of Cochran’s colleagues voiced prescient objections to the bill. For example, Senator Pete Domenici (R-NM), whose mother had been an illegal alien from Italy, said [p. 33,224]:

I do not think this bill will work…Frankly, I believe we are creating an administrative nightmare…I believe we are going to have a situation where our enforcement people will literally be besieged. There will be an invitation to fraud and abuse the likes of which we have not seen…I predict that this will not be the last amnesty. We will have a new one because this just will not work. Consequently, in 8 or 9 years we will have another of those serious social problems that come from this…

Senator James McClure (R-ID) and Senator Phil Gramm (R-TX) also spoke at length [pp. 33,220 - 33,222 and pp. 33,213 to 33,218 , respectively] about problems with the bill, including the unfairness of Amnesty to those on the waiting list for legal immigration and the foreseeable tsunami of fraudulent documents that would be spurred by the amnesty.

Was Cochran’s non-appearance in the debate over IRCA a matter of being properly silent because he was low on the seniority list? Probably not: At the time, Gramm had been in the Senate less than two years while Cochran had been there since late 1978.

Further, one sentence from Cochran’s campaign website, quoted above— “Thad has voted against all legislation that would allow a process to grant legal status to illegal immigrants now in the United States.”—requires some discussion: In each of three Congresses—2001 to 2002, 2003 to 2004, and 2005 to 2006—Senator Cochran cosponsored the AgJOBS bill, a mass Amnesty for illegal aliens working in agriculture, introduced by Senator Larry Craig (R-ID).

But then when the 2005 - 2006 AgJOBS bill was proposed as an amendment to an Iraq-war supplemental spending bill, Senator Cochran’s vote helped defeat that move.

(For documentation on these AgJOBS points, go here and click on “Show Actions” below “Reduce Amnesty Enticements.” Then scroll way down!)

Based upon the evidence of Senator Cochran’s actions—and inaction—on immigration, I think it’s fair to suggest that he doesn’t think about the subject much and that, at a deep level, he doesn’t understand what’s at stake for the country in this arena.

In contrast, Cochran’s challenger McDaniel has quite a bit to say about immigration, and what he says suggests that he’s knowledgeable—that his interest is more than casual.

Here’s the statement about immigration at McDaniel’s campaign website:

[The American Dream] is made possible by our country’s long-standing respect for the rule of law and basic fairness. Amnesty rewards those who willfully break American laws and unfairly penalizes those who follow the rules and wait their turn to enter this great country.

Chris opposes amnesty and believes we most enforce the laws on the books and secure our border first and foremost. As a state senator, Chris introduced the Employment Protection Act to require all companies to use the Internet-based system to check the legal status of potential employees. This legislation was passed and signed into law.

That Senator McDaniel was proud of 2008’s Employment Protection Act (i.e. SB 2988, which I mentioned above) is evident from his highlighting of it in a “Weekly Legislative Report” he posted ten months later. That report also heralded several further immigration-enforcement measures that McDaniel was then pushing. (Unfortunately, none of these seem to have become law).

McDaniel has also been explicit about immigration policy during the current campaign, at least when he’s been asked. In his interview with Laura Ingraham, McDaniel said: “It’s time for us to focus on the American worker for a change, the condition of American workers. What we’ve seen over the last many years is wage stagnation, growth in welfare programs, shrinking workforce participation.”

Ingraham played for McDaniel the sound clip of the appalling Tom Donohue, [Email him] President of the U.S. Chamber of Commerce, saying: “We can’t harvest our food, care for our sick, or sustain our military without immigrants and temporary workers.”

McDaniel’s response: “What he’s really saying is he needs more cheap labor, basically, and I disagree with that completely.”

McDaniel added that, if elected, he’ll look to Senator Sessions for leadership on this.

McDaniel was one of the first candidates, of about 60 (so far) across the country, to answer FAIR’s three-part questionnaire on immigration policy:

McDaniel’s answer to each question: “Oppose.”

McDaniel was also in the news a few days ago for his opposition to granting amnesty to illegal-alien minors [“DREAMers”] who enlist in the military—a long-time Trojan Horse project of House Majority Leader Eric Cantor, currently shamelessly trying to lie his way past a primary challenge from immigration patriot Dave Brat.

So there you have it. VDARE.com reports. Mississippi’s Republican primary voters get to decide.

Paul Nachman [email him] is a retired physicist and immigration sanity activist in Bozeman, MT.