Omar Khadr And Justice—Guess Which Side President Obama's On. 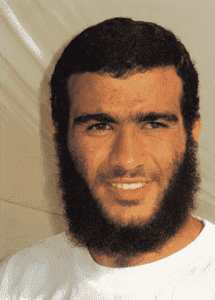 Behold Canada and America. One country supports the efforts of a U.S. Special Forces soldier's widow to hold accountable the jihadist who killed her husband and the father of her two young children. The other country helped free that jihadist from Guantanamo Bay in a shady deal that appeased his far-left allies.

Guess which side President Obama's on.

The widow is Tabitha Speer. Her children are Taryn and Tanner. Their husband and father was an American hero: Sergeant First Class Christopher Speer, a 28-year-old medic with the U.S. Special Forces. As I reported in my syndicated column 11 years ago, Speer died in Afghanistan during an ambush by al-Qaida operatives. The remorseless Islamic zealot who lobbed the fatal grenade that killed Speer in 2002: 15-year-old Omar Khadr.

Bleeding-heart activists painted Khadr as a brainwashed "child" soldier—while ignoring Speer's then 3-year-old daughter and 11-month-old son left fatherless in the name of Allah. Khadr knew exactly what he was doing: targeting Americans for murder. Sergeant First Class Layne Morris of South Jordan, Utah, was there. He lost his right eye in the ambush and said after the attack: "That was a trained al-Qaida who wanted to make his last act on Earth the killing of an American."

The FBI called Khadr, who was detained at Gitmo in November 2002, "cold and callous." Terrorist videos showed the teen smiling as he rigged explosives in preparation for the fight. The thought of killing our soldiers brightened his day, he said. One of his leaders exulted on tape as they readied their bombs and grenades: "Allah willing, we will get a good number of Americans."

Confused, innocent "child" of upstanding peace-seekers? Bull. Following Khadr's capture, I should remind you, his sister said the death of Speer was no "big deal". His mother declared she would rather see her sons at al-Qaida training camps than "be on drugs or having some homosexual relation." One brother openly admitted: "We are an al-Qaida family." And another brother stated: "Every Muslim dreams of being a shahid (martyr) for Islam."

Last week, as politicians paid lip service to honoring those who have served and sacrificed, Tabitha Speer and Morris were doing what they could to uphold honor and fight for real justice for the fallen. They filed a civil suit against Canadian-born Khadr, who had pleaded guilty, guilty, guilty, guilty and guilty in 2010 to five war crimes including murder and attempted murder related to the ambush in Afghanistan.

There is a precedent for such courtroom accountability: Mrs. Speer and Morris successfully sued the estate of Khadr's jihadi father and al-Qaida financier Ahmed Said Khadr. The terrorist patriarch died in a gun battle near the Pakistan-Afghanistan border in 2003, so a jury's $100 million civil award to Khadr's victims has never been collected.

But it did send a message. When necessary, American civilians will do the job their leaders won't do: pursue jihadist murderers whenever and wherever they can, and keep the legacies of our heroes in uniform alive. The new suit comes as coddled leftwing cause célèbreOmar Khadr, now 27, prepares to sue the Canadian government for $20 million in civil rights damages.

The conservative Canadian government lent its public support to the Speer family and to Morris on the eve of Memorial Day weekend. "Our government supports the efforts of Tabitha Speer and fellow soldiers to receive compensation for their horrible loss." Good for them.

How about America's leaders? AWOL. The reason Khadr is in Canada, in case you didn't know, is that Obama freed Khadr from Gitmo after intense lobbying from the "compassionate" social justice crowd. He was repatriated to Canada just weeks before America's November 2012 election. Leading the pressure campaign on Obama: the Center for Constitutional Rights, which also crusaded for the release of former Gitmo jihadist Abu Sufian bin Qumu, a primary suspect in the Benghazi consulate attacks.

Canadian conservative writer and activist Ezra Levant, who has advocated tirelessly for the Speers and for other victims of jihad, noted recently that the liberal Canadian press has mentioned the Speer children a scant six times as Khadr milks leftist sympathies.

But what does it say when the Canadian government shows more compassion for the fatherless children of a U.S. soldier than their own government? A search for the Speer children on the White House website yielded: "No results."