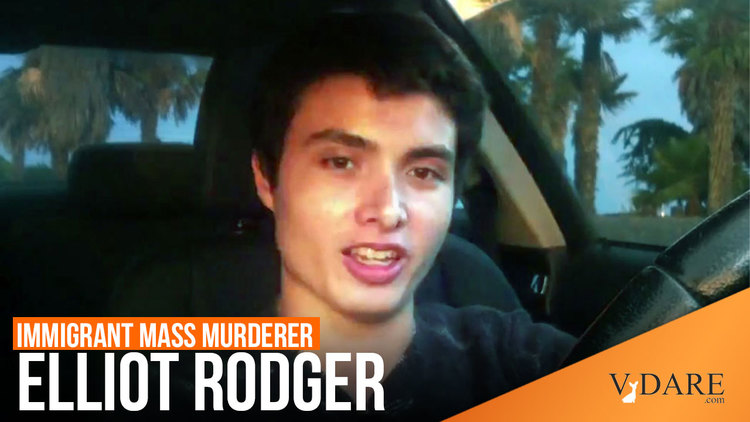 Mass murder at a sunny college campus in a beach town would normally be considered “newsy,” but Elliot Rodger’s massacre at the University of California-Santa Barbara last Friday is getting surprisingly little press.

This is not a good case for liberals: The killer was an immigrant, a person of color, and the majority of his casualties resulted from attacks with a car or knife. It makes as much sense to rant about the NRA as to blame the Auto Club of America or the National Knife Collectors Association.

Rather, what we have is yet another mass murder committed by a schizophrenic—just like those of Seung-Hui Cho, Jared Loughner, James Holmes and Adam Lanza.

Yes, they all used guns. Also, they were all males. They were all college-aged. They all had hair. Those are not distinctive characteristics.

When the last five mass murderers share something that only 1 percent of the population has, I think we’ve found the relevant common denominator.

Rodger had been seeing therapists since he was 8 years old. Just last year, his psychiatrist, Dr. Charles Sophy, prescribed him Risperidone, an anti-psychotic. But after looking up what Risperidone was for—schizophrenia—Rodger decided “it was the absolute wrong thing for me to take” and never did.

See, that’s the thing about schizophrenics—they don’t think they’re sick. They think the lava lamp that’s talking to them is sick.

Rodger’s “manifesto” reads like Nikolai Gogol’s “Diary of a Madman“—generally recognized as the first description of schizophrenia, except it’s a little repetitive and not well-written, no matter what that “tech guru” says.

I’m one of the few who have read all 141 pages. It is a tale of increasing delusions, paranoia, hallucinations and wild, grandiose self-assessments. In other words, it is a slightly less whiny version of Obama’s first inaugural address. (How many pages does your manifesto have to be before we can force you to take your medication?)

Rodger says of himself:

Rodger saw every female as a “tall, hot blonde”—and, this being California, that’s at a campus that’s only 50 percent white. He viewed all couples as his sworn enemies causing his suffering.

Although Rodger loved driving his car, he “soon learned the hard way” not to drive on Friday and Saturday nights, where he “frequently saw bands of teenagers roaming the streets.” They “had pretty girls beside them,” probably on their way to “get drunk and have sex and do all sorts of fun pleasurable things that I’ve never had the chance to do. Damn them all!”

At Santa Barbara City College, he dropped his sociology class on the first day of school “because there was this extremely hot blonde girl in the class with her brute of a boyfriend.” Rodger couldn’t even sit through the whole first class with them, merely for being a couple.

Santa Monica Pier was out for him, too: “I saw young couples everywhere. … Life was too unfair to me.” On a trip to England, he refused to leave his hotel room so he wouldn’t have to see men walking with their girlfriends.

The “cruelty” of women apparently consisted of the failure of any “tall, hot blondes” to approach Rodger and ask for sex. He would walk around for hours “in the desperate hope that I might possibly cross paths with some pretty girl who would be attracted to me.”

But only once, in the entire 141-page manifesto, does Rodger attempt to speak to a girl himself. She’s a total stranger walking past him on a bridge, and he musters up the courage to say “hi.” He claims she “kept on walking” and said nothing. She probably didn’t hear him. But he called her a “foul bitch” and went to a bathroom to cry for an hour.

Although Rodger repeatedly denounces the world and everyone in it for “cruelty and injustice,” he was the bully more often than the bullied, especially as time went on, and shis rage increased.

He sees an Asian guy talking to a white girl at a party, decides he’d been “insulted enough,” and roughly bumped the Asian aside. “How could an ugly Asian attract the attention of a white girl, while a beautiful Eurasian like myself never had any attention from them? I thought with rage.”

Even after this unprovoked assault, the couple was nice to him, telling him he was drunk and should have some water. He stormed out of the party, but returned to “spitefully insult” the Asian.

Then he climbed up on a balcony at the party, and when some college kids joined him, he began insulting them and tried to push the girls off a 10-foot ledge.

He hectors his mother to marry “any wealthy man” because it would “be a way out of my miserable and insignificant life.” He tells her “she should sacrifice her well-being for the sake of my happiness.”

When flying first class, he says, “I took great satisfaction as I passed by all of the other people who flew economy, giving all of the younger passengers a cocky little smirk whenever they looked at me.”

Meanwhile, in 141 pages, the worst thing anyone ever did to him was not say “hi” back.

His claims that couples all over were “making out” or “passionately kissing” are probably hallucinatory. In the Starbucks line? At family dinners? They were probably holding hands and Rodger hallucinated something resembling a live sex act.

Thus, he writes a couple in a Starbucks line were “kissing passionately … rubbing their bodies together and tongue kissing in front of everyone.” Livid, Rodger followed them to their car and threw his hot coffee on them. Utterly self-pitying, he says: “I cursed the world for condemning me to such suffering.” Then he spent five days alone in his room.

Another couple Rodger says were kissing “passionately” in the food court outside Domino’s pizza enraged him so much he followed them in his car and “splashed my iced tea all over them”—to fight “against the injustice.”

But the story that sounds the most like Gogol’s Poprishchin hearing two dogs talking in Russian is Rodger’s allegation that his stepmother bragged to him that his stepbrother, Jazz—her own 6-year-old son!—”would be a success with girls and probably lose his virginity early.”

I know Moroccan cultural mores are different, but I’m calling “auditory hallucination” on that one.

A family friend, Simon Astaire, described Rodger’s flat affect, common to schizophrenics, saying he “couldn’t look at you straight in the eye and looked at your feet. It was unbearable.”

It’s hard to feel sorry for a mass murderer, but it was cruel to Elliot Rodger to allow him to refuse medication and turn himself into a monster. It was beyond cruel to his innocent victims—as well as the other victims of psychopathic killers. But liberals are more worried about “stigmatizing” the mentally ill than the occasional mass murder.