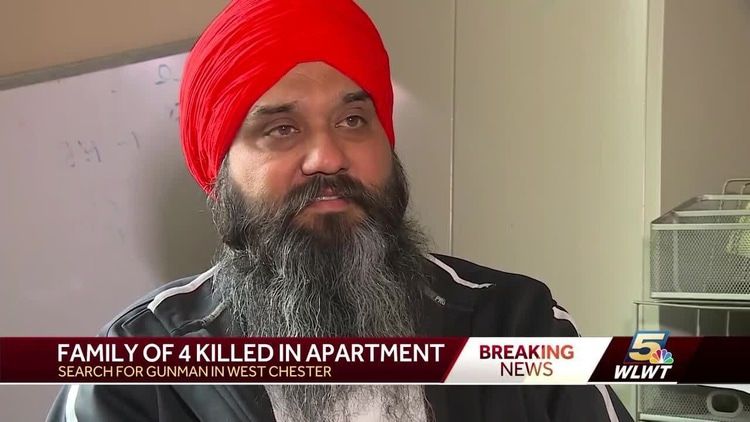 As usual in these cases, the report of the murder allows the victims to have a racial identifier ("Sikh family") but the alleged killer (truck driver Gurpreet Singh) has non—even though it’s one of those cases where the accused is charged with wiping out his family, so they’re all members of the same group:

West Chester police have made an arrest in connection to the April shooting that killed four members of a Sikh family.

Gurpreet Singh, 37, is charged with four counts of aggravated murder in the killing of four members of his family.

You see how this works: the writer could have said, just as easily, that a Sikh was charged with killing four members of a West Chester family, but that never happens.

Shalinder Kaur, 39, her parents, Hakiakat Singh Panag, 59, and Parmjit Kaur, 62, and her sister Amarjit Kaur, 58, were found dead with food burning on the stove.

It was Gurpreet Singh, Shalinder Kaur's husband, who found the bodies and made a frantic 911 call, often leaving his phone to beg for help from his neighbors.

As is also frequently the case, the accused husband said some other person or persons unknown had done it, so there was the suspicion that it might be a “hate crime”, but local police, who tend to be more level-headed in cases like this than the media, said it wasn’t.

The incident drew international attention. One of the victims was an Indian national, and the other three were of Indian origin.

Until the arrest on Tuesday, West Chester authorities were tight-lipped about the investigation. Two days after the killings, a dive team with the Ohio Bureau of Criminal Investigation recovered a gun from a pond near the scene of the crime.

Within days of the slayings, authorities said no evidence suggested that the killings were hate crimes.

They’re not “hate crimes” because the alleged killer was the same race as the victims. If he’d been white, that would have been a big story. When six Sikhs were killed by a white guy (clearly described as such by the media) it was national news, and Michelle Obama visited the victims.

If he’d been black, it would be a much smaller story. At the time, I pointed out that since Sikhs frequently run convenience stores, anti-Sikh violence tends to be committed by black youths.

In this case, since a Sikh did it, it is officially Not A Story.

“I hope the truth comes out and we get an answer to the question of why this happened or had to happen," said Satinder Bharaj, past president of the gurudwara, the temple where the family worshipped. “If it is him, (Gurpreet) it is in no reflection of the Sikh community but the work of one person and as such should not reflect negatively on the Sikh Community in Cincinnati or the US or all over." [Emphasis added.]

One of the family was a recent immigrant:

“I am not surprised at Gurpreet’s arrest. I expected it," he said." We knew there were disputes in the family and we expected fist fights or a divorce but we never expected the whole family to be killed.".

He said he was close to Amarjit Kaur.

"I sponsored her. I went to pick her up in March from India," he said. "I feel so much grief. I still cannot believe she is gone. Her death lies heavy on my heart. It’s painful to see a family member do this to other family members.

That was a 58-year-old woman, who would still be alive if she hadn't moved to America. She had to be sponsored, because she was never going to earn any money in America, and she was only 7 years from retirement.

The Trump Administration wants to end these visas, which, if can be done, might save some lives.