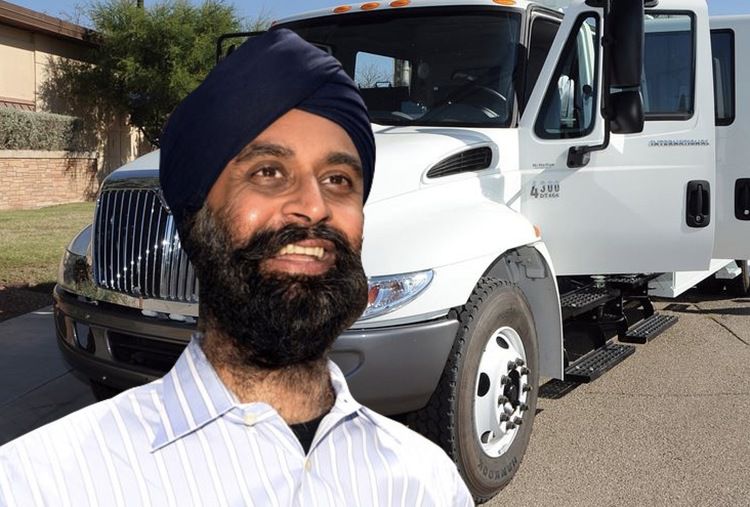 The LA Times has definitely drunk deep from the Diversity delusion, believing it to be the source of virtue and the cure for evil. Too bad.

Often the Times promotes Hispanics as being superior to crass, meanie Americans who built the country that the world is invading by the thousands daily.

But on Saturday, the Tribe of the Day was Sikh who, according to the Times, are “transforming” the US trucking industry. Say, did American truckers ask to be replaced by foreigners and have their business transformed?

Below, immigrants now drive on the “Punjabi American highway” according to the LA Times. 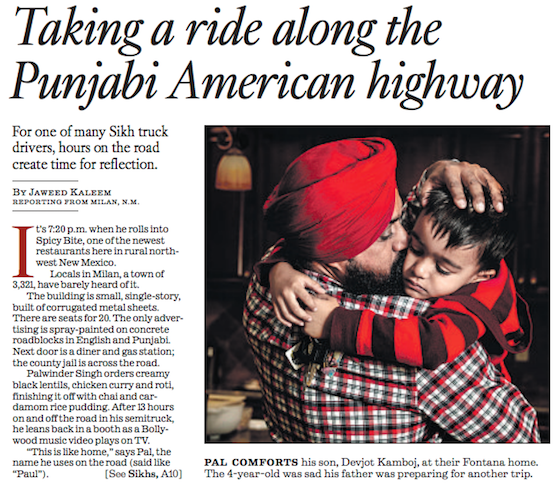 The paper even included a video online with a kid for extra emotional effect.

For a little history, American truckers have been celebrated in music and film for decades. In 1978, Sam Peckinpah directed the popular film Convoy, starring Kris Kristopherson, back when long-haul truckers were in the news for using CB radios.

In 1974, Johnny Cash wrote and recorded “All I Do Is Drive,” a song dedicated to hard-working truckers:

Plus, America certainly doesn’t need to import diverse truck drivers when self-driving vehicles are high on industry’s to-do list of automation. Driverless big rigs have been tested on highways for the last couple years, and recently the state of Florida approved a plan where more advanced vehicles could be on the road next year. The Starsky company intends to have remote drivers logging on to computers in an office environment to handle its trucks during the first and last miles of their trips by the end of 2020.

But the Times prefers its diversity fairy tale rather than facing America’s automated future.

It’s 7:20 p.m. when he rolls into Spicy Bite, one of the newest restaurants here in rural northwest New Mexico.

The building is small, single-story, built of corrugated metal sheets. There are seats for 20. The only advertising is spray-painted on concrete roadblocks in English and Punjabi. Next door is a diner and gas station; the county jail is across the road.

Palwinder Singh orders creamy black lentils, chicken curry and roti, finishing it off with chai and cardamom rice pudding. After 13 hours on and off the road in his semi truck, he leans back in a booth as a Bollywood music video plays on TV.

There are 3.5 million truckers in the United States. California has 138,000, the second-most after Texas. Nearly half of those in California are immigrants, most from Mexico or Central America. But as drivers age toward retirement — the average American trucker is 55 — and a shortage grows, Sikh immigrants and their kids are increasingly taking up the job.

Estimates of the number of Sikh truckers vary. In California alone, tens of thousands of truckers trace their heritage to India. The state is home to half of the Sikhs in the U.S. — members of a monotheistic faith with origins in 15th century India whose followers are best recognized by the uncut hair and turbans many men wear. At Sikh temples in Sacramento, Fresno, Bakersfield and Riverside, the majority of worshipers are truck drivers and their families.

Over the last decade, Indian Americans have launched trucking schools, truck companies, truck washes, trucker temples and no-frills Indian restaurants modeled after truck stops back home, where Sikhs from the state of Punjab dominate the industry.

“You used to see a guy with a turban and you would get excited,” says Pal, who is in his 15th year of trucking. “Today, you go to some stops and can convince yourself you are in India.”

Three interstates — the I-5, I-80 and I-10 — are dotted with Indian-American-owned businesses catering to truckers. They start to appear as you drive east from Los Angeles, Reno and Phoenix, and often have the words “Bombay,” “Indian” or “Punjabi” on their storefront signs. But many, with names like Jay Bros (in Overton, Neb.) and Antelope Truck Stop Pronghorn (in Burns, Wyo.) are anonymous dots on a map unless you’re one of the many Sikhs who have memorized them as a road map to America.

The best-known are along Interstate 40, which stretches from Barstow to North Carolina. The road, much of it alongside Historic Route 66, forms the backbone of the Sikh trucking world. (Continues)