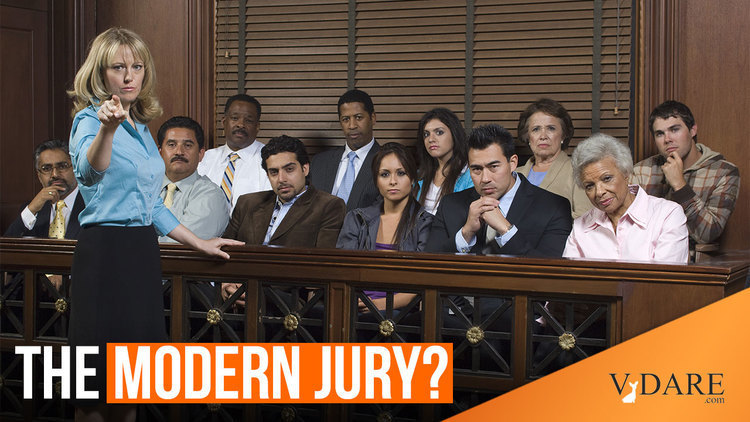 While we often discuss how much immigration and race contribute to crime, we only rarely consider their effect on our system of criminal justice. [VDARE.com Note: But see the work of the equally anonymous "Anonymous Attorney" on VDARE.com] It is a question that did not occur to me until recently when I had the opportunity to serve on an American grand jury.

The grand jury is one of the least understood features of our legal system—even though the practice dates back to medieval England. Indeed, despite the popularity of the American courtroom drama, I know of not a single film or television show that has ever depicted a grand jury in action.

Briefly, a typical grand jury consists of 16 to 23 citizens who serve for three hours a day over several weeks. Their civic duty is to indict or dismiss capital crimes and felonies, and basically act as a check on the enormous power of the government to prosecute its citizens.

Here's how it works: A prosecutor enters the grand jury room and informs the jurors of the indictments he seeks against an accused person. He then calls in witnesses one-by-one and questions them about the alleged crime. (This can include the defendant, if he chooses to testify).

Individual jurors are then allowed to submit questions to the prosecutor who repeats them aloud for the witness. When the entire testimony is over, the prosecutor informs the jurors of how the law applies to the case, then leaves the room. The grand jurors deliberate in secret, then vote.

A grand jury is distinct from a trial jury in that it only charges individuals with crimes. Once indicted, the defendant then receives a jury trial to determine his guilt or innocence…at least in theory.

"Remember, this is not a trial," prosecutors kept reminding us. That idea lets grand jurors off the hook quite a bit. It gives jurors the sense that, "Well, this isn't a conviction, just a charge, so the rest gets sorted out during the trial."

The prosecutors never told us that most grand jury indictments actually end in a plea bargain—and this includes 95% of federal indictments. A grand jury trial, therefore, is the closest thing many defendants will ever have to a genuine jury trial.

Moreover, the burden of proof for a grand jury indictment is only "probable cause", which is certainly lower than the trial standard of "beyond a reasonable doubt."

There is no judge present during grand jury proceedings, and the prosecutor remains the sole legal authority for the jurors. In fact, in the federal grand jury, a defendant cannot even have an attorney present while testifying.

Many state grand juries, however, do allow defendants to testify with an attorney present and even to call witnesses to testify on their behalf. But on both the state and federal level, the defense cannot cross examine witnesses. Worse, all grand jury proceedings deny a defendant his constitutional right to face his accuser.

As for the composition of the grand jury, the standard policy of most court jurisdictions is to make grand juries as ethnically diverse as possible.

In other words, grand jury service is a form of forced integration. The vast majority of people have never spent a day, never mind several weeks, closely cooperating with people of different races. But I served on a jury that consisted of a handful of whites like myself, and a mixture of blacks, Hispanics, and Asians, including several immigrants—a modern day jury of my "peers".

The damage immigration has done to our justice system is most obvious during witness testimony. We heard immigrant witnesses testify in several languages, including Spanish, Turkish, Portuguese, and Haitian Creole.

The difficulty is that it is nearly impossible to gauge the authenticity of a witness when he testifies through a court-certified interpreter. It's like relying on a story second-hand. Even the prosecutors seemed to struggle with this problem.

Sound confusing? It was. And boring, very boring.

It is obviously important to pay attention during court testimony because someone's liberty is at stake. But most every juror yawns through testimony translated by an interpreter. One black juror never looked up from his Gameboy every time an immigrant witness testified through an interpreter.

Things didn't get much better during jury deliberations, because some of the grand jurors spoke such poor English. Many of us simply could not understand some of the arguments the immigrant jurors were trying to make.

They also demonstrated a poor grasp of the American legal system. For example, I had to explain the concepts of "innocent until proven guilty" and "burden of proof" to one Latino woman several times. But she was flummoxed by the difference between "probable cause" and "beyond a reasonable doubt".

"What do you mean, probable?" the woman kept saying. "He looks guilty to me."

Don't get me wrong. The immigrant jurors all seemed like nice people. But even when I did understand them, it was often clear that they did not really comprehend the facts of the case they had just heard. One Chinese juror never said a single word during the entire grand jury session. He also resisted my attempts to engage him in conversation so I was never able to verify his English competency.

On the other hand, my experience with American black jurors was notably positive. Perhaps surprisingly. I was aware of the notorious reluctance of black jurors to convict black defendants, no matter the strength of the case, and even if the arresting officer is black. So, during deliberations, whenever any black juror began to wring his hands over racial profiling, I immediately forced him to defend his accusations.

"How can a radar gun determine if a speeding driver is black?"

"Have you ever been pulled over by a black officer? What then was his motive?"

"Does it surprise you that when someone dresses like a hoodlum that the police might suspect him of being one?"

The black jurors were stunned to see a white person force them to defend their racial talking points. But did this make them dislike me? At first, perhaps. But I eventually seemed to develop a great rapport with them, and a few of us even went out for drinks one night after jury duty (We still keep in touch).

American Renaissance's Jared Taylor has found that when he speaks to audiences about racial differences in IQ, that the black audience members are often much more open to the subject than people give them credit for. One reason for their receptivity to Taylor is his courage to speak honestly to them. Many blacks take such racial candor as a sign of respect, which it is. Blacks have no respect for whites who ingratiate themselves to them, which they view as a form of weakness, quite rightly.

The other whites in the room, having seen my racial self-assurance, felt more confident to vote and deliberate as they honestly saw fit.

The black jurors also had a natural distrust of law enforcement that I came to see as not entirely unhealthy. They were willing to indict when guilt was glaringly obvious, but in most cases the prosecutor had to work extra hard to persuade them. We had several cases that were simply absurd and that we rightly dismissed. During those deliberations, the black jurors were my most reliable allies.

In contrast, the Hispanic jurors often seemed to gain satisfaction from indicting, even if the defendants were Hispanic (which they often were). They also had little appreciation for civil liberties.

For example, a grand jury hears a lot of "Buy & Bust" cases. A Buy & Bust occurs when an undercover police officer poses as a drug buyer. The officer approaches a drug dealer on the street, negotiates a sale, and then arrests him afterwards.

I once asked a prosecutor why this practice did not qualify as entrapment (as Paul Craig Roberts has argued). But one Hispanic juror could not understand my concern for civil liberties.

"The guy is guilty", he said to me during deliberations. "Who cares how they got him?"

Still, despite such constitutional obtusity, it was obvious that grand jury service was a healthy assimilative experience for these immigrant jurors. It gave them the genuine feeling of being a citizen—in short, of being an American.

Surely this kind of civic participation would be impossible in their home countries. I asked one Mexican juror how justice works in Mexico.

"Trial by judge, Man", he told me, shaking his head. "If the judge doesn't like you, you go to jail".

In the end, I think most everyone found grand jury duty to be a positive experience. Many jurors had difficulty saying goodbye to each other on our final day of service.

However, the experience still left me discouraged, and for one simple reason.

I keep wondering what would happen to me if by chance I ever found myself on the witness stand—pleading my case before a group of people so very unlike myself. Would they even understand me? Or worse, would some of the jurors be predisposed against me because of my race?

This, remember, is a problem that will only get worse.

If an Obama Amnesty passes during the next four years, we could have several million foreign-born citizens added to the jury pool.

Our right to a trial by an impartial jury of our peers may then be irrevocably lost.