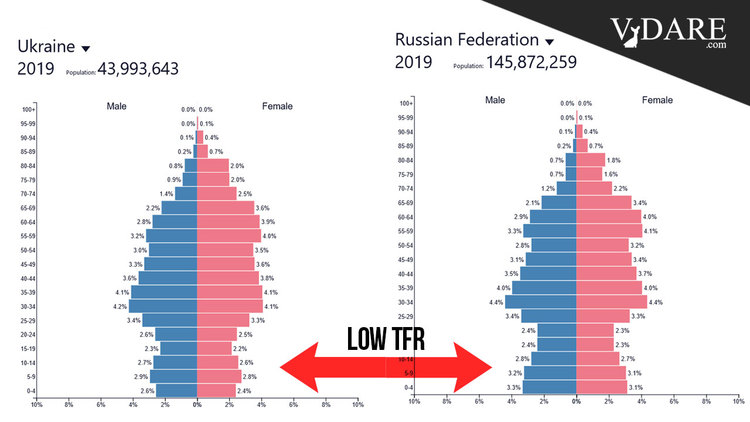 Earlier by Steve Sailer: Will A Giant Wave Of Migrants From Africa Head Toward Europe Again Due To Mr. Putin's War?

Demography is destiny. Steve Sailer picked up on this theme March 10th, wondering whether wartime disruptions will start off another flood of mass migration from the poor Third World South to the prosperous First World North.

Will they? I don't know; but I do know that as natural as it is to be distressed at the human suffering we're seeing in Ukraine, and as justified as we are to be angry at the gross stupidity of U.S. foreign policy this past thirty years, it's important for someone to be talking about these events in the language we here at VDARE.com most naturally use: the language of demography and migration.

Demography, yes. I've commented elsewhere that calling economics "the Dismal Science" is an error. The really Dismal Science is demography. There's even a case to be made, although I'm not going to make it here, that economics is downstream from demography.

Be that as it may, you're not going to understand much about the world we live in without some grasp of basic demography.

Two weeks ago I remarked that the Russia-Ukraine war is the first of any significance to be fought in demographic modernity—that is to say, between modern nations with low fertility, declining workforces, and swelling numbers of geezers.

British commentator Ed West has been having the same thoughts, and enlarged on the idea at his Substack account, March 10th. He notes that in the first week of Vladimir Putin's war Russia lost between two thousand and six thousand men. Then he adds:

Whether those in the Kremlin will weep for them, they must shudder at the thought that in the average week the country loses another 2,000 through population decline, a rate that rose to 20,000 during Covid. But even in normal periods, Russia is now shrinking by more than 100,000 people a year and with no prospect of raising fertility above the 2.1 total fertility rate (children-per-woman) replacement threshold.

Ed's starting point is a short piece by yet another commentator: Aris Roussinos over at Unherd. (And yes, I apologize for referring you to so many different commentators. There are a lot of smart people out there saying smart things. Someone has to swoop over all that, pluck out the most VDARE-ish points, and stitch them together. That's me.)

As that tells you, Roussinos is sticking to the matter of food supplies, and disruptions thereto. He doesn't get into demography. Ed West does, though, in his long and illuminating piece.

A couple of things in Ed's piece above stopped my eye.

First one, the third paragraph:

The incomprehensible thing about this war is that Russia is not a belligerent young nation in need of expansion; it is not filled with frustrated young men hoping to assert themselves in conflict, as with Syria, Afghanistan or the world's other conflict zones; it is already elderly, ageing quickly and in some parts heading for oblivion. Some 20,000 Russian villages have been completely abandoned in recent years, and 36,000 others have fewer than ten inhabitants left and will follow them soon. A third of land once farmed in the former USSR has now been abandoned.

There's demography with a vengeance. The reason it stopped my eye, though, was nostalgic.

Way back in my childhood—I was nine or ten years old—my primary-school class had a history teacher who made a great impression on me, although I have long since forgotten his name. He was an older guy—in his fifties, I'd guess—rather strict and opinionated, did not suffer fools gladly, but with the gift of making his subject interesting, with a lot of colorful anecdotes.

One lesson he gave us was about the Vikings. Great numbers of warlike men came storming out of Scandinavia in the ninth and tenth centuries, wreaking havoc on the rest of Europe.

That piqued my curiosity. I wondered about the asymmetry. Why did Scandinavia have such a surplus of manpower? Why weren't we storming out of Britain, France, Germany, and Russia to wreak havoc on them?

The teacher called on Dr. Malthus to slap me down. Scandinavia had been producing food in too much abundance, he explained. The population ballooned, the result followed.

It was a short, sharp exchange, but it's stuck in my mind. There you see the signs of a budding demography buff.

The second thing in Ed West's piece that stopped my eye: a reference to Paul Morland's 2019 book The Human Tide, which I read soon after it came out. Morland is an actual demographer; he teaches the subject at a British university. 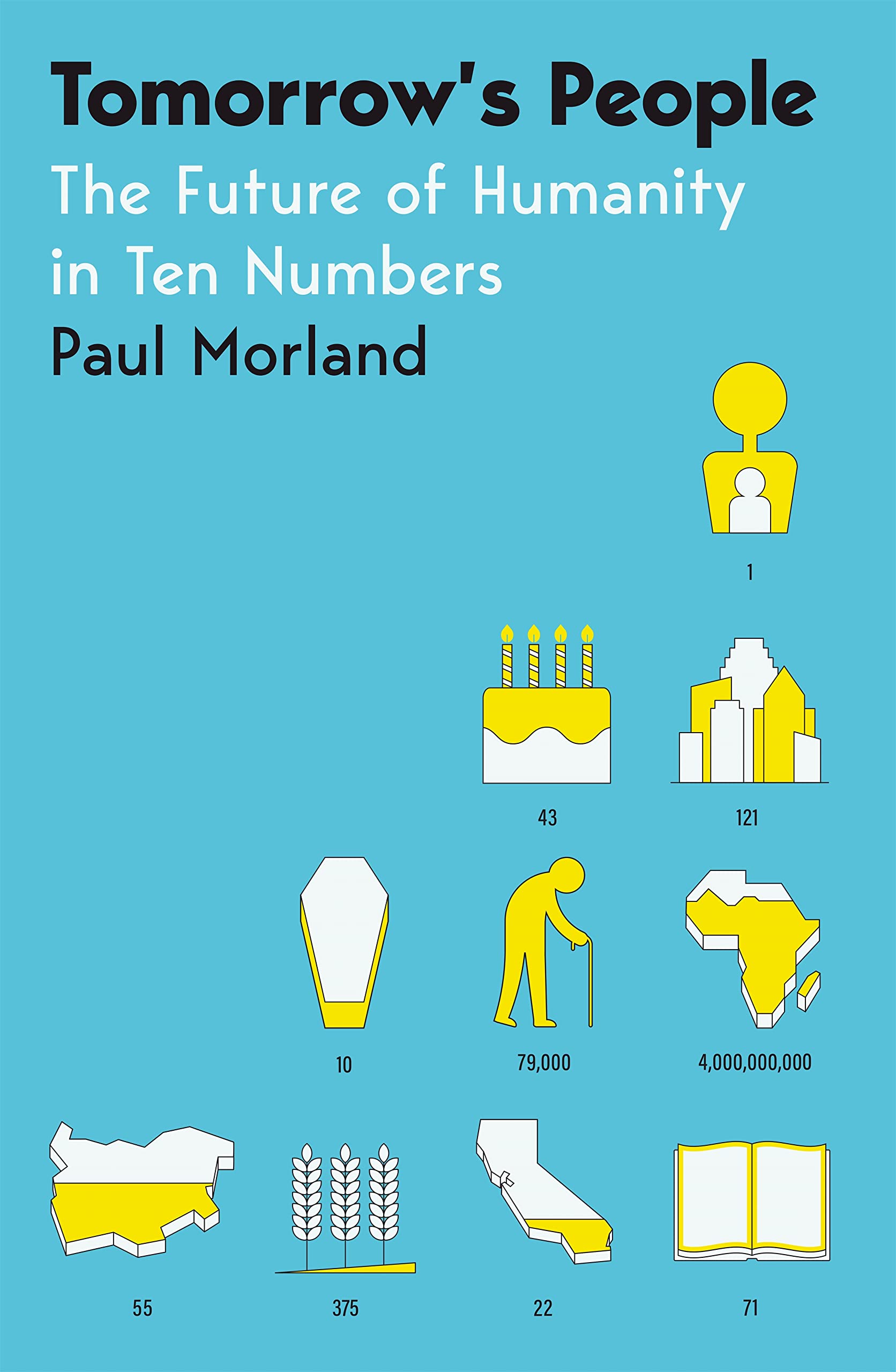 Now Morland has a new book coming out, title: Tomorrow's People: The Future of Humanity in Ten Numbers. The book actually comes out in Britain this month. I don't know the U.S. publication date, but you can get the British edition from Amazon.com.

Ed West apparently got a prepublication copy of the book, and he writes about it at length. Sample:

Morland talks of the trilemma facing ageing nations, whereby you can have two of the three: ethnic continuity, a thriving economy or a comfortable lifestyle without the huge stress of mixing child-raising and a modern economy. Israel has sacrificed the latter, Japan has chosen to take the economic hit, while Britain's leaders have given up its ethnic continuity. But that, alas, was a short-term solution, since young immigrants don't magically avoid the fate of Father Time any more than the rest of us do.

That's a great insight. Just to spell it out again: there are three horns of the trilemma, of which a nation may only choose two.

Those are your three options; but you can only choose two.

Israel has chosen (1) and (2): ethnic continuity and a thriving economy. Far as I know Israelis do have a decently comfortable lifestyle, but it's with, not without the stress of raising kids while working full-time. But Israel is the only advanced modern nation country with Total Fertility Rate [TFR] well above replacement level. And no, it's not just Israeli Arabs propping up that number, nor is it the ultra-Orthodox:

Strong pronatalist norms cut across all educational classes and levels of religiosity.

[Why are there so many children in Israel?, Taub Center for Social Policy Studies in Israel, February 2019]

Japan's chosen (1) and (3): ethnic continuity and that comfortable lifestyle with a minimum of bother from kids, at the cost of a thriving economy. So says Morland.

You could pick nits with that. Japan's economy is doing OK, I think. Still, I'll allow it's not the world-bestriding economic colossus that boosters back in the 1970s told us it would be.

Britain's chosen (2) and (3): the thriving economy and the comfortable child-free lifestyle, two parents working full-time, at the sacrifice of ethnic continuity. Morland's nailed that all right.

But as Ed West says, mass immigration doesn't really solve the trilemma, just postpones the inevitable—puts it off for our children and grandchildren to deal with. That's not a solution, it's a cowardly cop-out.

Ed West doesn't say where Morland puts China. I'd be interested to know. When my copy of Morland's book arrives early next month, I'll report back.

The ChiComs seem to be trying for the trifecta. Yes, they want ethnic continuity; yes, they want a thriving economy; yes, for the sake of their own political legitimacy they want their citizens to have a comfortable lifestyle…but with, not without, the stress of raising kids while pursuing full-time careers.

Mrs. Derbyshire, who is plugged in to Chinese social media, reports that a common lament from her old high school and college classmates is that their kids, now in their late twenties and early thirties, have no interest in starting families. "Shall I ever be a grandmother?" the classmates moan.

How about us in the U.S.A.? Am I kidding? We can't even talk about these things. "Ethnic continuity"? [Scream.]

Systemic racism: that's what's important—that, and lifting up our lamp beside the golden door for the planet's huddled masses yearning to breathe free …

Demography? Who cares about that—other than a few math geeks?