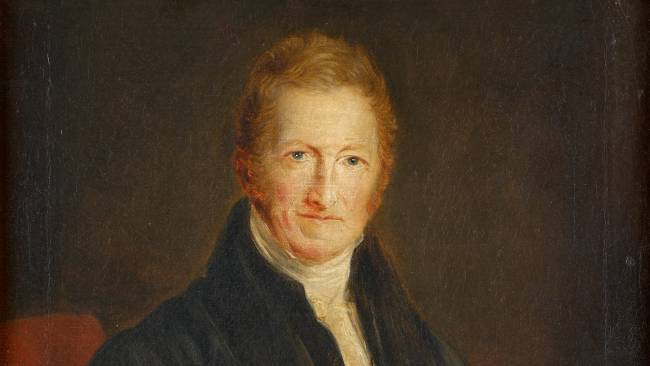 Malthus Wasn't Wrong, He Was Late

At the annual Edge question (this year: What scientific idea should be retired?), Matt Ridley writes:

T. Robert Malthus (he used his middle name) thought population must outstrip food supply and "therefore we should facilitate, instead of foolishly and vainly endeavouring to impede," disease, hunger and war. We should "court the return of the plague" and "particularly encourage settlements in all marshy and unwholesome situations". This nasty idea—that you had to be cruel to be kind to prevent population growing too fast for food supply—directly influenced heartless policy in colonial Ireland, British India, imperial Germany, eugenic California, Nazi Europe, Lyndon Johnson's aid to India and Deng Xiaoping's China. It was encountering a Malthusian tract, The Limits to Growth, that led Song Jian to recommend a one-child policy to Deng. The Malthusian misanthropic itch is still around and far too common in science.

Gregory Clark's A Farewell to Alms documents, using English public records such as wills from 1200 to 1800, that the English over these 600 years were using Malthus's 1798 advice to engage in "moral restraint" avant la lettre. The chief mechanism was not exposing babies on mountainsides or whatever, but was simply delaying marriage until a couple could afford the various accoutrements appropriate for their class.

How different in that regard was Jane Austen's world from today? Some, but the similarities should be obvious.

The average Englishwoman married during these centuries between 24 and 26. In contrast, the average Chinese woman married around 18. Thus, the Chinese population would grow faster, but tended to collapse when good government broke down.

In contrast, most of sub-Saharan Africa didn't have to worry about Malthusian traps until fairly recently. Population density outside of a few nice highland locations tended to be well below the agriculture capacity of the enormous amount of land. Diseases, competition with co-evolving wild animals (especially elephants, who consumed crops if there weren't enough people around to drive them off), and lack of fortifications meant that much of Africa tended to be underpopulated. The great African fear was not overpopulation of a region, but of humans dying out all together in an area.

Much the same system as the English had was at work in the U.S., although that was largely forgotten due to the tendency to assume by the still-dominant Sixties Folks to assume that the Fifties represented How Things Were Done Since Civilization Began. In reality, the very young average age of first marriage for American women in the 1950s compared to previous decades represented a zenith of mass prosperity.

The sheer numbers of the giant Baby Boom, combined with the technological failure to continue to progress to even faster personal transport such as flying cars (which would have vastly increased the supply of suburban land), quickly brought us back to a more historically common situation of delayed marriage.