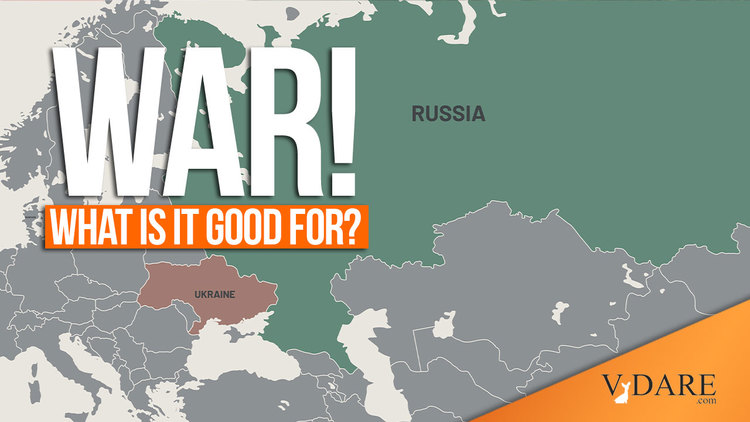 When war fever swept the Wall Street Journal opinion-page in the summer of 2006 due to the Israel-Hezbollah war, I theorized that the main reason for war, military conquest, was increasingly out of date:

War! What is it good for?

Perhaps not absolutely nothing yet, but less and less these days. Civil war will be around for a long time, but invasion and conquest looks less and less sensible, even from a completely amoral national cost-benefit calculus.

Back in the good old days of James K. Polk, starting a cross-border war for lebensraum, minerals, and strategic harbors, such as the Mexican-American War, could be highly profitable, especially, as in the case of Mexican California, when the target was ridiculously underpopulated.

In the 21st Century, however, there just aren’t that many such worthwhile targets laying around. ….

The lebensraum (“living room” — yeah, I know, it sounds amusing, but it’s not) rationale for war makes sense if you’re using all your farmable land and your population is growing faster than the output per acre and you can’t trade your manufactured goods for food. Japan fell into this trap when the Depression and rising tariffs choked off international trade, with the per capita consumption of calories by the Japanese falling during the 1930s toward dangerously low levels. Thus, Japan’s horrific war in China. Fortunately, all those conditions are unlikely to apply these days.

Minerals, other than oil, just aren’t that important economically anymore. And we’re spending 50% more on occupying Iraq each year than all the whole country’s current oil production is worth at $70 per barrel even if we stole every drop.

Harbors and other strategic spots are still of some value, but the great natural harbor of San Francisco is, oddly enough, less busy these days than the artificial harbor of Los Angeles-Long Beach. Owning stuff like Gibraltar and the Panama Canal just isn’t that important anymore.

If you are a high tariff country, it’s economically advantageous to bring more territory within your tariff barriers, but tariffs are awfully low these days.

Also, most of the great empires are largely broken up. Most countries are ruled by somebody from, more or less, their own continent and race. Israel is seen as a European intrusion into the Middle East, so it’s highly unpopular with its neighbors, but most of the other extra-continental outposts of white rule are gone, like Rhodesia and South Africa, or are dominant, like Canada and Australia.

The perceived cost of holding a conquest has skyrocketed. There just aren’t that many empty spots on the map anymore, the way the San Francisco Bay Area, perhaps the finest spot for human habitation on earth (and I’m from LA so that’s not easy for me to say), was practically empty in 1845.

Moreover, the spread of the idea of nationalism from Europe to the rest of the world, replacing dynasticism as the reigning assumption, means that the kind of easy occupations that, say, the British enjoyed in India for so long just aren’t feasible. If the masses assume that who rules them is none of their business, then it’s pretty easy for an outsider to take over. But, nowadays, everybody believes that their rulers should be, more or less, from among them.

Further, countries that are advanced enough to enjoy the air supremacy that allows you to conquer another country are generally also so advanced that they don’t have the stomach for a massive occupation of a foreign country that’s not directly threatening them. To permanently crush a popular insurgency, you have to slaughter a lot of insurgents, and that’s hard to do when the victims’ relatives have video cameras to show the carnage on television around the world.

See the sequel to this: “Insights from the Woody Hays Chair of National Security Studies.”

Also, see “Exactly Whom Is Iran Supposed to Invade?”

Has Mr. Putin’s War proved my 2006 theory wrong? Or did Putin make a really stupid mistake that will turn into a disaster for everybody, by no means excluding Russians?