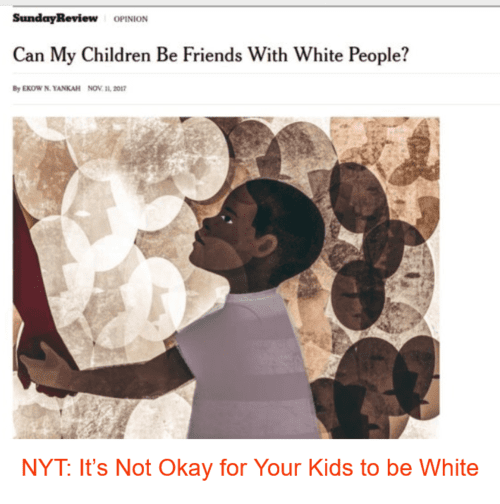 You maybe heard about the black law professor who published an op-ed in the New York Times expressing the anguish he claims to feel when teaching his kids, as he feels he should, that white people can't be trusted, and blacks can't be friends with them. [Can My Children Be Friends With White People?, by Ekow N. Yankah November 11, 2017]

The professor is Ekow N. Yankah. He teaches at Yeshiva University in New York City. To judge from his pictures, he's a full-blood negro. Some commenters, in comment threads to articles about the op-ed, have speculated that the name as published is a pseudonym, on the grounds that "Ekow," that's e-k-o-w, is just a reversal of "woke," which is the word currently used by Cultural Marxists to mean "fully compliant with the latest release of political correctness." 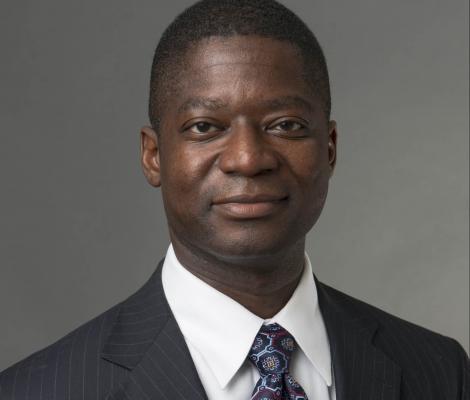 I am wiser than those commenters. I know that in the West African nation of Ghana, it is a common thing for children to be named for the day of the week on which they were born. I was born on a Sunday: had I been Ghanaian, my name would be Kwasi, which means "Sunday".

Well, Ekow means "Thursday." Professor Yankah was born on a Thursday; and either he or his parents—or, much less probably, his grandparents—are Ghanaian. Or, just possibly, his parents are native American blacks practising West African onomastics.

His op-ed was widely circulated and generated much comment. Sample quote:

For many weary minorities, the ridiculous thing was thinking friendship was possible in the first place. It hurts only if you believed friendship could bridge the racial gorge.

I do not write this with liberal condescension or glee. My heart is unbearably heavy when I assure you we cannot be friends.

For African-Americans, race has become a proxy not just for politics but also for decency. White faces are swept together, ominous anxiety behind every chance encounter at the airport or smiling white cashier. If they are not clearly allies, they will seem unsafe to me.

You get the picture.

My own reaction to the op-ed was a yawn—and the reflection, which also showed up here and there in the comment threads, that if living an "unsafe" life among whites causes the professor such alienation and angst, and such fears for his offspring, perhaps he'd be happier in his, or his parents', native country—where roughly every seventh person is named "Ekow."

Do these latter blacks ever themselves reflect on this contradiction? I doubt it.

But what made this dreary bit of hypocrisy—the guy is a law professor, for crying out loud: he drives a much better car than I do—what made it Radio Derb-worthy was a personal aspect. 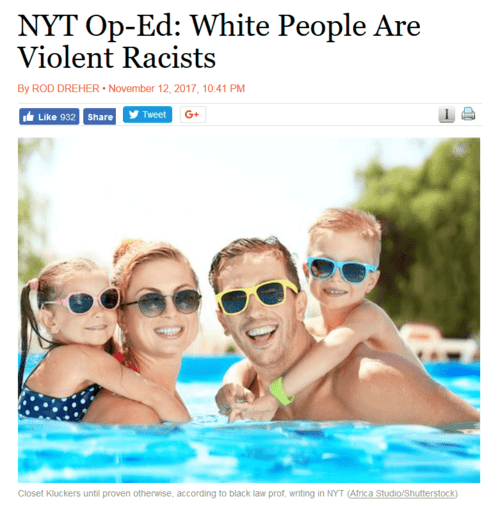 One of the articles about the professor's op-ed was by Rod Dreher in the American Conservative, November 12th. [NYT Op-Ed: White People Are Violent Racists]

I had a slight acquaintance with Rod during my early days at National Review. I recall him as a pleasant fellow, somewhat shy, of the type that, in conversation, pauses carefully to digest one's question and think out an answer. Though I didn't grasp it at the time, his writing shows him to be a deeply committed Christian with interesting ideas about the proper role and attitude of such people in developed early-21st-century society.

I mean, his ideas are interesting to people who find that kind of thing interesting. I confess I'm not one of those people; but that's not Rod's fault.

What is his fault, and what I herewith register my complaint about, is that in the November 12th article about Prof. Yankah's op-ed, Rod posits an equivalence between that op-ed and my infamous 2012 article in Taki's Magazine titled "The Talk: Nonblack Version"—the article that got me dropped as a contributor by National Review.

Back in 2012, John Derbyshire was fired by National Review for this column in Taki's Magazine in which he listed the things he told his children so that they could protect themselves from black violence.

I note in passing the inaccuracy there in Rod's saying that I was fired. Since I wasn't an employee of National Review, I could not be fired. That may sound nitpicky, but Rod graduated from journalism school, and journalists are supposed to be punctilious about facts.

That aside, Rod's opening paragraph is not objectionable. I do indeed want my kids to protect themselves from violence; and on all the statistics I know of, blacks are far more violent than non-blacks. It's a thing kids ought to know. How will they know it if their parents don't tell them?

What I object to in Rod's piece: his then equating my article with Prof. Yankah's. From Rod, quoting Prof. Yankah.

"Spare me platitudes of how we are all the same on the inside. I first have to keep my boys safe.”

That is the black version of what John Derbyshire said.

Sorry, but I think that gives a wrong impression. Rod reinforces that impression further on, when he notes that my piece, a white guy warning his kids about blacks, got me dropped, while Prof. Yankah's piece—in a much more prestigious publication—will have no negative consequences for his career.

That's a fair point in itself, and of course true; but it reinforces the equivalence between me and Prof. Yankah—an equivalence I strenuously resent and deny.

Yes, you can match up some of my sentences with some of the professor's. But the overall tone and cast of my article are quite different from his.

He tells his kids they should not hope for real friendship with whites. Here's what I wrote:

In that pool of forty million, there are nonetheless many intelligent and well-socialized blacks. (I'll use IWSB as an ad hoc abbreviation.) You should consciously seek opportunities to make friends with IWSBs. In addition to the ordinary pleasures of friendship, you will gain an amulet against potentially career-destroying accusations of prejudice.

That not only is not parallel to anything Prof. Yankah wrote, it's the opposite of what he wrote.

Again, while professor Yankah tells his kids to approach whites with wary suspicion, I tell mine, quoting myself again:

The default principle in everyday personal encounters is, that as a fellow citizen, with the same rights and obligations as yourself, any individual black is entitled to the same courtesies you would extend to a nonblack citizen.

I don't know that that's precisely contrary to anything Prof. Yankah wrote. But it surely bespeaks a frame of mind more generous and citizenly than his.

I await Rod's tearful, groveling apology. In the meantime, I am starting a petition to urge Prof. Yankah to return to Ghana, where he and his children can be free at last, free at last from the horrid indignities of white supremacy.

Reading Professor Yankah's op-ed, I had a thought I've had quite a lot recently: Where social antagonisms are concerned, we're passing into an age of dropped masks.

What I mean is, the ill feelings of one social group for another—of urbanites for country folk, of women for men, of Democrats for Republicans, of blacks for whites, of Jews for gentiles—used to be expressed publicly in a much lower key than they are today. Prof. Yankah's snarling at whites as untrustworthy hypocrites is an illustration of this. You wouldn't have seen something like that in the New York Times when I started reading it 44 years ago; nor even, I think, ten years ago.

The current jihad against men supposed to have forced themselves on women is another illustration. No doubt women have always been annoyed by the attentions of men they find unattractive, like the porcine Harvey Weinstein (although the depth of that annoyance can be much modified by the appeal to the female id of male status, wealth, and power…depending of course on the woman).

Now all these complexities of the mating game, and the polite hypocrisies used to mask them, have been cast away. It's now frank, open warfare. 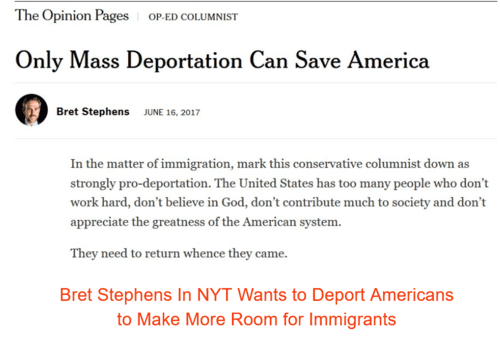 Again, I am sure there have always been Jews who loathe and despise gentiles. But until recently it would have been unthinkable for one such to argue, in the pages of the New York Times again, that legacy American gentiles should be deported en masse to make room for Third World immigrants because the latter are more hard-working, law-abiding, smart, religious, entrepreneurial, and fertile than those non-immigrant dullards. [Only Mass Deportation Can Save America, By Bret Stephens, June 16, 2017]

It's true Bret Stephens  [Email him]  reveals, two thirds of the way through his article, "O.K., so I'm jesting about deporting 'real Americans' en masse."

But then he immediately adds:"(Who would take them in, anyway?)"  Which sort of nullifies the revelation.

Again, the mask has been dropped. Bret Stephens doesn't do masks. Like Professor Yankah, he just hates us white Anglo gentiles, and doesn't care who knows it.

That's the key point: He doesn't care who knows it. He's on the right side in our Cultural Revolution. It's fine for blacks to insult whites, for women to insult men, for city slickers to insult flyover hicks, for Jews to insult gentiles.

The converses are not okay, in fact worse than not-okay. For a white to drop the mask of politeness and openly insult blacks—or even, as I found out, to just state true facts about them without malice—is considered an outrage.

Likewise, for a male to point out that a fair proportion of successful women in showbiz are cheap sluts, or that metropolitan liberals are often crass snobs, or that the percentage of obnoxiously ethnocentric jerks among American Jews is rather high, is the cue for a Two Minutes Hate against the speaker. These petty resentments and animosities have always been present under the surface, of course. I'm just saying that now, where they are in line with the CultMarx narrative, they can be openly and freely expressed, and used to whip up pogroms against the offender groups: whites, men, gun owners, Trump supporters, gentiles.

I'm sure Chinese students of the mid-1960s often nursed resentments against their teachers, politicians, and other authority figures. Those resentments were kept in check by polite traditional restraints, though, as well as by the enforcers of a totalitarian state. But once Mao Tse-tung let loose the Red Guards, the targets of ordinary social resentment could be humiliated, beaten, and killed.

Our own Cultural Revolution has so far stopped at humiliation (and career-wrecking).

But I quietly wonder how much longer that will continue to be the case.