Israeli Official: "Do You Want Half of Africa Coming Here?"

Responding to accusations of racism, senior Interior Ministry official asks lawmakers, ‘Do you want half of Africa coming here?’

Opposition lawmakers on Wednesday accused the Interior Ministry of outright racism and discrimination against black Jews, citing the recent case of an African convert who was deported hours after landing in Israel, even though he had a valid visa.

Here’s Yehuda blowing the shofar with his little son looking on.

By the way, a lot of Kenya is pretty nice due to altitude. Looks like plenty of rainfall, and both father and son are wearing quilted jackets, so this must be at a considerable elevation.

Kenyan citizen Yehuda Kimani, 31, had obtained permission from the Israeli ambassador in Nairobi to study at a yeshiva run by the Conservative movement in Jerusalem. But after being detained at the airport, he was not allowed to call his sponsors in Israel. …

Responding to the allegations, the director of the ministry’s Population Registry and Status Department, Amos Arbel, denied that different criteria are applied to visa applicants based on their country of origin. However, he also asked his detractors: “Do you want half of Africa coming here?”

Half of Africa is rapidly becoming a large number: 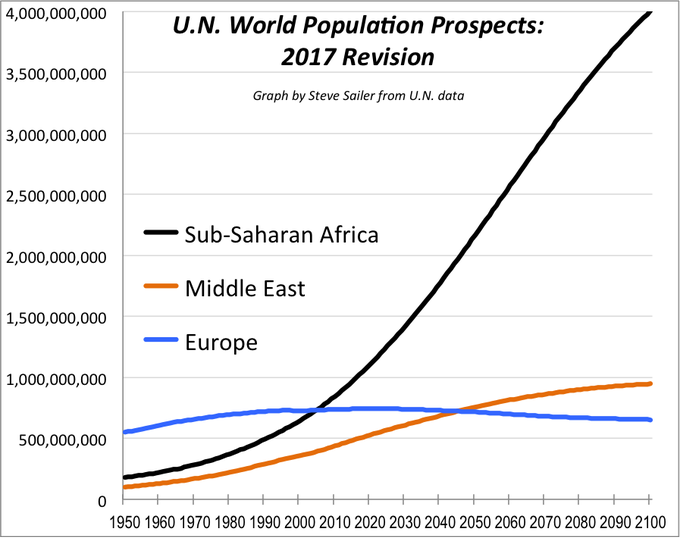 Arbel said that as far as the ministry was concerned, Kimani was not Jewish: “Sorry to say this, but for us he is a goy from Kenya.” …

They explained that in the case of non-degree-conferring institutions of higher education, such as yeshivas, the ministry only approves student visas for applicants recognized as Jewish. To date, Israel has yet to recognize the Abayudaya – the community to which Kimani belongs and which is based in Uganda – as Jewish. They are, however, recognized as Jewish by the Jewish Agency.

Kimani’s conversion to Judaism in 2010 was overseen by the rabbi from the Abayudaya community in Uganda.

The Abayudaya community split from Christianity in the early 20th century when its members began identifying as Jews and observing Jewish laws and customs. The community numbers somewhere between 1,500 and 2,000 members. …

Saying he preferred to avoid the term “racism,” Jewish Agency Deputy Chairman David Breakstone warned: “I suspect our enemies will latch onto this to call us racists, and Kimani will become the poster boy for the BDS [Boycott, Divestment and Sanctions] movement and for those who call Israel an apartheid state.”

On the other hand, do you want half of Africa coming there?

I thought, though, that Judaism had a pretty good method for discouraging all but the most pious adult male converts? I wouldn’t want to be the guy at the airport assigned to check, however.