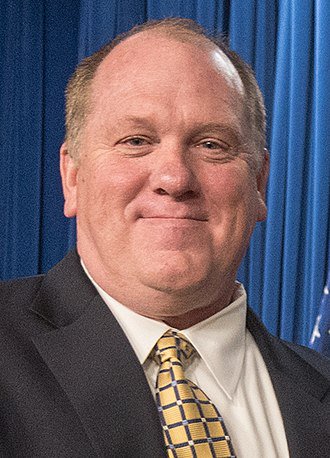 Thomas Homan (right) Acting Director of U.S. Immigration and Customs Enforcement (ICE) is promising stepped up worksite enforcement actions, something we never really saw in 2017. But some of his underlings want to limit actions to “critical infrastructure,” such as airports, defense contractors and food distribution, instead of work site raids. This is misguided. It’s time for immigration enforcement to go big or go home, and for Homan to make sure his underlings get the job done.

One of those underlings: Robert Hammer, assistant special in charge for Homeland Security Investigations (HSI), a branch of U.S. Immigration and Customs Enforcement (ICE). The Commercial Appeal uses him as a source in a story reporting “federal agents are increasing the focus on employment in Tennessee” based on orders from Homan, with a special focus on “work site enforcement”. [More Immigration Actions Planned In 2018 At Job Sites Across Tennessee, High-Ranking Enforcement Official Says, by Daniel Connolly, December 27, 2017]

This sounds good, but reporter Connolly’s article also contains some worrying signs this might simply be boob bait, an attempt to fool Trump supports into thinking something productive is being done.

Hammer says investigations will focus on “critical infrastructure” that “have an impact on the general safety and welfare of the community.” Hammer claims there is “limited staffing” preventing broader actions. 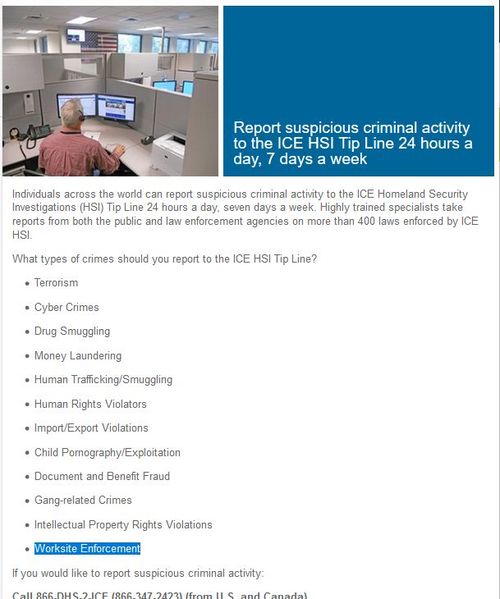 But “limited staffing” has always been the excuse from George W. Bush to Barack Obama, and immigration enforcement has more money and staff than ever. The bigger problem: Homeland Security Investigations doesn’t particularly want to do immigration enforcement. Indeed, Hammer references the tip line for ICE (866-DHS-2-ICE or 866-347-2423), but work-site enforcement is at the bottom (literally) of the list of issues ICE says there it wants to hear from the public about. 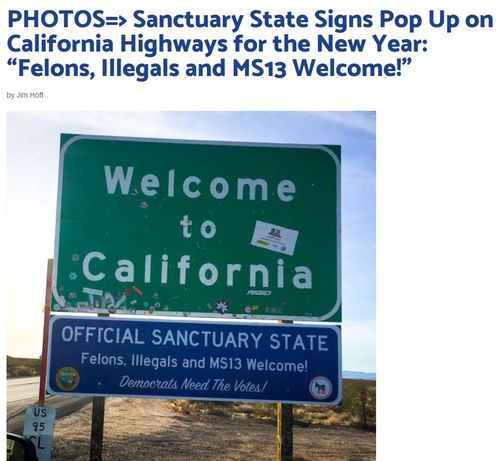 Homan said that Brown and other sanctuary-jurisdiction leaders may have violated 8 U.S. Code § 1324 - relating to "harboring certain aliens."

He said he hopes the Justice Department will look into whether mayors or governors can be criminally charged under the statute.

Of course, Homan has made similar claims in the past, but no real action followed. Yet such action is necessary if the Trump Administration is to deliver for working class Americans. After all, worksite enforcement actions not only effectively combat illegal immigration, but go a long way towards increasing employment and wages for ordinary Americans.

For example, consider this news from Chicago:

The forced departure of the illegal-immigrant workers at the Chicago-based Cloverhill bakery was a financial shock to the Swiss company which bought the bakery from a U.S. investment group in 2014. The illegals comprised one-third of the bakery’s employees, so U.S. sales fell by seven percent when the enforcement forced the company to rebuild its workforce by hiring Americans, the CEO told Wall Street analysts, according to Bloomberg:

“It’s proceeding very, very slowly because it’s like having a brand new factory and a brand new workforce,” Chief Executive Officer Kevin Toland said on a call with analysts. “That’s presenting a lot of challenges, as you can imagine” …

Results like this show Americans would truly benefit from worksite raids and immigration enforcement. Instead of just focusing on “critical infrastructure,” HSI should coordinate with the Social Security Administration (SSA) and the Internal Revenue Service (IRS) to identify employers with the largest number of illegal workers. These can be identified by the use of fraudulent Social Security Numbers (SSN) and the illegal use of Taxpayer Identification Numbers (TIN) to pay taxes.

And Target Number One should be California, precisely because the rogue state recently implemented new legislation to interfere with federal worksite enforcement:

With clear indications from the Trump administration that worksite immigration enforcement is near the top of the agenda for 2018, the state of California has taken a pre-emptive step to protect workers who may be affected. On Jan. 1, 2018, Assembly Bill No. 450 (AB 450) will take effect and impose new rules governing how public and private employers in California interact with Immigration and Customs Enforcement (ICE) and other immigration enforcement agents.

California lawmakers cited the Trump administration’s call to hire 10,000 more ICE agents and its intent to make undocumented immigrants an enforcement priority as reasons for enacting AB 450. AB 450 became even more relevant in October when acting ICE director Thomas Homan said ICE would increase worksite enforcement actions by four to five times in 2018, targeting unauthorized workers and the employers who hire them.

While all U.S. employers would be wise to take preventive measures in the face of these announcements, California employers must deal with new legal obligations courtesy of AB 450. The new law has three main components. First, AB 450 prohibits employers from voluntarily consenting to warrantless requests by immigration authorities to search workplaces and employee records. Second, it creates notice requirements related to immigration inspections. Third, it prevents employers from reverifying the employment eligibility of current employees. Employers who violate AB 450 will face penalties of up to $10,000 per violation.

For all intents and purposes, California has seceded from the Union when it comes to immigration policy. Indeed, it’s making its own immigration policy—something forbidden by the recent Supreme Court case Arizona v. United States.

ICE’s Homan needs to let California know this unconstitutional act will not be tolerated.  The best way to bring the lesson home to California: make California an example.  Homan should immediately deploy large numbers of Deportation Officers and Special Agents, supported by Border Patrol Agents from U.S. Customs and Border Protection (CBP to California to begin a series of work-site raids from San Diego in the south, to Yreka in the north, with special emphasis on Los Angeles, San Francisco, Oakland, Berkeley, and San Jose, the most obstreperous sanctuary cities.  Homan should also order that administrative subpoenas be issued for driver’s license records for illegal aliens issued under California’s AB 60.

Further on, the Border Patrol should deploy to major urban areas to begin City Patrol of sanctuary cities such as Los Angeles and San Francisco.

And there should also be criminal investigations of those in the government of California who are aiding illegal aliens in violation of Title 8 United States Code, Section 1324, Harboring Illegal Alien, including Governor Jerry Brown and Janet Napolitano, President of the University of California.

Worksite enforcement works. It benefits Americans. But it needs to be done in a systematic manner, with no employer free from fear of a raid and no politician spared if they commit illegal and unconstitutional actions.

It’s time for Thomas Homan to make ICE do its job. It’s time to go big or go home.