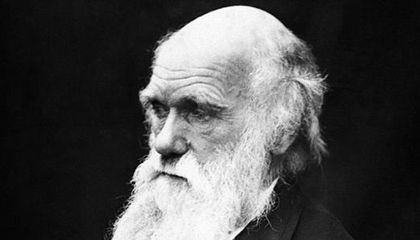 John Derbyshire On What's So Scary About Darwin?

[Note from JD: This is adapted from my keynote address to the Ascent of Man conference held by Washington Summit Publishers in Seattle, Washington, June 21-24, 2012. It was a PowerPoint presentation and I have extracted the text, and some of my impromptu comments, to make this article. It's still a bit PowerPoint-ish, though—e.g. all those bullet points—for which I apologize.]

Good evening, ladies and gentlemen. We are assembled here this weekend to discuss the future of the study of human biodiversity, which I think all of us here customarily abbreviate to "HBD."

HBD is of course merely a subtopic within the larger subject of bio-diversity in general—"BD," if you like—a subject that began to pass from the realm of observation, classification, and speculation into the realm of rigorous scientific inquiry when Charles Darwin published his book On the Origin of Species 153 years ago. Twelve years later Darwin ventured into the subtopic of HBD with another book, The Descent of Man.

Both books generated much vexation and controversy. Many people are still vexed today, over a century later. Why? What's so scary about Darwin?

1. Short answer: He dethroned us.

The world used to be for us and about us. I have remarked elsewhere that “the ordinary modes of human thinking are magical, religious, social, and personal.”

The rise of science removed us from our central position in creation, not once but again and again. René Descartes lamented (well, it always strikes me as a lament) in 1642 that:

We do not doubt but that many things exist, or formerly existed and have now ceased to be, which were never seen or known by man, and were never of use to him

Three and a half centuries later Max Weber wrote of "the disenchantment of the world." We gained understanding and power: we lost magic.

The stages of dethronement can be checked off:

That last one is sheer speculation on my part. This much can be said with fair certainty, though: If there is any further dethroning to be done, then the self—reflective self-awareness, consciousness, the precious I—must surely be next for the chopping block.

But objective, empirical, reductionist modes of thinking—"the view from nowhere "—go against the human grain. Especially when applied to human nature, where our opinions are strongest and our emotions most intensely engaged.

Hence the vexation with Darwin.

2. Who is most vexed by Darwin?

Darwin's ideas have been most vexing to believers in human exceptionalism.

For Americans, the best-known of the religious believers vexed by Darwin are the Protestant fundamentalists personified by William Jennings Bryan in the Scopes "monkey" trial of 1925. Anti-Darwin vexation had a rebirth in the Intelligent Design movement of the late 20th and early 21st century, with a broader religious scope, pulling in some Catholics and Jews.

Official Catholic doctrine, however, is un-vexed (scroll down to point §36), as are most Jewish groups this side of the ultra-Orthodox.

In the world at large, the most important group of religious vexed by Darwin are Muslims.[In France, a Muslim Offensive Against Evolution, By Stéphanie Le Bars, Time.com,  June 2, 2011]

Historicism informed by Darwin became social Darwinism—an intellectual dead end. The main currents of historicism turned their back on Darwin, at least so far as human beings were concerned. Marxism and post-Marxism were easier to work on the assumption of a uniform human nature across (historical) time and space. They took up Adolf Bastian's notion of "The psychic unity of mankind ."

Across the late 19th and early 20th century, Darwin-flavored approaches in the human sciences—instinct theory in psychology, race theory in anthropology, social Darwinism in political science—came under attack from historicists. The word "history" in their attacks began to be replaced by "culture," and grand Hegelian schemes of historical evolution fell out of favor. Historicism became culturism. We still hear "culture" offered today as an all-purpose explanation for social phenomena.

In the last third of the 20th century, biology re-entered the human sciences. The revival actually began in psychology, as the barrenness of behaviorism and the need to bring back instinct in some form, became ever more apparent. Other contributing factors were:

Milestones in the return of biology were the work of Hamilton, Trivers, and others in bringing human social behavior under the scope of evolutionary biology; the popularizations of Konrad Lorenz and Desmond Morris ; and the controversies over psychometrics ignited by Michael Young, Hans Eysenck, and Arthur Jensen.

The revival culminated in Edward O. Wilson's 1975 book Sociobiology, which announced the arrival of a new discipline: "The systematic study of the biological basis of all social behavior."

The new openness to biology in the human sciences generated a reaction from the culturists and Marxists, who still dominated the field.

Stephen Jay Gould, Richard Lewontin, and other Left activists formed the Sociobiology Study Group in response to E.O. Wilson's book. Gould subsequently produced The Mismeasure of Man  (1981), one of the most successful popularizations of culturism. Lewontin, with Leon Kamin and Steven Rose, followed with Not In Our Genes(1984), a frankly Leftist critique of sociobiology. Leda Cosmides, John Tooby, et al. tried to square the circle with Evolutionary Psychology and The Generation of Culture (1992)—a somewhat kinder'n'gentler, de-caffeinated version of Wilson's sociobiology.

Wilson himself had already written bluntly about this counter-revolution in On Human Nature  (1979):

The strongest opposition to the scientific study of human nature has come from a small number of Marxist biologists and anthropologists … They believe that nothing exists in the untrained human mind that cannot be readily channeled to the purposes of the revolutionary socialist state. When faced with the evidence of greater structure, their response has been to declare human nature off limits to further scientific investigation.

The human sciences had been corrupted, though: or rather, the biological come-back had failed fully to reverse the culturist corruption that set in earlier in the century.

Present-day inequalities between so-called "racial" groups are not consequences of their biological inheritance but products of historical and contemporary social, economic, educational, and political circumstances.

Here’s another example, from the National Science Foundation’s current web page on race:

The genetic variation in populations such as Europeans and Asians are actually subsets of the variation of the African population.

Which of course explains why so many sub-Saharan Africans look exactly like Koreans!

Along with the intellectual reaction from the Left against biology, there was a social reaction affecting ordinary citizens of many persuasions and convictions.

The Civil Rights Revolution brought self-consciousness about race in the U.S.A. to new heights. De-colonization had a similar effect in the old imperial powers, aided by mass immigration from former colonies.

The U.S. Main Stream Media promoted egalitarian narratives about race: Books (To Kill a Mockingbird, 1960; Black Like Me, 1961), movies (Guess Who's Coming to Dinner, 1967), TV dramas (Roots, 1977) and sitcoms (Good Times, The Jeffersons, mid-1970s). The 1965 Immigration Act, the 1970s influx of Mexicans, and the "coming out" of homosexuals (Stonewall riots, 1969) introduced Americans to diversity in all its fullness.

Intentions here were good: To fix people's attention on our common humanity. The effect, however, was to plant false ideas in the popular imagination—the ideas that:

These false ideas have had great staying power.

On the particular issue of race differences, there was a brief spell of openness in the mid-to-late 1990s when these things were discussed with candor and realism.

In an April 2009 article titled "The Husks of Dead Theories," I commented on Ricci v. DeStefano, then being heard by the U.S. Supreme Court. This was the case of the New Haven firefighters denied promotion in spite of exam success because they were not black.

By way of discussing the background issues—race, psychometry, affirmative action, etc.—I tallied the publication dates of 50 books by well-accredited authors on these topics. The tallies are shown here. 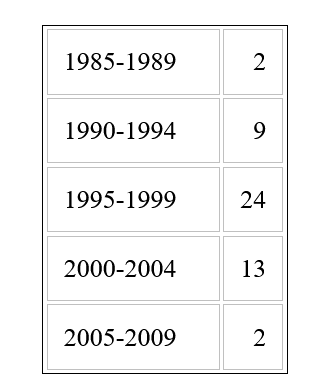 That spell of openness seems to have ended mid-decade in the 2000s. My personal impression is that the current state of affairs in the public sphere (Main Stream Media, academe, politics) is now narrower than ever. Certainly the Standard Social Science Model (SSSM)—culturism, "blank slate"-ism, "see no genes, hear no genes, speak no genes" (Steven Pinker)—is still socially dominant

This leads us to wonder about …

4. Prospects for the future.

What will become of the SSSM? Of "the prevailing structure of taboos" (Wm. F. Buckley)? Of race realism?

"Educational adequacy" lawsuits illustrate the problem. Here is a recent one from Minnesota.

In adequacy suits, plaintiffs portray the learning gap as evidence that a state is not providing all students with the "adequate" education its Constitution requires. As a remedy, they seek billions of dollars in new K-12 funding … Educational adequacy lawsuits can cost taxpayers staggering sums, and can entangle courts and schools for decades. [State poised to enter a legal danger zone By: Katherine Kersten, Minneapolis Star-Tribune,  June 9, 2012]

People jump when you say this, but it's a possibility that has been aired by, for example, the late Richard Herrnstein. I re-aired it myself, quoting Herrnstein, at the 2012 CPAC.

Stranger things have happened. Think of the solid support for eugenics among progressive people up to World War II. In the same context, a friend reminds me that the New York Times supported the (very restrictive, "national origins"-oriented) 1924 Immigration Act.

China is the obvious—though not (in my opinion) totally inevitable—candidate here. If the Chinese can resolve their current systemic problems and become a scientifically and culturally competitive superpower, there will be consequences for Western intellectual development.

A case in point: the Sokal hoax.

On the one hand, the Left prides itself on being the party of science. Hence Barack Obama at his Inaugural: "We will restore science to its rightful place." Actual scientists largely agree with this conceit: "Most scientists identify as Democrats (55%), while 32% identify as independents and just 6% say they are Republicans." (Pew Research, July 9, 2009).

And yet, the Left humanities are riddled with anti-rationalism : social construction, postmodernism, feminist math, etc.

"We will restore science to its rightful place." All right, Mr. President, but…at the expense of Leftist ideology? Historical precedents are not encouraging.

The conservative temperament is also more deferential to authority and respectful of social taboos, neither trait conducive to the imaginative and contrarian thinking essential to scientific progress.

And yet the Right is the party of business and commerce, and so perforce must be attentive to the  Reality Principle . Opportunities for making money by defying reality are very limited. And some religious authorities—Catholicism, Judaism—are open to science in a general way, if not precisely to HBD studies.

The future prospects for the study of HBD—for race realism, for the SSSM, and for "the prevailing structure of taboos"—are therefore many and varied.

It is not likely that we shall advance to a society with no taboos at all. As I have pointed out elsewhere, people like taboos.

We may reasonably hope, though, that the taboos of A.D. 2062 will not be quite so grossly contrary to reality and common experience as those we labor under today.

Thank you, ladies and gentlemen.