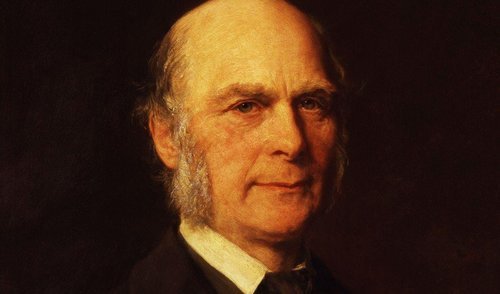 Earlier, I pointed out how remarkable it is that Charles Darwin has, in recent decades, been promoted to near-divine status in our culture, while his 13-year younger half-cousin Francis Galton has been demonized.

I don't know a huge amount about the two, having merely read a few biographies. Still, the two don't strike me as polar opposites the way they seem to strike the conventional wisdom today. Instead, they seem more notable for their similarities than their differences. The  two, grandsons of Erasmus Darwin, both seem like models of the Victorian gentleman amateur scientist.

The differences between them seem fairly exiguous. Darwin wasn't as healthy as Galton, who was hugely productive from age 30 onward (after a breakdown at university), working out the math of correlation and regression in advanced middle age. James Surowiecki's book "The Wisdom of Crowds" begins with an anecdote about the discovery of his topic: an 85-year-old Galton attended a country fair where there was a contest to guess the weight of a bull. Galton collected all the guesses with the intention of demonstrating the stupidity of crowds, but discovered to his amazement that crowds could be pretty wise in situations where random errors canceled each other out. So, the octogenarian wrote up his surprising discovery and published it in Nature.

One difference is obvious: Galton had more ideas, while Darwin had the biggest idea of the century: natural selection. Galton always saw himself as following in Darwin's footsteps.

But, here's the thought experiment that just occurred to me: What if Galton had been born in 1809  and died in 1881, while Darwin was born in 1822 and lived until 1911? My guess would be that Galton might have eventually stumbled upon natural selection first, leaving Darwin to engage in follow-up work rather  like Galton's.