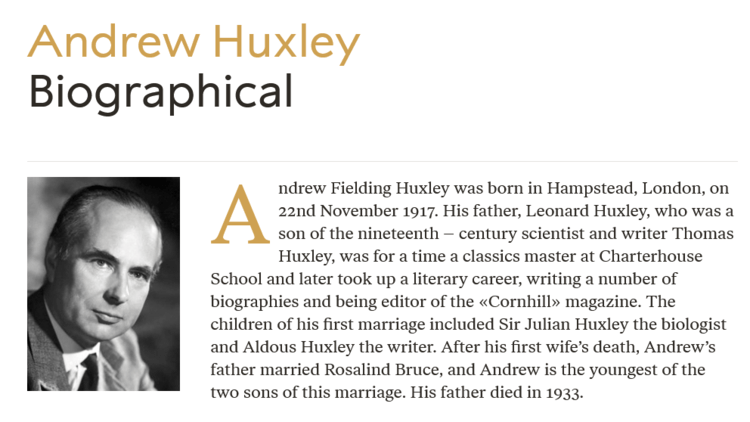 The Pseudoscience Of Eugenics In Action

Sir Andrew Huxley, a British scientist from an illustrious family whose boyhood mechanical skills led to a career in physiology — “the mechanical engineering of living things,” he called it — and a Nobel Prize for explaining the electrical basis of bodily movement, died on Wednesday. He was 94.

His death was announced by Cambridge University’s Trinity College, where he had served as master from 1984 to 1990.

Professor Huxley, a half brother of the novelist Aldous Huxley, shared the 1963 Nobel in Physiology or Medicine with his collaborator and former teacher, Sir Alan Hodgkin of Britain, and Sir John Eccles of Australia for explaining how nerve cells transmit electrical signals to control every bodily action and sensation.

Professor Huxley and Professor Hodgkin’s work further explained how anesthesia works, laid the groundwork for devices that operate prosthetic limbs, and led to the identification of certain genetic diseases.

The two specifically explained how electricity travels the length of a single nerve cell, while Dr. Eccles described how the impulse jumps from one nerve cell to the next.

Their research solved a mystery dating from 1771, when the Italian physicist Luigi Galvani zapped the leg of a dead frog with electricity, making it twitch. Movement required electricity, but how did electrical current pulse through living things?

... “It did for the cell biology of neurons what the structure of DNA did for the rest of biology,” Dr. Eric R. Kandel, a Nobel laureate, wrote in his 2006 memoir, “In Search of Memory,” about his career in brain science.

Jared Diamond recently described Huxley and Hodgkins' work as his favorite "deep or beautiful explanation."
By the way, some of the groundwork for Huxley and Hodgkins' breakthrough was done by Cambridge professor Richard Darwin Keynes, a fellow who had to go through life as practically the only man among his family and friends who didn't win the Nobel or have a historic Ism named after him.

Andrew Fielding Huxley was born in London on Nov. 22, 1917, the son of Leonard Huxley, a writer, and the former Rosalind Bruce.

His grandfather Thomas Huxley was a noted 19th-century biologist and early proponent of evolutionary theory. Julian Huxley, a pioneer in the field of animal behavior, and Aldous Huxley, the author of “Brave New World” and other works, were half brothers from his father’s first marriage.

Professor Huxley said his famous siblings had little influence on him when he was growing up; in fact, he said, they seemed more like uncles than brothers because of the age differences: Julian was 30 and Aldous was 23 when Andrew was born. He credited his technical gifts to his mother, who encouraged woodworking and was good with her hands.

He was also a direct descendant of educational reformer Thomas Arnold, headmaster of Rugby and one of Lytton Strachey's four Eminent Victorians, and a grand-nephew of poet Matthew Arnold, whose 1851 poem "On Dover Beach" provided the mood music for Darwinism.

Correction: The two prominent writers among the three, Aldous and Julian, were related to the writing Arnolds through their mother. Andrew was not.

Here's a long Wikipedia article on the Huxley family, their accomplishments and their psychiatric problems. It concludes:


... but both the talent and the mental problems would have interested Francis Galton: "The direct result of this enquiry is... to prove that the laws of heredity are as applicable to the mental faculties as to the bodily faculties".

If you Google on

you get 115,000 pages. So, obviously, the efforts at good breeding undertaken at least since the 18th century by the friends, family, and forebearers of the original Darwinians were all for nought.