Mark Steyn: the Left Is Attempting to Equate Republicans with Nazis

A segment of Fox’s morning show on Sunday began with a picture of the recent Boston demonstrations. On the left side were a handful of people standing in favor of free speech; on the right in the photo was a mob of thousands of antifa thugs, probably rentals as was likely the case in Charlottesville.

Below, the photo being discussed: 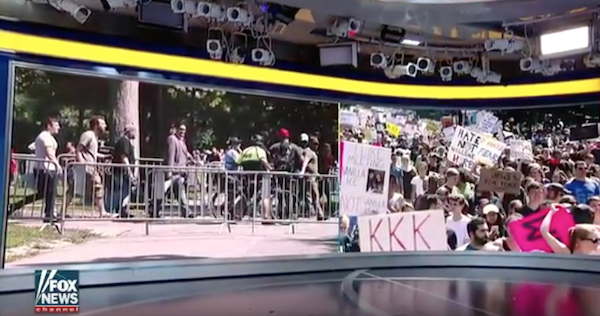 Nobody at Fox mentioned that there was probably a dearth of free speechers because people were afraid of being beaten up by the thugs allowed to run rampant by police, as has been reported in Charlottesville. That danger tends to cut down on attendance. And there was violence in Boston, like the woman who was assaulted as she held an American flag.

Antifa thugs rarely get busted but one example happened in Berkeley: masked professor Eric Clanton was charged a couple months ago with four felony counts of assault with a deadly weapon after he used a U lock bike lock to slug at least seven people in a protest.

But back to the actual TV discussion, Mark Steyn made an important point that the left is trying to equate Trump voters as being nazis, which does seem to be the goal, albeit insane. Do the lefties actually think that there are 62 million nazis in this country (the number of Trump voters)? If so, the commie antifa probably should move to France where everyone loves diversity.

Or can lefties manage to think at all in their current state of anti-Trump hysteria which does not seem to be abating? The mainstream left media certainly encourages the mass mental illness by creating a total fiction about Trump, Republicans and racism.

FOX GUY: Yesterday was a big day in Boston. I want to pull up a picture first and we’re going to explain this picture, do a little play-by-play. Okay folks, you’re looking at one shot on the left, one shot on the right. This was a protest — a movement, I should say — permitted by the Free Speech group. Which group do you think that is? Well in fact, they’re the ones on the left. Take a look at the mass of humanity on the right 15,000 counter-protesters, and Mark, when you look at this, you think this could be a problem for free speechers, not the KKK, not neo-nazis, but people who believe in free speech rights.

MARK STEYN: Yeah, I would rather we had more speech and fewer protests because I think the less speech you have, the more violence you have, and it would be a lot better if actually we had more people having more vigorous debates rather than toppling statues in the street. And my worry about this is that actually the left is making an organized attempt to say that if you do not vote Democrat that you’re a Nazi.

That’s the point of this. They don’t care about Confederate. . .

STEYN: Well it is dangerous, because as you were talking about earlier, it’s an explicit thing to actually tie policy differences on rather boring things, like taxes and immigration, to the most crude form of demagoguery. That’s what we just seen this last week. They don’t actually care what Trump thinks about some statue, they don’t think about whether there’s any actual real connection between guys calling for Jews to be in ovens and Trump — they want to say, if you vote for Trump, you’re a nazi, so we can’t talk with you, all we can do is smash up your rally.

JON SCOTT: Those statues that so many people want to tear down were erected in the South when Democrats were in charge — does anybody remember that? I’m not saying that the Democratic Party of today is necessarily approving of that but let’s look. . .

STEYN: Yeah I don’t have a dog in this fight. They’re basically today’s Democrats arguing about statues of yesterday’s Democrats. I mean, speaking personally, I think they should all be torn down and you should have some ones of George III put up, because that’s before all the trouble.

TRISH REGAN: But Mark is onto something here; in other words they are in a very organized way trying to label anybody who’s a conservative, who is a Republican a racist and this is dangerous rhetoric.