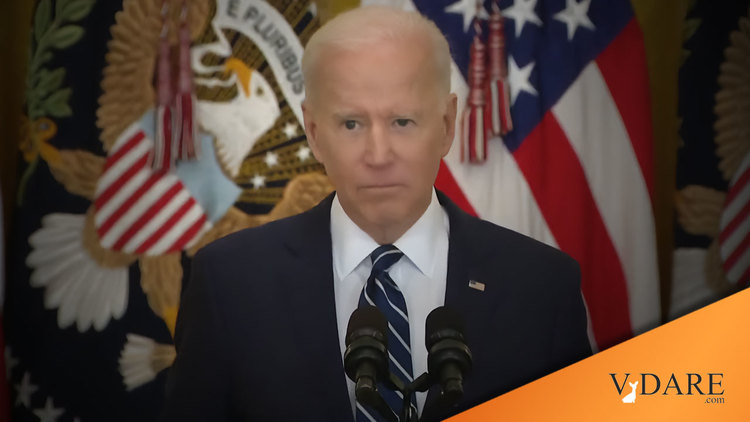 The main political event this week was of course Joe Biden's press conference Thursday. Just for once, in a spirit of commentarial dutifulness, I swallowed my loathing of politics and politicians and sat through the durn thing. How'd it go?

At a strictly personal level, it was of course a waste of my time. I'd have been more productively employed tidying up the garage.

I had actually been planning to go to the range. It was a lovely spring day; but I was late getting through my morning chores and the presser was scheduled for one o'clock. The range is an hour's drive away and closes at 4:30, so I wasn't going to fit in a decent day's shooting.

So, grumbling and cursing, I dragged myself to the sofa and sat and watched our President for an hour.

At the level of affect, Joe did better than I'd expected. He only lost the plot three or four times, didn't fall down or drool or pick his nose, and actually uttered some structured sentences, with verbs and subjects. I'll score him a B-plus for affect.

The form of the thing was thoroughly scripted and rehearsed. Joe had a cheat sheet of the reporters present, with headshots so he could put name to face, and magic-marker numbers written in for the half dozen least likely to ask anything difficult. He also had a sheaf of notes with factlets he could produce at appropriate moments, to sound well-informed.

Peter Doocy of Fox News was there, but of course not magic-markered for the President to call on. Probably whited out, in fact.

The furthest into the negativity zone that any of the press poodles went was Kristen Welker of NBC asking whether Biden hadn't perhaps moved too fast to undo Trump's policies at the southern border.

To that Biden replied that he would make no apologies for ending programs that "have an incredibly negative impact on the law" This is the guy who's so concerned for the law, he's stood down the agencies charged with enforcing the people's immigration laws.

The perception of you that got you elected—as a moral, decent man—is the reason why a lot of immigrants are coming to this country and entrusting you with unaccompanied minors.

So, pretty much a lube job on the President from the fearless investigators of the press. What. A. Surprise.

Content-wise, the questions were mostly from the Left, asking the President when he was going to implement this or that radical-Woke policy, or why he wasn't moving faster on this or that nation-wrecking scheme.

A modal question was this one from Nancy Cordes [Tweet her] of CBS:

Republican legislatures across the country are working to pass bills that would restrict voting, particularly, Democrats fear, impacting minority voters and young voters—the very people who helped to get you elected in November.

Are you worried that if you don't manage to pass voting rights legislation that your party is going to lose seats and possibly lose control of the House and the Senate in 2022?

All the noise from the Left about "voting rights" is of course an effort to keep open the loopholes that allow them to fix elections. The phrase "bills that would restrict voting" means "bills that would require voter I.D., stop ballot harvesting and mail-in voting, cut absentee ballots to the bare minimum necessary, insist on up-to-date voter rolls, and so on."

And of course Biden's people are worried that states closing those loopholes could hurt them in the mid-terms next year.

Biden himself, responding to the question, went full bluster. He called efforts to clean up the voting process "un-American." You could make a case, based on the long and colorful history of voting fraud in the U.S.A., that he's right.

Voting rules are an unholy mess, as we saw last November, and they do need cleaning up. Our President's party is against cleaning them up. To judge from their latest bill on the subject—House Resolution 1, passed earlier this month—they want more loopholes, federally enforced. [How H.R.1 intends to overturn Supreme Court rulings on elections, by  Robert Popper, The Hill, March 24, 2021]

Further along in his response to the voting-rights question the President opined that this effort by Republican state legislatures to curtail voting abuses, quote, "makes Jim Crow look like Jim Eagle. I mean, this is gigantic what they're trying to do."

That makes no rhetorical sense. An eagle's bigger than a crow, right? So if some proposal X makes Jim Crow look like Jim Eagle, that means Jim Crow looks way bigger than X. X is tiny compared to Jim Crow, not "gigantic."

The President should have said "makes Jim Crow look like Jim Canary." But I guess it's too much to expect rhetorical dexterity from Blunderin' Biden.

A great deal of what the President said was flat-out lies. "We're sending back the vast majority of families who are coming" to the border, he told us. Er, no: We're sending back thirteen percent of them [Fact-checking Biden’s press conference, New York Post, March 25, 2021].

Trump left children to starve to death rather than let them in, the President told us.

That sent me all the way back to my childhood. "Eat up your greens!" our parents used to scold us back in the day. "Don't you know there are little children starving in Africa?" To which we cheeky dissidents-to-be would respond: "Name one."

In fact a lot of Central American kids were flown back to their home countries by the Trump administration, courtesy of the U.S. taxpayer.

So, content-wise, the best I can say is that some of it made sense. I mean, Our President was not totally incoherent. Small blessings.

There were ominous sins of omission, though. The topics raised at the presser were, alphabetic order again: Afghanistan, bipartisanship, China, the filibuster, guns, illegal immigration, North Korea, re-election, and voting rights.

A couple of weeks ago I offered the speculation that this mess the Biden administration has quite deliberately created at the southern border is four-dimensional chess, a distraction. I said that that the managerial class wants is to crush the American worker and replace him with a cheaper foreigner. The real money to be made there, though, is not with fruit-pickers, meatpackers, and children's nannies—it’s with Big Tech corporations and their skilled employees.

Translation to immigration-speak: the real money is in legal immigration.

The complete silence about legal immigration in a one-hour press conference has raised my suspicion a couple of notches.

If we had a Ruling Class that gave a rat's ass about ordinary Americans and their interests, this would be a huge issue in the public forum. A patriot media would be all over it.

Mass displacement of white-collar workers by cheap indentured foreigners on guest visas and bogus "training" schemes for foreign students? Chain migration, each tranche of immigrants being chosen by the previous tranche? Birthright Citizenship for illegal aliens’ offspring—break our country's laws, we'll give your kids citizenship? Poor American kids excluded from colleges in favor of foreign students paying full tuition, all in aid of bloating the colleges' radical-Left administrations?

And so on: If you read VDARE.com you know the charge sheet.

It all needs fixing—with legislation, not executive-order tinkering. This should be at the front of the America’s mind. It's our future, the nation our children and grandchildren will live in. Yet for the hacks in attendance at Thursday's press conference, it's not worth mentioning.

Supplemental to that: Mr. President, why have you not raised the cap on so-called "refugees," as you vowed to do in February? You spoke against President Trump's cutback on refugee numbers, but you've taken no action. Why? Of course I don't want to see the cap raised, but it's strange he hasn't done it. You'd think these lefty reporters would want to know why.

I've just been reading about the situation with Echo Park in Los Angeles, billed in travel brochures as "a popular local beauty spot." Well, not recently it hasn't been. The park has become a campground for so-called "homeless" people: lunatics, addicts, alcoholics, hobos and such.

This week the city decided to clear them out, and sent police to do the job. The cops met opposition not only from the winos but also from a big mob of anarchists, screaming in their faces and throwing things [Second night of violent clashes erupt between LAPD and at least 100 protesters trying to STOP officers clearing Echo Park of homeless who have overrun the popular beauty spot, by Valerie Edwards, Daily Mail. March 26, 2021].

There are stories like this all the time. Sure, I know, these are state and municipal issues, outside the scope of the federal government. A President should have something to say about them none the less; and a reporter at a press conference would not be out of bounds asking him whether something could be done. Whatever happened to vagrancy laws?

And in the matter of justice, the feds are already involved…on the side of the anarchists, of course. Does anyone doubt that if Officer Derek Chauvin is acquitted in his Minnesota state trial, Biden's Justice Department will yield to the mob and come down on him with so-called "civil rights" charges?

Can the President tell us why we are defending rich, advanced countries perfectly capable of defending themselves, in alliance with their neighbors where necessary? Fifty-three thousand of our troops in Japan, 34,000 in Germany, and 12,000 in Italy 76 years after WW2 ended? Twenty-six thousand in South Korea 68 years after that one ended?

Is this sustainable, Mr. President? What number, in your opinion, would not be sustainable?

And more. So count me unimpressed with Joe Biden's first press conference. I awarded him a B-plus for affect back there, better than I'd expected. On form and content, I'll give C and D.

That D would have been an E, except that Joe did speak approvingly of more federal support for "pure research and investment in science." I'll thank him for that, if not for anything else.

All right, he's not my candidate and I hold the Main Stream Media in snarling contempt. Eh, I shoulda gone to the range.