Cuccinelli v. McAuliffe: How Much Black Voter Fraud In Virginia? 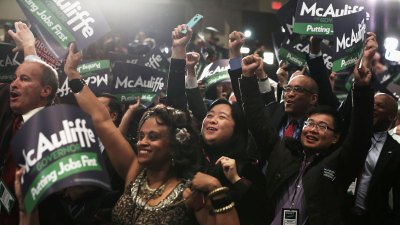 Black voters: Do they actually need to turn up?

Of course the key issue in the Virginia Governor GOP disaster is GOP Consultants Fail To Turn Out White Base For Cuccinelli as Peter Brimelow has just blogged.

But partly that is because high White turnout is the least contentious way to deal with another huge problem that the source story Why Terry McAuliffe barely won By James Hohman Politico 11/6/13 quietly reveals (P2).

(VDARE.com emphasis) Is it plausible that Blacks would turn out for New York Irish American Pol running for Governor with the same enthusiasm that they voted for a Black for President?

Of course not. For that matter last year's Presidential experience was questionable as I noted in DNC Chairwoman: We Lost Colorado Gun Vote Because We Couldn't Cheat

The electoral legacy of Obama is clearly an enormous expansion in Democratic voting fraud capabilities, most easily discernible in Black areas - but probably in Hispanic precincts as well.

In 2012 I asked Obama's Voter Fraud Facilitation Policy: Does The GOP Have The Courage To Resist?

They do not. And the Democrats have realized this