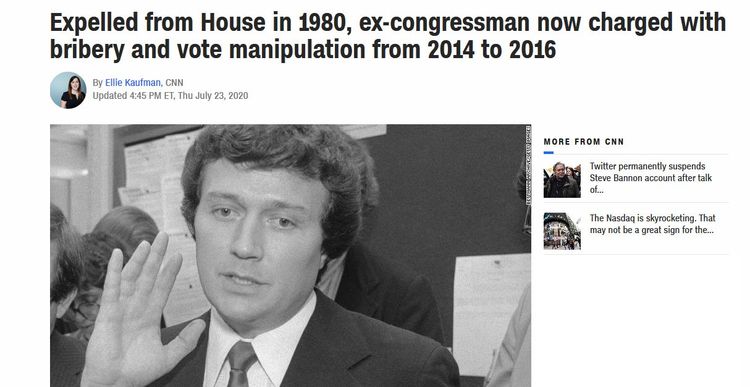 Voter Fraud In Pennsylvania: Forget About It, Jake. It's Phillytown.

We are told that vote fraud is very, very rare, but perhaps it’s more like it’s very boring and tawdry, so it’s easy to memoryhole when it does happen. For example, here are a couple of 2020 Department of Justice press releases about a vote fraud conspiracy in Philadelphia in 2013-2015:

A former U.S. Congressman was charged Tuesday in an indictment unsealed today, with conspiring to violate voting rights by fraudulently stuffing the ballot boxes for specific candidates in the 2014, 2015, and 2016 primary elections, bribery of an election official, falsification of records, voting more than once in federal elections, and obstruction of justice.

Michael “Ozzie” Myers, 77, of Philadelphia, Pennsylvania, is charged with conspiring with and bribing the former Judge of Elections for the 39th Ward, 36th Division, Domenick J. Demuro.

Myers, a Democrat from Philadelphia, who served two terms in the US House of Representatives before being the first Congressman to be expelled since 1861, has quite a Wikipedia bio:

Michael Joseph Myers was born on May 4, 1943, in Philadelphia, Pennsylvania. In 1963, Myers was arrested for burglary, but was later acquitted.[1]

In 1979, he got into a fight with a security guard and a 19-year-old female cashier in an elevator leading from the rooftop lounge of a Quality Inn motel in Arlington, Virginia, punching and kicking them. Myers became combative after they told him to turn down the music at a party he was having in the motel, shouting, “I’m a congressman: we don’t have to be quiet.” He was subsequently charged with assault and battery,[8] and eventually pleaded no contest to a charge of disorderly conduct three months later. He received a six-month suspended sentence.[9][10]

Myers was involved in the Abscam scandal in 1980. Myers was videotaped accepting a bribe of $50,000 from undercover FBI agents on August 22, 1979.[11] On that tape, Myers is recorded saying that “money talks in this business and bullshit walks.”[12] Myers was expelled from the House of Representatives on October 2, 1980, by a vote of 376 to 30, becoming the first member of the House to be expelled since 1861. Myers was convicted of bribery and conspiracy and sentenced to three years in prison in 1981.[13]

Back to the DoJ:

Demuro, who pleaded guilty previously in federal court in Philadelphia, was responsible for overseeing the entire election process and all voter activities of his division in accord with federal and state election laws.

… Myers is charged with bribing Demuro to illegally add votes for certain candidates of their mutual party in primary elections. Some of these candidates were individuals running for judicial office whose campaigns had hired Myers, and others were candidates for various federal, state, and local elective offices whom Myers favored for a variety of reasons. According to the indictment, Myers would solicit payments from his clients in the form of cash or checks as “consulting fees,” and then use portions of these funds to pay Demuro and others in return for tampering with election results.

After receiving payments ranging from between $300 to $5,000 per election from the consultant, the court papers allege Demuro would add fraudulent votes on the voting machine – also known as “ringing up” votes – for Myers’ clients and preferred candidates, thereby diluting the value of ballots cast by actual voters. At Myers’ direction, Demuro would add these fraudulent votes to the totals during Election Day, and then would later falsely certify that the voting machine results were accurate. Myers is also accused of directing Demuro to lie about the circumstances of the bribes and the ballot-stuffing scheme to investigators.

And here’s the DoJ’s earlier press release about Demuro:

Department of Justice
Office of Public Affairs
FOR IMMEDIATE RELEASE
Thursday, May 21, 2020

A former Judge of Elections has been convicted for his role in accepting bribes to cast fraudulent ballots and certifying false voting results during the 2014, 2015, and 2016 primary elections in Philadelphia.

Domenick J. Demuro, 73, of Philadelphia, Pennsylvania, pleaded guilty during a sealed proceeding on March 16, 2020, before U.S. District Judge Paul S. Diamond to conspiring to deprive persons of civil rights, and using interstate facilities in aid of bribery. The court unsealed the matter today. Sentencing is scheduled for June 30, 2020.

During his guilty plea hearing, Demuro admitted that while serving as an elected municipal Judge of Elections, he accepted bribes in the form of money and other things of value in exchange for adding ballots to increase the vote totals for certain candidates on the voting machines in his jurisdiction and for certifying tallies of all the ballots, including the fraudulent ballots. Demuro further admitted that a local political consultant [Myers] gave him directions and paid him money to add votes for candidates supported by the consultant, including candidates for judicial office whose campaigns actually hired the consultant, and other candidates for various federal, state and local elective offices preferred by that consultant for a variety of reasons. Demuro also admitted that the votes he added in exchange for payments by the political consultant increased the number of votes fraudulently recorded and tallied for the consultant’s clients and preferred candidates, thereby diluting the ballots cast by actual voters. …

“Domenick Demuro put a thumb on the scale for certain candidates, in exchange for bribes,” said Special Agent in Charge Michael J. Driscoll of the FBI’s Philadelphia Division.