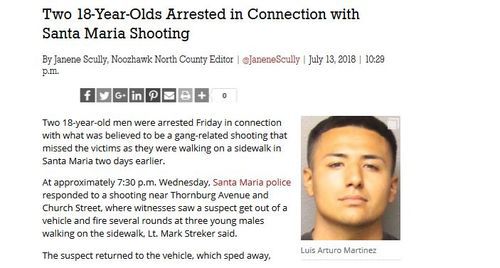 Earlier this week, in Santa Maria, California, two 18-year olds were arrested in a drive-by shooting. The gunman missed the three male targets who were standing on a sidewalk. Reports are that the shooting was gang related.  The two arrested are Francisco Ortiz-Rivera and Luis Arturo Martinez. In January Ortiz-Rivera was arrested for car jacking. Nice.[Two 18-Year-Olds Arrested in Connection with Santa Maria Shooting, By Janene Scully, Noozhawk,  July 13, 2018 |]

The immigration status of the alleged gang members is not reported. They may well be anchor babies as the population of Santa Maria more than doubled between 1980 and 2016 and the growth results from immigration. Currently 70 percent of residents are Hispanic. The population of Santa Maria surged because after the Immigration Reform and Control Act passed in 1986, immigrants, mostly from Mexico, poured into the area.

The jobs magnet was agriculture, especially strawberries.  The 2016 County crop report shows the leading crops to be strawberries, wine grapes and broccoli. These crops are labor intensive; hence, the immigration-driven population surge continues unabated. The AG Industry loves it.

And then there was 15-year- old Maribel who murdered her newborn with a broccoli knife in 2016.  [Sentencing set for Santa Maria girl convicted of killing her newborn baby, By Janene Scully, Noozhawk.com, January 05, 2017] These knives, 7 to 10 inches long,  are used to harvest broccoli. The knife belonged to her father. She and her parents are illegal aliens from Oaxaca, Mexico. The parents only speak Mixteco. They are illiterate. The present tense is being used because they probably have not been deported.

And then there was Victor Martinez who raped, tortured and murdered Marilyn Pharis in Santa Maria in 2015.  Martinez had been arrested and released six times and he had also been deported back to Mexico.

Martinez was aided by an Anchor Baby, Jose Villagomez, who was born in this country but moved back to Mexico with his illegal alien mother when he was a toddler. He returned to the US as a teen and immediately got onto trouble.

At the time of this terrible murder, the Santa Maria Police Chief Ralph Martin said, ". . .there's a blood trail from Washington, DC to Sacramento leading to the bedroom of Marilyn Pharis." The police chief blamed the murder on the state and federal governments for not enforcing our laws.

Fortunately, both Martinez and Villagomez were convicted of murder. That does not make Santa Maria safe.