Jeb Handlers will spin #CPAC2015 appearance as "brave," and "held firm," "didn't back down," to reassure #DonorClass that he's the one.

Just as Laura Ingraham predicted, the Main Stream Media’s spin on Jeb Bush’s appearance at CPAC is that he survived (although he apparently bused in supporters and still did very badly in Saturday’s presidential straw poll). But an arrogant Establishment Republican named Bush with a spendthrift Mexican immigrant wife with a taste for expensive things—now there’s a presidential couple that will inspire the historic American nation!

Some Republicans are excited about Jeb Bush because he has a Hispanic wife, Columba. Thus The Hill refers to Jeb's Hispanic wife as his "secret weapon" for winning the presidency. [How Jeb Bush's wife could help win him the White House, by Jonathan Easley, Jan. 28, 2015]. Needless to say, this crude tokenism will fail in the general election because of the overriding Latin American-style economic and political commitments of Hispanics. But there seems to be no limit to the GOP’s appetite for minority-pandering. 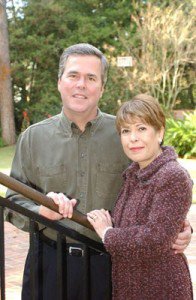 As The Hill tells us, Columba is a “Mexican-born immigrant.” It was Columba who triggered Jeb’s metamorphosis into an “honorary Hispanic,” as the Washington Post gushes:

The unlikely evolution of John Ellis “Jeb” Bush into a sort of honorary Hispanic loops back to 1970 and a tree-lined square in Leon, a colonial-era city in the central Mexican state of Guanajuato. Bush, then a teenager and student at the elite Phillips Academy in Andover, Mass., was in Mexico for a three-month exchange program. One Sunday, he spotted a girl in the back of a car promenading around the square. She struck him as “beautiful,” and so did her name: Columba Garnica de Gallo.

Liberals, campaign consultants, donors, and naïve Republicans will find this love story compelling. But when Jeb hits the trail with his wife, traditional Americans will cringe when Bush wraps Amnesty in the mantle of his marriage.

The Hill points out how Jeb and Columba evidently talk about Hispanic family values at home: “The Mexican-born immigrant has steeped Jeb in Hispanic culture.”

Steeped in Hispanic culture? What exactly does that mean?

Says The Hill: “They speak Spanish at home, and Bush allies credit her with helping shape Jeb’s ‘act of love’ message on immigration reform.”

As for the “Spanish at home” thing, David Frum has written in the Atlantic that “While modestly disavowing bilingualism, Jeb Bush does speak Spanish readily. (His wife, reportedly, has not become equally comfortable in English.)” [Is Jeb Bush a Republican Obama? February 4, 2015]

Of course, this “act of love” message is an excuse for economic terrorism. Get ready to hear the “act of love” line, ad nauseam. The message is all part of Jeb’s “Hispanic consciousness,” the apt description the Washington Post gave to Bush’s mentality. American patriots will be disgusted with Jeb’s ostentatious tokenism, featuring his wife—but liberals and minorities will sneer that Columba is a “sellout.” (The Spanish word is “vendido.”)

Traitor. Sellout. Lino (Latino in name only). These are some of the epithets Latino Republicans are called by fellow Hispanics who can’t imagine why any self-respecting descendant of Latin American immigrants would ever carry water for the Republican Party.

And Jeb isn’t even Latino—he just married one. The barrio will give you no extra points for that, Jeb.

But this doesn’t mean that Columba Bush isn’t important. She’s actually a perfect reason why Americans should distrust Jeb Bush

Not only will Bush's wife be a symbol of pro-illegal alien, multicultural Hispandering—she will also dramatize the plutocratic elitism of the Bush candidacy. Thus Columba spent, according to the Washington Post, $90,000 on jewelry at one single store over the course of 14 years. [Documents show the expensive tastes of Jeb Bush’s low-key wife, by Karen Tumulty and Alice Crites, Feb. 22, 2015]

Columba’s taste for the finer things landed her in a bit of trouble with the authorities in 1999. For some reason, she did not accurately report the amount of clothing and jewelry she purchased on an overseas trip back—close to $19,000. She had to pay a $4,000 fine [Bush Embarrassed By Wife's Run-in With Customs, by David Cox and John Kennedy, Florida Sun-Sentinel, June 22, 1999|

It seems that the Bush family views designer clothes and jewelry the same way they view illegal aliens. Let them all in—because the Bushes say so!

So much for connecting with ordinary Americans.

John Nolte at Breitbart calls the Tumulty-Crites Washington Post piece a “very personal and nasty hit-job against Jeb Bush’s wife.” That's no doubt accurate. But it’s also accurate to note that Jeb’s wife does not live like the rest of us, and it’s been a very long time since she ever has.

Columba and Jeb have absolutely no frame of reference with which to understand ordinary Americans. Any advantage Bush may have gained from having a Hispanic wife will be eviscerated by the jeering commentary about her opulent tastes.

And we can add the south-of-the-border dysfunction of Columba’s family. In yet another example of “Hispanic family values,” it turns out that Columba’s father Jose Maria Garnica is estranged from her [Jeb Bush's father-in-law hopes to reconcile with daughter, by Traci Carl, Associated Press, February 14, 2001]. Columba says her father Jose left the family when she was three. But Jose says that Columba stopped talking to him when she was a young woman. Steve Sailer has pointed out that this almost certainly means Columba herself was living in America illegally for part of her youth.

The Mexican media, in a taste of what we can expect, has of course taken the side of the authentic Mexican. AP adds:

Local broadcasters and newspapers have portrayed Garnica as the victim of an ungrateful daughter… Reforma, one of Mexico's leading newspapers, accused Columba of “forgetting her roots.”

Jose now lives in Silao, Mexico. According to AP, he “receives pension and Social Security checks from the United States—money that lets him live comfortably in Silao.” It appears that Columba’s father was a migrant worker, possibly an illegal. He is now evidently a welfare bum living in Mexico off of the American taxpayer’s money. Is he one of the 70% of Mexicans who are overweight?

So we have a potential first lady who taught her white husband that it’s neat to reject his own culture, who tries to sneak booty through customs, and whose father is very likely a Mexican welfare king living off the American dole.

That will boost white turnout.

Columba’s view from the posh Miami suburbs is dramatically different than the view a lot of white people had when they were forced out of Miami. She is a rich, entitled immigrant. It is revolting to think that she is feeding Jeb Bush his replacement identity.

For Jeb, the personal is the political. What that means for the rest of us: he will be a multicultural panderer devoted to the destruction of the traditional American nation.