Jeb Bush: Carrying The Chamber of Commerce's Water On Education And Immigration 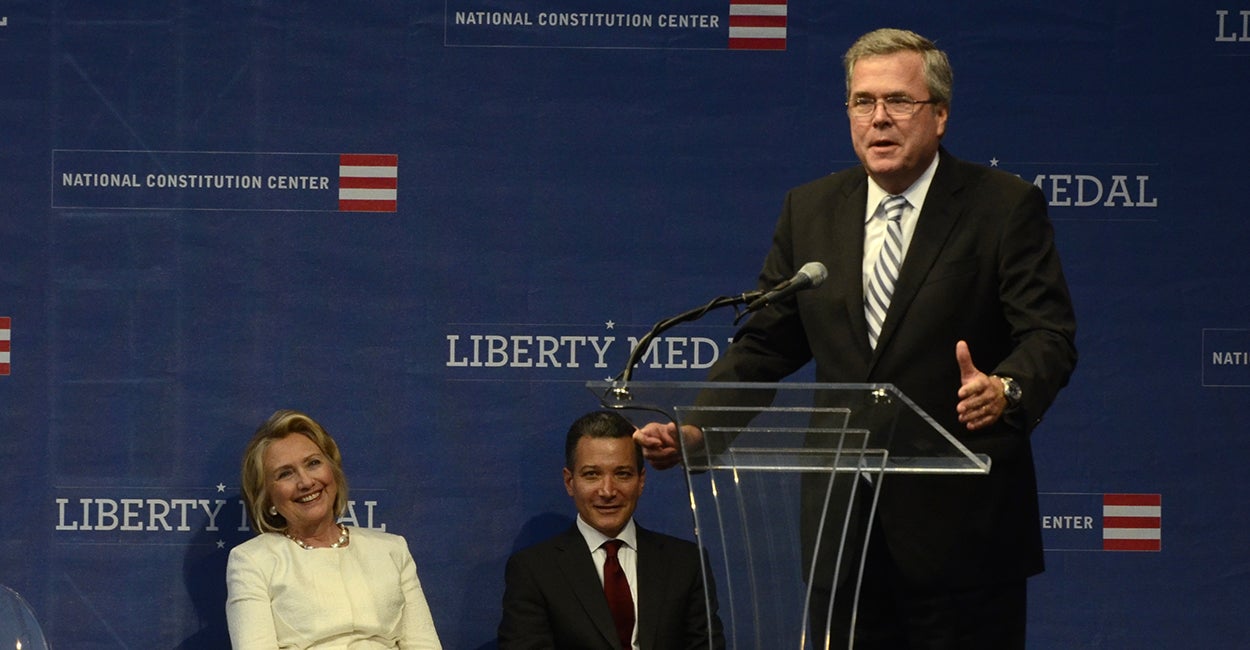 Allow me to unite America's left, right and center in just three words: No, Jeb, No.

Former GOP Florida governor Jeb Bush made the obvious official this week when he announced on Facebook that he's "actively exploring" a 2016 White House run. Of course, he's running. That's what inveterate politicians do.

Well, I hate to break it to Jeb Inc. There's no popular groundswell for Bush Part III. None, zip, nada. Independents, progressives and conservatives are all weary of the entrenched bipartisan dynasties that rule Washington and ruin America. Only in the hallowed bubble of D.C. and New York City elites does a Jeb Bush presidential bid make any sense.

Jeb's indulgent (and ultimately doomed) enterprise has three privileged constituencies: Big Business, Big Government and Big Media. This iron triumvirate explains how the failed campaigns of so-called "pragmatic," "thoughtful" and "moooooderate" liberal Republican candidates such as John McCain, Jon Huntsman and Bob Dole ever got off the ground. The "Reasonable Republican," anointed and enabled by the statist Big Three, serves as a useful tool for bashing conservatives and marginalizing conservatism.

For Republicans who argue that Jeb is the most "electable" choice, I ask: What planet are you on? After two disastrous terms of Barack Obama's Hope and Change Theater, the last thing the Republican Party needs is an establishment poster child for Washington business as usual. I mean, really? A third Bush who's been working for his dad, his dad's friends or the government since 1980?

A Beltway-ensconced scion so chummy with the Clinton family that he awarded close family friend—and potential 2016 nemesis—Hillary a "Liberty Medal" last year as chairman of the National Constitution Center?

To blunt criticism from the grassroots base on the right, Jeb's cheerleaders at the Wall Street Journal cite his "conservative" gubernatorial record of cutting taxes and privatizing jobs. So we're supposed to swoon when a GOP governor acts like he's supposed to act on standard, bread-and-butter GOP issues? Whoop-de-doo.

One thing Jeb's promoters won't be emphasizing: Over the course of his eight years in the Florida governor's mansion, government spending skyrocketed. The libertarian Cato Institute notes that Florida general fund spending "increased from $18.0 billion to $28.2 billion during those eight years, or 57 percent" and that "(t)otal state spending increased from $45.6 billion to $66.1 billion, or 45 percent."

I have another interpretation of Bush's "conservative" Florida years: It's called biding his time. Yes, Jeb put in his obligatorily GOP service on taxes and the Second Amendment. Not because he was wedded to deep-rooted principles, mind you. But because the "conservative" facade will come in handy during the primaries when he has to defend radical, divisive positions on his two defining national policy issues: Education and immigration.

Jeb Bush's agenda is neither left nor right. His agenda is the agenda of the D.C. headquarters of the U.S. Chamber of Commerce. Remember: The chamber is a politically entrenched synod of bipartisan special interests. As I've said before, these fat cats do not represent the best interests of American entrepreneurs, American workers, American parents and students or Americans of any race, class or age who believe in low taxes and limited government.

The chamber's business is the big business of the Beltway, not the business of mainstream America. And so is Jeb Bush's.

The Chamber supports the top-down, privacy-undermining, local autonomy-sabotaging Common Core racket. Jeb Bush spearheaded and profited from Common Core—and accuses those of us who oppose it of opposing academic excellence for our own children. Jeb's problem isn't just Common Core. It's that he has no core. Instead of retreating from the costly federalized scheme that has alienated teachers, administrators and parents of all backgrounds, Bush has doubled down with his Fed Ed control freak allies and corporate donors.

The reign of Obama ushered in massive cronyism, corporate favoritism and Boomtown boondoggles galore. We've lived too long already under the boot of arrogant D.C. bureaucrats who've exploited their power to serve their friends.