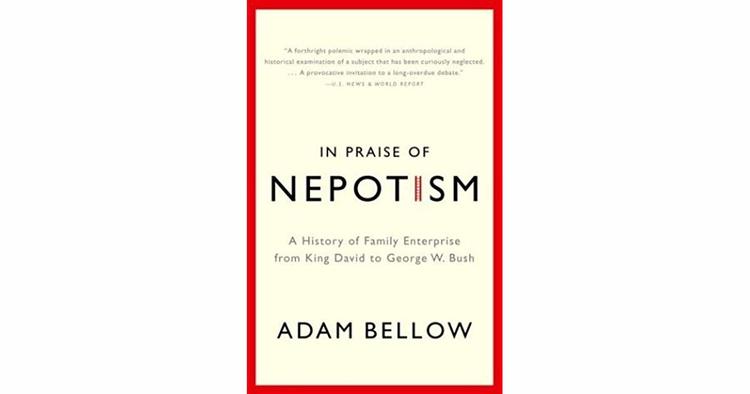 . The critics seem to have been hoping for a snotty memoir of growing up privileged, as the son of Nobel Laureate novelist Saul Bellow—larded with those semi-scandalous literary-life anecdotes that fascinate journalists, but nobody else.

You know, the inside scoop on what Christopher Hitchens said to Martin Amis and Tina Brown just before vomiting into the umbrella stand.

(If that's what you're looking for, read the wildly funny quasi-autobiography How to Lose Friends and Alienate People by the Honorable Toby Young, ne'er-do-well hack son of Michael, Lord Young, the estimable leftish social scientist who—ironically enough—coined the term "meritocracy.")

If Bellow had given the reviewers what they wanted, they could have expressed ritual shock and horror that anybody would say anything positive about nepotism, then gotten back to schmoozing their brother-in-law's uncle about helping them get their three-year-old into that ultra-exclusive Manhattan preschool.

In contrast, however, Bellow has delivered a huge, profoundly serious book. He declares nepotism to be "the bedrock of social existence" and traces the history of altruism toward kin, pro and con, from the great apes to the Kennedy family. (Which from Bellow's sociobiological perspective, isn't that big a leap).

Bellow's book grew heroically after the first time Adam told me about it in 2000. Then, he was merely planning a short, polemical book on the model of William A. Henry's In Defense of Elitism.

Being the son of Ernie Sailer, Lockheed stress engineer, I've never been particularly enthusiastic about nepotism. (And Bellow really is more even-handed than his title implies). But Adam and I have got along swimmingly because we were both fascinated by the trend in contemporary America—wholly unanticipated—toward more family dynasties.

The 2000 Bush vs. Gore race exemplifies the tendency in politics. But it is equally strong in the movies. "In the 1960s and 1970s there were dozens of second-generation actors," Bellow writes. "Today, there are hundreds — far too many to list ... Family ties also prevail among producers, directors, and writers."

For example, as the film critic for UPI and The American Conservative, I'm working on a review of Matchstick Men, the first major release aimed at grown-ups after the summer-long action-film explosion-fest. Matchstick Men stars Oscar-winner Nicolas Cage (whose real last name is Coppola, as in The Godfather's Francis Ford Coppola, his uncle). It's directed by Ridley (Alien, Black Hawk Down) Scott, whose brother and business partner is fellow director Tony (Top Gun) Scott. It's written by Ted (Ocean's Eleven) Griffin and his brother Nicholas.

I asked an agent why there are so many brother teams behind the scenes in Hollywood these days (other examples: the Wachowskis, Farrellys, Coens, Weitzes, Wayans).

"Who else can you trust?" he shrugged.

Brother acts are so fashionable in Hollywood today that somebody should make a movie about a screenwriter who can't get hired in Hollywood until he makes up a fictional brother for himself. I'd write it myself, except I don't have a brother ... Hey, that gives me an idea...

Anyway, the weird thing is that these beneficiaries of Hollywood nepotism in Matchstick Men are talented—some of them terrifically so.

Bellow calls this "The New Nepotism"—where family ties help people get their foot in the door, but then prove themselves.

The extremely weird thing: just since 1990, baseball has become overrun by second and third generation stars—even though the sport is utterly meritocratic. Pitchers don't throw hanging curveballs to the great Barry Bonds just because his late father Bobby was once a star.

I sent Adam a few lists of dynasties in various profession, including the dominant families in the big money business of golf course architecture—the Joneses, the Fazios, and the Dyes. (Amusingly, this outraged Chris Lehman, the Washington Post reviewer. He couldn't believe that Bellow would mention a profession so "trivial" as the one that has reshaped a million or two acres of America's landscape.)

"I discovered that my subject was much richer and more complex than I had thought. In order to have anything intelligent to say about nepotism, I had to understand the nature of kinship, and in order to grasp the nature and uses of kinship, I had to know something about human evolution and social development."

Bellow's critics complained that he uses "nepotism" too broadly. However, he is thinking like a behavioral geneticist. Nepotism, sacrificing for your relatives, was the root concept underlying the development of sociobiology.

Thus, when asked whether he would give his life to save his brother, the biologist J.B.S. Haldane quipped: "No, but I would to save two brothers or eight cousins."

Subsequently, William D. Hamilton fleshed out the reality behind Haldane's joke. Individuals share 50 percent of their variable genes with their children, siblings, and parents, 25 percent with their grandchildren, nephews/nieces, and grandparents, 12.5 percent with their first cousins…and so forth. Thus they have a Darwinian incentive to help spread their common genes by sacrificing some of their own fitness for their relations.

Of course, nepotism can impose costs on others. For example, a business owner can altruistically decide to lower his profits by giving his incompetent nephew a job, hurting other workers and customers. But the defining aspect of nepotism, from a scientific perspective, is not hurting outsiders for your relatives—but hurting yourself.

If nepotism is innate, why is there so much conflict within families?

Because the flip side of Hamiltonian altruism toward kin is sibling rivalry. Say you have two young sons. Because they share half of their genes, they have a tendency to be close allies against the outside world. But, because they don't share the other half, they each have a tendency to be archrivals for goodies available within the family. That means frequents fights over who holds the TV remote control, who rides in the front seat…and, eventually, they may go to court over your will.

The most famous tragedies of Western civilization, such as Oedipus Rex, King Lear, and The Godfather (which Bellow analyzes here) are cathartic precisely because both the urges to cooperate and to clash are so strong within a family.

American political discourse tends to be the hopelessly naive about the importance of kin networks.

But the costs of cluelessness are high. For instance, America's immigration system doesn't work as its Congressional authors predicted because the extended families of the Third World hijacked the so-called family reunification provision—and turned it into a massive engine of endless chain migration.

[VDARE.COM NOTE: the Senate floor manager of the 1965 Immigration Act was nepotism's worst case example, Teddy Kennedy, who more or less inherited JFK's Massachusetts Senate seat in 1962 at the age of 30, the youngest age at which the Constitution would allow him to serve. Nothing he's done since, privately or publicly, has been as disastrous.]