"Is This A Sovereign Nation / Or Just A Police State?" Eric Clapton, COVID, And Immigration

Rock virtuoso Eric Clapton is learning the hard way that challenging the Leftist Narrative in 2022 is dangerous. For the last year or so, he has been singing and speaking against mandatory Flu Manchu vaccines and other totalitarian virus diktats. His reward has not, however, been applause for Raging Against The Machine, for Speaking Truth To Power, or, as they used to say when Clapton was becoming one of the brightest stars in Rock n’ Roll’s firmament, having the courage to Question Authority. Instead, the Thought Police have dredged up that he spoke in colorful terms in favor of the great British anti-immigration patriot Enoch Powell 45 years ago. Thought crimes, of course, have no statute of limitations.

“I took the first jab of AZ and straight away had severe reactions which lasted ten days. I recovered eventually and was told it would be twelve weeks before the second one,” Clapton wrote:

About six weeks later I was offered and took the second AZ shot, but with a little more knowledge of the dangers. Needless to say the reactions were disastrous, my hands and feet were either frozen, numb or burning, and pretty much useless for two weeks, I feared I would never play again, (I suffer with peripheral neuropathy and should never have gone near the needle.) But the propaganda said the vaccine was safe for everyone.

The experience caused him to rethink whether immunization is necessary and whether mandated vaccines and “social distancing” are worth the loss of liberty. In solidarity with musicians who couldn’t find live gigs, he now won’t perform at venues that require proof of vaccination.

Proceeds from the song go to Morrison’s Save Live Music campaign. Morrison’s other inspiring anti-authoritarian protest songs include “Big Lie“ and “Why Are You on Facebook?“

But joining what Leftists call “anti-vaxxers” and “science-deniers” has come with a price for Clapton. A major hit piece in Rolling Stone reminded readers, especially younger ones, that Clapton’s disgust with COVID-19 lockdowns is part of  a history of unacceptable (i.e., Right-leaning) comments, specifically support for Powell (a “flamethrower and fascist” to Rolling Stone) way back in 1976 [Eric Clapton Isn’t Just Spouting Vaccine Nonsense—He’s Bankrolling It, by David Browne, October 10, 2021].

Similarly, the Washington Post delivered an “investigative piece” in November that included interviews with friends and associates of Clapton. They wondered if he had gone off the deep end given his views on the virus, and of course, race and immigration [What Happened to Eric Clapton?, by Geoff Edgers, November 11, 2021].

What I do know is that – despite whatever technical guitar skills Clapton may still possess – it’s impossible anymore to appreciate any higher beauty or soul in his music given the obvious hate that lives in the man’s heart.

Another blogger you’ve never heard of, 773SleepyHollow, added this to Ybarra’s lament:

Powell’s comments were still relevant to Clapton in 2007… in other words, Clapton was still a worthless racist pig.… I’ll cheer when he drops dead.

As for Eric Clapton, he may have apologized forty years after his drunken racist rants, but I’ll take him seriously when he admits he spent the late-70s publicly endorsing a Nazi [i.e., Enoch Powell]. And you know what they say about people that support Nazis.

Clapton is a great example of what happens when you give virulent racists the opportunity to “redeem” themselves (they don’t).

Clapton is a great example of what happens when you give virulent racists the opportunity to 'redeem' themselves (they don't).

On the plus side, maybe more people will find out that Eric Clapton is a racist asshole now!

On the plus side, maybe more people will find out that Eric Clapton is a racist asshole now!

What did Clapton actually do? Flash back to August 5, 1976 and Clapton’s performance at the Birmingham Odeon. Professionally, he enjoyed fair winds and following seas. But his private life was sinking. He’d conquered heroin a few years earlier, but the coke and booze were out of control. 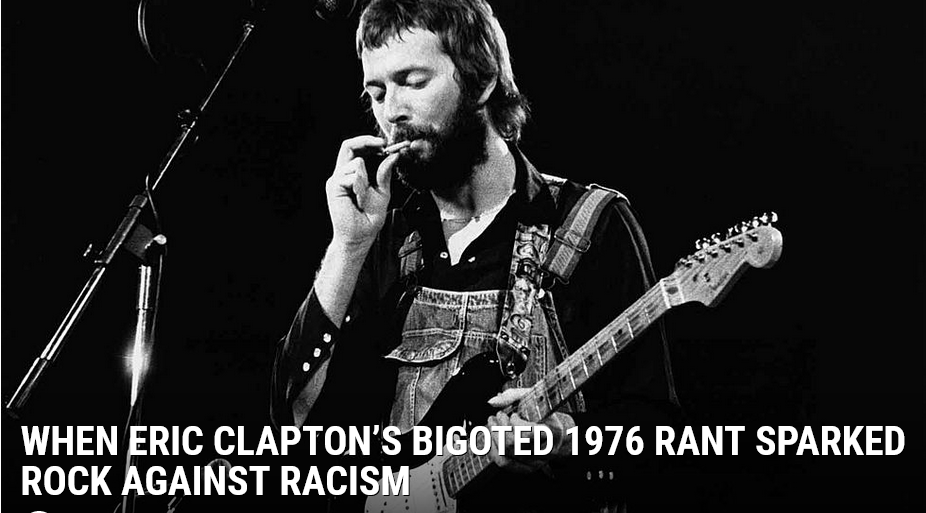 During a monologue between songs, he poured out his frustrations:

Listen to me, man! I think we should vote for Enoch Powell. Enoch’s our man. I think Enoch’s right, I think we should send them all back. Stop Britain from becoming a black colony. Get the foreigners out. Get the wogs out. Get the coons out. Keep Britain white. I used to be into dope, now I’m into racism. It’s much heavier, man. F*cking wogs, man. F*cking Saudis taking over London. Bastard wogs. Britain is becoming overcrowded and Enoch will stop it and send them all back.

Powell, of course, was famous—or notorious, Leftists would say—for his so-called “Rivers of Blood” speech in April 1968. He spoke the unspeakable: High levels of unassimilable nonwhite immigrants were killing public safety, political morale and cultural identity. A high degree of ethno-racial homogeneity is crucial to maintaining a national identity. And far from advocating bloodshed, Powell dreaded it. Needless to say, Powell’s fellow Tories panicked. The next day, party leader and future Prime Minister Edward Heath removed him from his Shadow Cabinet. But Powell remained a looming Voldermort-like presence in British politics for many years and actually came much closer to getting revenge on Heath than is generally recognized:

Clapton did indeed subsequently grovel. “I sabotaged everything I got involved with,” he recalled for a biographical documentary in 2017, Eric Clapton: Life in 12 Bars:

I was so ashamed of who I was, a kind of semi-racist, which didn’t make sense. Half of my friends were black, I dated a black woman, and I championed black music.

[Eric Clapton Apologizes for Racist Past: ‘I Sabotaged Everything,’ by Tom Sykes, Daily Beast, January 12, 2018]

Perhaps if Clapton had moderated his tone at the Odeon, he might have struck an effective blow for British identity. But he didn’t, and so landed in the hot seat. So, by the way, did another extraordinary British rocker, David Bowie, who for whatever reason uttered some alarming pro-Nazi comments during his Thin White Duke period that he eventually retracted [Golden years: David Bowie and the Third Reich, by Jantine, Medium.com, April 14, 2018]. 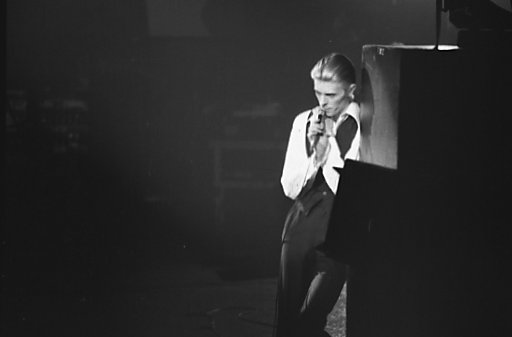 Reacting to the two, and the growing popularity of the National Front, radical Leftists formed Rock Against Racism. During its roughly six years of existence, it opened two hundred chapters in Britain alone and many others abroad. Working with the fledgling Anti-Nazi League, an antifa-like (they had goon squads to beat up people they considered Nazis) project of the communist Socialist Workers Party, RAR organized rallies, marches, concerts, and news conferences. In 1978, RAR sponsored two large-scale “carnivals” in London. In April, some 100,000 people marched six miles from Trafalgar Square to Victoria Park in Hackney to hear the Clash, Steel Pulse and other bands. In September, a similar-sized crowd marched from Hyde Park to Brockwell Park in Brixton to hear Elvis Costello, Stiff Little Fingers, and other acts.

There was more than music at stake. RAR cofounder and spokesman Red Saunders, a photographer and album cover artist, explained in a 1976 open letter to Clapton that appeared in New Musical Express and other publications:

When I read about Eric Clapton’s Birmingham concert when he urged support for Enoch Powell, I nearly puked. What’s going on, Eric? You’ve got a touch of brain damage. So, you’re going to stand for MP (Powell) and you think we’re being colonised by black people. Come on…you’ve been taking too much of that Daily Express stuff, you know you can’t handle it. Own up. Half your music is black. You’re rock music’s biggest colonist. You’re a good musician but where would you be without the blues and R&B?

Superficially, Saunders had a point. But being influenced by blacks does not require support for their unlimited admission to England. An ability to play hot blues and reggae licks is not a mandate to blind oneself to rampant dysfunctional behavior—especially the criminal kind—among African and Caribbean immigrants.

The Third World crime problem in England was evident back then, and it has remained at least as bad today. Data obtained by Sky News show that blacks were 13 percent of London’s population yet constituted 48 percent of all murder suspects [Black murder victims and suspects: London v UK, July 25, 2018]. For all of England, the figures were 3 and 13 percent.

Clapton still hasn’t entirely disavowed Powell. In a 2004 interview with the British music magazine Uncut, he termed Powell “outrageously brave,” adding that the UK was “inviting people in as cheap labor and then putting them in ghettos” [Eric Clapton, SoundHistoria.org].

The latest threats won’t cancel the careers of Clapton, Morrison and other well-established dissenting musicians such as Stephen Morrissey. They’ve been recording and touring for decades, are financially secure, and have large and loyal audiences. Clapton and Morrison are well into their 70s, and Morrissey is in his early 60s.

But with relatively unknown acts, it’s a different story. The current media pile-on can only be seen as a massive warning to musicians who lack name recognition and deep pockets. Without opportunities to play live, they have ever more need to secure exclusive contracts with video streaming giants such as Spotify, Amazon and YouTube. While these deals can be lucrative, they may also induce the musicians to carefully police their own lyrics and utterances to avoid de-platforming. Self-censorship is still censorship.

Anti-racist radicals do get results. Through boycotts, lawsuits, demonstrations, crowdfunding, torch-bearing Twitter mobs, and face-to-face shakedowns, they’ve captured most of higher education. They also control music and entertainment. In October, Leftist Ministry of Truthers mau-maued the Rolling Stones into dropping Brown Sugar from their U.S. tour because of its “racist” lyrics about slavery and interracial sex [Rolling Stones drop Brown Sugar from US tour set list, BBC.com, October 13, 2021]. If they can force the Stones of all people to surrender, no musician is safe.

Is self-censorship the price for a musical career? Van Morrison and Eric Clapton emphatically say no. Let these lyrics from “Stand and Deliver” be the last word:

Is this a sovereign nation
Or just a police state?
You better look out, people
Before it gets too late.

Carl Horowitz [Email him] is a veteran Washington, D.C.-area writer on immigration and other issues.